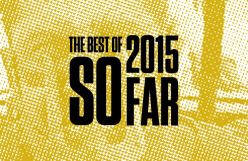 As Summer fades and Fall creeps in, the quality of movies goes up exponentially. We get the pushes and campaigns for awards glory, as well as a slew of films that will go unnoticed but leave an everlasting mark. I realize it is past mid-year, but in terms of worthwhile releases, we’re only about halfway through. As such, here are the films I most look forward to, and quick lists of my favorite and most hated movies so far in 2015.

Most Anticipated Movies (in order of release date):

Stations of the Cross – Shown in 14 fixed-angle scenes, representing the 14 tableaus of Christ’s path to crucifixion, Stations of the Cross is a rather simple story. One of a devout young girl finding her place in a rigid faith (the reasoning for the immobile and unwavering camera). The film seems to respect and critique religion all at once, and looks to have a powerful artistry to it.

Phoenix – In the vein of the classics from the 40’s and 50’s with the added depravity of foreign cinema, Phoenix is a mystery through and through. The story centers on a woman in post-World War II Germany, facially disfigured before reconstructive surgery. She hides the reveal from her husband, opting to instead follow him and test his loyalty then and now. Some of our best films investigate natural human fragility and deception, and Phoenix certainly appears to attempt that.

Black Mass – I can only hope, and pray, that Black Mass is our long-awaited return to form for the iconic Johnny Depp. From the trailer alone, it’s clear Depp has channeled an unnerving and droll depiction of lifetime criminal Whitey Bulger. With an outstanding ensemble cast, this should be a reawakening of Depp’s career, as well as another notable addition to Scott Cooper’s promising directorial credits.

Legend – You can’t go wrong with the formidable Tom Hardy, and in Legend we get a double-dose of his talent playing identical twin gangsters. Honestly, the movie seems a little scattershot, but I don’t care about that. It is important in any creative field that people push themselves. Hardy strives to do so here, and with results that should prove to be both entertaining and enthralling.

Victoria – The only reason this movie is on my radar is because it was shot in a single take. But what’s more interesting is that, unlike other efforts with this demanding format, Victoria has a depth of story and place and time, and attempts to move throughout itself. Even if the movie is only fair, I love to see the quest to challenge the boundaries of capturing cinema.

Steve Jobs – Like some of the other films I have noted, Steve Jobs is very anti-cinema, staged in a fashion similar to Hitchcock’s classic Rope. The revolutionary Jobs has his life reduced down to three events, all keynote addresses introducing new game-changing products. With a script by Aaron Sorkin, directing by Academy Award nominee Danny Boyle, and the lead of the fastidious Michael Fassbender, this triptych film should play well.

Room – Another movie from the unstoppable A24 Productions, Room is my most anticipated film of the year. Starring the incomparably talented Brie Larson and adapted from the gripping, gut-wrenching novel of the same name, this film screams emotion, affection, and a raw intimacy. This is the kind of story everyone will love. The only question is how much.

The Lobster – From the twisted mind of Yorgos Lanthimos, helmer of the disquieting Dogtooth in 2009, The Lobster should be another addition to his filmography of the strange and the intoxicating. It’s dystopian, metaphorical, and complex. I dare you to read its log line and not be interested. Below is just a clip, as a trailer has not yet been released. Regardless, you know what you’re getting into.

Brooklyn – Anymore, my favorite movies center on women. Because, as a man, the story is simply different and unlike anything I know. The themes are, by nature, more complicated, resulting in more personal stories. Brooklyn blends the pieces of classical movies with a kind of braced yet buckling knee, uncertain of just what’s right or what’s wrong. It may seem hokey, but I guarantee that this movie, scripted by Nick Hornby, will stick with you.

Secret in Their Eyes – A remake of Juan Jose Campanella’s 2010 feature of the same name (which you should see immediately), this movie will be boom or bust. It has an incredible cast, is written and directed by the talented Billy Ray, and is inspired by the film that came before. The original’s ending is beyond definition, getting so far beneath your skin that it cannot be ignored. Maybe this can do the same.

The Revenant – Technically only getting a limited release this year, The Revenant is a film with high expectations because of its resume and daunting story. DiCaprio and Tom Hardy, directed by the limitlessly creative Alejandro Gonzalez Inarritu, all shot by one of our best modern cinematographers in Emmanuel Lubezki. This is a harrowing tale with as little dialogue as possible, and I can’t wait to see if the ambition matches the final product.