“What are we willing to do for love?”

5 to 7 is a little romantic indie that is so under the radar, will go so underseen and unappreciated, that many people won’t even know it exists. That’s a shame, because I loved this whimsy of a movie. Romantic films have the natural ability to generate empathy unlike any other genre. Its inherent realness, its vulnerabilities and insecurities, its search for truth through love, they’re all emotions and actions we can identify with on a deeply personal level. And what makes 5 to 7 work so well is its committed honesty, its tremendous score, and its attention to minute detail. Try to find this funny, rich, and moving movie…you’ll love it. 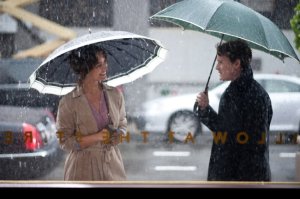 Anton Yelchin stars as Brian, a young and hopeful writer living in Manhattan. Rejection letters from every editorial in the city serve as the wallpaper to his small-scale and high-priced New York apartment. Brian’s life in unremarkable. But as we’ve seen so many times over the course of cinema’s rich love affair with the Big Apple, the city itself serves as a matchmaker. He spots Arielle (Bérénice Marlohe) standing outside, alone, oozing so much French sex appeal you’d swear she was a model holding a pack of Gauloises. With the confidence of a matador, Brian starts a conversation with Arielle, and the man and woman, a decade apart, strike up a love affair. 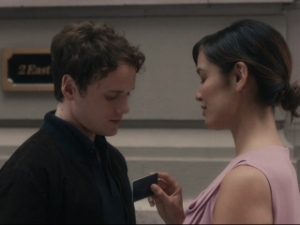 The title refers to the hours which Arielle is free to spend with Brian. You see, she is happily married and with children. But like her husband, they give each other a bit of a dispensation, or what Americans would call a hall pass. In a lovely scene, the older and wiser Arielle explains to Brian what 5 to 7 means, how it applies to them, and why they both should be comfortable with the situation. It’s done in one long take, and as they get closer and more discernible, the circumstances become clearer. The shot choice emphasizes our country’s narrowly defined sexuality and butts it right up against the more complex and mature European sensibilities. It may seem cliché, but it’s certainly real. Arielle even says to Brian, “Maybe your culture needs to grow. Maybe there are other ways to look at life.” 5 to 7 helps us to see that.

I’ve read multiple reviews saying that this film is another sexist example of male wish-fulfillment. It’s not sexist, and saying such just makes them sound like a dumb millennial searching for profundities through words with an “ism” suffix. Secondly, this is not just from the male perspective. Brian is the central character, but I would argue that Yelchin plays him less as a leading man and more as a portrait of emotion and understanding. These two leads are actually separated by ten years in real life and makes it feel authentic. So yeah, it’s any man’s dream come true to court a woman as stunningly gorgeous as Marlohe. Isn’t it also some women’s dreams to land a younger, more enthusiastic and love hungry man? 5 to 7 swings from both sides of the plate and never compromises its characters or their actions. They are who they are, they do what they do, and their inevitably love-lost journey is one we see unfold before us in nearly poetic prose.

Writer/director Victor Levin’s feature film debut is the sum of its moving parts as much as it is a reflection of the films which inspired it. There are hints of Woody Allen. More childish glimpses of Richard Linklater’s historical Before Trilogy. And I saw a lot of 1979’s A Little Romance in its mixture of American and European ideals. Like that film, which introduced us to the talent of Diane Lane, 5 to 7 is an exemplary piece of acting. I’m a staunch believer in the talent of Anton Yelchin. He just has this humbled, reserved approach to him that makes everything he does endearing. And Marlohe is an obvious talent. She has to be one of the most beautiful women on the planet, yet she also has a calm and collected screen presence that exudes incredible intimacy. 5 to 7 is a little labored, a little too tritely wordy for its own good, and features an unnecessary character played by Olivia Thirlby. But it’s also so raw and real that it hurts. It makes you feel what they feel, think what they think, know what they know. And that in and of itself is an absolute achievement.

“Your favorite story – whatever it may be – was written for one reader.”