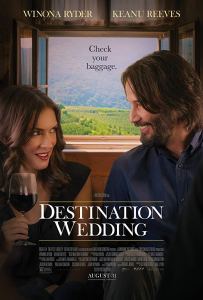 A dark romantic comedy best suited for masochists, Destination Wedding celebrates the immense amount of pain that it imparts on the audience. It’s the furthest thing from romantic, and only occasionally scrapes the surface of anything resembling humor. What starts out as a deeply mean-spirited, misanthropic, meandering movie ends just the same as we first meet it, and the stagnation is absolutely maddening to watch. Nothing important ever really happens on-screen, which makes Destination Wedding even more painful to sit through, because closing your eyes and leaning in for a listen proves to be even worse. I loathe very few movies. This is one. 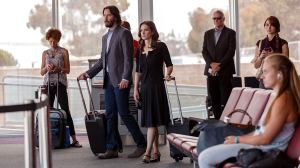 Frank (Keanu Reeves) and Lindsay (Winona Ryder) first meet in the airport, confronting each other almost immediately. There’s enough friction and tension between the pair to spontaneously combust into flames. Onto the same small plane they go, seated next to one another, jettisoned off to the same California wedding weekend. Lindsay is the ex to Frank’s brother, the groom getting hitched. You’d think they could make small talk, yet most of the conversation is fueled by hatred and judgement. That is – quite literally – what comprises every scene in Destination Wedding, and it’s what makes the film such a diluted, ugly bore. These people complain and whine and moan and try to sound smart, but we never get a glimpse into who they really are. I’ve honestly had more organic conversations with my Amazon Alexa speaker.

There are other characters in the movie we don’t get to meet, and yet they feel as full and authentic as the two curmudgeons at its core. Destination Wedding wastes its leads and completely sours their honest chemistry by presenting them as hardened, insincere, pickled versions of real people. You’ve never participated in or heard other individuals have a conversation that sounds the least bit like the way Frank and Lindsay communicate, and that’s because the dialogue is so trite and so premeditated, so rehearsed and devoid of feeling. I understand that the film wants to be an anti-comedy and that it wants to stir and shake the process of flirting, yet the abysmal script sinks both Reeves and Ryder into one-dimensional, irredeemable roles. We don’t want them to fall in love. We just want them to shut the hell up.

I was profoundly disappointed by this film from Victor Levin. Back in 2015, he wrote and directed the delightful, charming, insightful 5 to 7. It was one of my favorites of the year, and proved to be a great movie which, for the most part, simply tags along with two vastly different people as they talk and walk and fall in love. With Destination Wedding, he’s written two identical Grinch personas who barely grow hearts by the time the credits roll, and it falsely condemns the proprietary ingredients of the standard Rom-Com because its bullheaded approach still adheres to every trope and cliché. Destination Wedding might be the most meaningless, voiceless, empty movie I’ve seen this year, and the fact that the film never stops talking doesn’t help a bit.