“It hunts people for sport.”

Inspired by 80’s aesthetics and dressed from head to toe in the era’s garb, The Predator is a modern fanboy’s love letter to the kind of politically incorrect action films that we don’t see very often, quite possibly for rightful reason. And if you want to boil the entire experience of the movie down into three and a half minutes, listen to AC/DC’s rock anthem “TNT.” The song starts with that famously brash chord, segues into a simple chorus that’s easily remembered, and then it ends in complete disarray, attempting to melt our faces off through sheer force. The Predator might as well be the film equivalent of this song and its overcompensating effort. The movie is fantastic, even bordering on great until the vocals are drowned out by the loud, desultory disaster of a bad third act. We sing along until the guitar solo becomes too indulgent and out of tune. 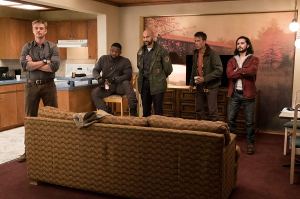 The Predator has a lazy separation of dual story lines. On one side is Rory McKenna (Jacob Tremblay), a bullied and brilliant young man diagnosed with Autism. He serves as the movie’s brains. For the muscle we have his absent Father Quinn (Boyd Holbrook), an Army Ranger whose team is decimated and decapitated by a single, deadly alien species. Quinn swipes gear from the alien, mails it home, and the inquisitive Rory deciphers the foreign language. Meanwhile, Quinn gets locked up in a bus with a bunch of convicts. Nebraska (Trevante Rhodes) turned his gun on himself, Coyle (Keegan-Michael Key) cracks jokes to thin the air, Baxley (Thomas Jane in a very miscalculated performance) has Tourette’s. There are a few more guys but they have no real arc or personality. While 1987’s Predator was a film about the savagery of guerrilla warfare, The Predator expands upon the standard buddy-cop comedy formula and gives it a significantly darker sci-fi edge. The results range from great to mixed to underwhelming, but at least it’s daring enough to try something new. 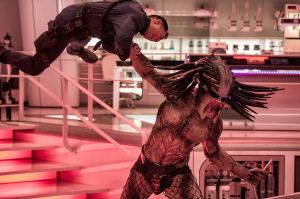 Sterling K. Brown plays Traeger, a government official with no perceivable intent. He wants to capture the Predator, examine it, even recruiting biologist Casey Bracket (Olivia Munn) to come study the extra-terrestrial. The beast breaks free, slits throats and slashes wounds on nameless scientists, and while the alien is out on the loose, Quinn’s new team meets up with Dr. Bracket. The Predator is a reliably good film up to this point. It’s funny, razor-sharp, and it pulls absolutely no punches. What makes the first hour such a blast is its deft blend of convention and reinvention. Henry Jackman’s musical score resembles the brass heavy swoops and scoops of the Amblin era films from Steven Spielberg. Quite opposite that – especially given the R-rating – is a film full of Shane Black’s classically cocksure dialogue. The Predator feels familiar because the ingredients are separate, and it’s incongruous because they never quite gel together. It’s funny, exhilarating, dramatic, and irreverent, but never all at the same time.

Now older and wiser than when he first broke onto the Hollywood scene in a huge way some decades ago, it’s apparent that Shane Black was inspired by a great, invigorating idea for The Predator without having the faintest sense of how to end the story. Here he replaces his typical yuletide atmosphere for one set during Halloween, and while it invites costumed playfulness, everything still dissolves into darkness, substituting gunfights in a recipe that’s better suited for fisticuffs and shrewd creativity, and the final 30 minutes somehow become the antithesis of what came before it, both in real-time and in this pseudo franchise. The Predator gives a great first impression, sails on the coattails of the strong open for far too long, and eventually falls back down to Earth with one enormous thud. Like a leap off the high dive, the movie emptily encourages our bravery as we step towards the end of the board. And so we jump with great faith and land in a belly flop from two stories up, hitting the water as if it were concrete. The Predator might look graceful, but boy does it flub the landing.

“They’ve been here before.”