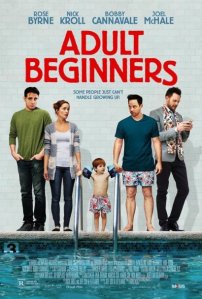 “I can’t hear you mope anymore.”

Adult Beginners has the solid pedigree low-brow/budget movies all want. It has the great cast. It has the Duplass brothers, kings of independent filmmaking, on board as producers. What it doesn’t have is anything likable, relateable, or worthy of a feature film. The runtime barely squeaks by the bare minimum 90 min standard for dramedies, and even then it’s a grueling slapfest you can’t wait to be done with. There is a tired trend in recent cinema of an immature and beaten manchild who only leaves his corner and gets off the ropes with guidance from, in nearly every case, a romantic female interest. Adult Beginners applies it to siblings, and it ends up being pointless, mean-spirited, and barren of laughs or drama. I’d think of a more descriptive word to call it than just bad, but then again, it doesn’t even deserve that much effort.

The manchild I’m referring to is Jake (Nick Kroll), a west coast tech entrepreneur who thinks he’s about to hit it big with MindsI (Google glass, pretty much.) Things fall through, he goes broke, loses all of his investors’ money, and winds up inviting himself into his sister’s home for a 3 month long stay. She is Justine (Rose Byrne), mother of 3 year old Teddy with another pie in the oven. Her quaint, quiet, and boring life is lived with her husband Danny (Bobby Cannavale) in the sibling’s childhood home. Jake as a character is a feeble-minded and irrationally immature guy, not man, who bursts into the lives of two seemingly content adults. I’m trying to find positives to write about, and save for the winning performance by Cannavale, there is nothing else to be said. 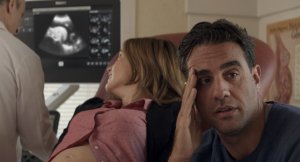 However, when it comes to complete undoings, Adult Beginners reaps what it sows. Remember last year’s The Skeleton Twins? It’s a film that I deeply admired. There was great cast chemistry, genuinely hilarious laughs, and up close introspection on the strains of family and life. Adult Beginners copies that movie on every single level. Two siblings whose names start with the same letter, because everyone does that. A dark past involving their mother. A delirious husband who is only a handyman, a woman seeking control but unable to find it, and an unhinged drama queen of a brother who can’t function as a normal person. Even both endings, heavily leaning on a leap of faith plunging below the water’s surface to get over their fears is mimicked. This is the forged copycat of a bill that can’t even pass being held up to the light before it’s found out.

So why is Adult Beginners so much worse than the movie I ranked in the top 50 films I saw last year? Because this is babbled, soulless, dumpster can quality storytelling and performing. Kroll is especially horrible with a character who at one minute is using his Nephew’s potty to take a dump and the next reading him a story like an irreverent Mr. Rogers who didn’t bother to take his shoes off. He’s emotionally bipolar, going from doting Uncle to sadsack boozer with no purpose or meaning, no character arc or progression. Jake is the kind of guy you give up on because you know he can’t change, and you soon realize that’s a reflection of Kroll’s performance and the picture itself.

What about Byrne and Cannavale? As I mentioned, he’s good as the husband, even if his character admits to an affair while maintaining that “he’s happy!”…I wasn’t buying it. Then there is Byrne, who is as uninvolved and expressionless as I have seen her. Justine is a worrywart nitpicker who drinks while pregnant, once even publicly with one of her high school students. These people have not been thought through or even registered a zero on an IQ test. They are dumb, flat, and unpurposed lumps of clay that the production team never bothered to mold. Meanwhile, 3 year old Teddy gives the best, and probably the most mature performance of anyone who reported to this merciless, childish story of adolescence lived by “grown ups.” I hated this film, mostly because there is nothing here to love, admire, or even think about. I’m tired of the adult acting like a child trope. It’s not cute or endearing…it’s disrespectful, and above all dishonorable. Adult Beginners begs to be loathed. I for one happily submitted to it’s frantic, tug at your pant-seam longing not only to be bad, but to be cruel, selfish, and reductive.