“What did we do to deserve you?”

Every once in a while a film comes along that fundamentally changes who you are. It helps you to grow, adapt, to learn and to love. In my year and a half of film criticism, this has by far been my hardest review. That’s because Inside Out, a PG Pixar movie aimed at children, is one of the most challenging and complex movies you can see. It’s emotionally manipulative while being gentle and wise. And it’s too smart for its own good. Which, ironically, is an absolutely brilliant attribute to have. This is life animated…literally. Pixar’s latest feature is not only just a rare moviegoing experience; it is a rare life event. One that makes you realistically rehash your own past as well as look forward to what the future may potentially hold. Inside Out accomplishes in 2 hours what most psychoanalysts can’t over a lifetime of sessions. You will be hard pressed to see a better movie this year or any other. 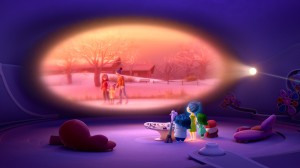 The braintrust at Pixar, this time led by Writer/Director Pete Docter, match the opening minutes of Up in terms of laying an emotional blueprint and path. Honestly, it’s just incredible. Our protagonists populate the mind of Riley (Kaitlyn Dias). She’s 11, lives in Minnesota, and the cold winters have instilled a passion for hockey. Riley is your typical young girl, bright and blue eyed, and by making her such Docter creates a character we can understand or at least recognize. And then her family moves to San Francisco for Dad’s work. Gone are school, friends, sports. It’s a bad wheel of fortune that lands on bankrupt. All the while, the insides of Riley’s mind try to process and handle the situation, creating the outward actions and emotions that the title propagates.

Up in Headquarters (literally Riley’s head), Joy (Amy Poehler) is the pilot. There isn’t much to her…because, well, she’s sheer Joy. As goes for the rest of the ragtag enterprise crew. Fear (Bill Hader) helps keep Riley safe, almost too much. Anger (Lewis Black) is the necessary reactionary of the group. Disgust (Mindy Kaling) remains composed of broader thoughts like jealously and materialism. And then there is Sadness (Phyllis Smith). She’s the outsider, the loner, the one who can’t do anything right or wrong. Sadness simply is not wanted. She literally reaches out, touching memories Joy holds so close to her happy heart, and turns them blue. There’s a scuffle over Riley’s core memories (those that most shape her personality), which results in Joy and Sadness being jettisoned off to the banks of long distance memory. They must trek through the folds and creases of Riley’s mind back to headquarters before the bad turns worse. Before Riley shuts down altogether. 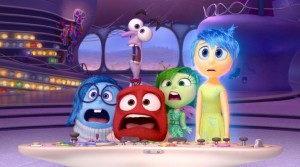 There are a lot of moments during Joy and Sadness’ journey that don’t really matter or push the story forward. But I didn’t care, because they are so wonderfully inventive and wildly creative. I’ll let you discover those parts along with them though, because the playground inspired recesses of the mind are truly extraordinary. The thought and design behind Inside Out is Academy Award worthy. Not just for animated feature either. Put this against the big boys, the melodramatic biopics and boring dramas. This is better. It’s truly mind-boggling that they were able to take the brain and its core concepts, of which still escape comprehension by even the smartest of us, and present them in a fashion understandable by kids and enticing enough for grownups. Inside Out, more than any other Pixar film, feels made for adults. Kids will both love it and not entirely get it, and while the execution doesn’t meet the level of Wall-E, it’s 10x smarter. This is the movie you’ll revisit with your kids, that they’ll share with their own, and will become as integral to understanding one another as simple conversation.

This voice cast takes an intricately thought out idea and effortlessly brings it to life. There’s not a complaint to go around. Kaling and Hader get a little lost as their characters are given the least to do. And Kyle MacLachlan and Diane Lane aren’t given much either as Riley’s parents. Still, there’s Lewis Black perfectly cast as the red-hot anger. Phyllis Smith is drowning and droll as sadness, an infuriating character who becomes transcendent because of Smith’s vulnerabilities. Then there’s Poehler. Joy can be overbearing, and I imagine she got the job based on her work on Parks and Rec. It’s the same character as Leslie Knope, which could not be more welcome. But the real emotion comes from Kaitlyn Dias as Riley and Richard Kind as her long-lost imaginary friend Bing Bong. Dias perfectly encapsulates the insecurities and confusion of growing up with her trembling and stern vibrato. Longtime character actor Kind steals the show though. Bing Bong is part elephant, cat, dolphin, and cotton candy. He cries individual tears of wrapped candy. And he wants to be with Riley. He’s dressed as a hobo, wandering the streets with no name hoping to encounter his buddy who has altogether forgotten him. Bing Bong serves as a platform to illustrate the grieving process of letting go, and the tears you cry over such a silly character will leave you dumbfounded.

From the onset, you quickly realize that this isn’t your average animated movie. Compared to the crowd, Inside Out is a polished rocking chair and the rest are rickety Ikea pieces missing the nuts and bolts. It’s not perfectly fluid, and at times feels like it could have been hours longer, but it’s perfectly told for what it wants to convey. Everyone will get this movie and its overall point, which is that sadness is necessary and joy can be selfish. We can’t just be joy, or anger, or fear, or disgust, or sadness. Our inner trappings are more complex than that. There’s a reason that these traits are all a single color, all lined up like a rainbow. Combine them carefully and you can get any color and emotion that you could possibly wish for. Inside Out is the kind of film that changes with you. That will be different upon each viewing. Its power to transform and work at every level is beyond rare. It’s singular.

You will undoubtedly connect with this film. Like the countless little balls of memories whirring about, you’ll find one of your own and cling to it. Mine happened to be caught in a photograph by my mother, what she calls her favorite photo of me. In it I was maybe 4, laying at the top of our backyard slide, hand propping my head up in adolescent thought. She captioned in the photo album, “I wish I knew what you were thinking.” The thing is, I remember. I was thinking about the way she vacuumed the carpet that day, running over the cord, interrupting my TV. Some of the most arbitrary memories stay clear while the most important fade. And as I exited the theater, I was left with one which will never escape me. A little girl, clutching a stuffed monkey in one hand and her father’s palm in the other, gave a better and more precise critical assessment than every word I’ve said thus far. “Daddy, that was sad. But it was funny too. It was happy. Things can be a lot of things.” Inside Out is in fact a lot of things, and is enough of each one of them to make you laugh, to make you cry, and to make you think. Joy says the following quote, and I couldn’t express my feelings toward the movie any better.

“I think it’s all beautiful.”