If you read just a single line of this review, make it the following; Aloha is bound to be one of the worst movies of 2015. I’m sure most people have heard the old phrase that one cannot hate that which one does not know. Going off of that, no, I did not hate Aloha. It deserves that malice, but the film is so incoherent, so ignorant of its own message and themes that we never know enough to draw a conclusion in the first place. Plain and simple, the story makes absolutely zero sense. This “rom-com” has two terribly unromantic and lifeless relationships, and the com portion of the title might as well be short for completelynolaughs. Aloha isn’t charming and it’s not funny. What an unintelligible, shambolic, incomprehensible mess of a movie. But hey, at least the cast and the scenery look pretty!

For reasons I will never understand, Sony made the first 8 minutes of the movie available on YouTube prior to its release. And that’s about as much of it as you need to watch. We’re introd by Brian Gilchrest (Bradley Cooper). He’s a military contractor, but for all I know, and all we’re told, he could be a Wal-Mart door greeter. Gilchrest walks with a limp after being bombed overseas, negotiates with a billionaire (Bill Murray, who’s hardly in the film) to launch a satellite, and also knows how to decrypt coder hacks better than Alan Turing. He lands back in Hawaii to do some kind of grounds ceremony with the only actual Hawaiian locals shown on the screen. They’re conveniently tucked away into the mountains. Like I said, the plot, or lack thereof, is the equivalent of baby babble. 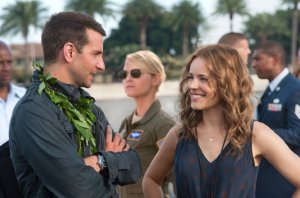 Gilchrest hasn’t talked to his ex Tracy (Rachel McAdams) in more than a decade, and she plays house in Hawaii with her pilot husband Woody (John Krasinski). Emma Stone is Allison Ng. She does…something (god, at this point I don’t even care about trying to remember). She’s by the books and in uniform, tailing Brian most of the movie and for some reason obsessed with spirits and apparitions. Don’t worry about her name either; they explain it multiple times. It’s okay because they made the palest actress in Hollywood look like a sun-kissed Florida Keys resident to play a 1/4 Asian, 1/4 Hawaiian, 1/4 Swedish, and another 1/4 that goes undetailed but I’m assuming is Bullshit. That’s as much as I think I can handle talking about this contrived, messy, POS story that the no longer legendary Cameron Crowe has vomited onto screens nationwide. Thankfully it’s only the beginning of the summer season. The theater cleaning crews have plenty of time to disinfect the upchuck. 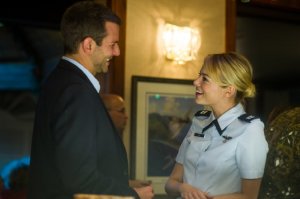 For all of its many problems, the acting in Aloha really isn’t that bad. McAdams is emotional and seductive. Stone is stern and a bit repellent, casting constant over the shoulder glances at Brian. Krasinski might as well not be credited for the film, as his taciturn character never speaks. And Cooper plays a closeted character with no background, shape, or sense of arc. They’re all ground zero rescue victims scraping by with what they have. And their calls for help are never answered. With this film Crowe has written what is easily one of the most illogical, scatter-brained, unintelligent movies I have seen in years. This is by far his worst effort not only as a screenwriter, but also as a director. Camera angles are grafted upon one another with the skill of a surgeon after a drinking bender. It feels long yet is edited down to the point that everything is included and none of it makes sense. And finally, there is no trace of direction. Crowe did not do his job.

In any profession/hobby/service, the greatest people, the best at their craft, are those willing to adapt. They recognize their own success and the changes goosestepping towards them, and decide to address them head on to become better. That’s not Crowe. He was great, but the man has refused to change. Vanilla Sky is enticing, but never as accessible as its inspiration Abre Los Ojos. Elizabethtown is purely twee sentiment. And We Bought a Zoo…alright, I actually love that one, imperfections and all. Still, Crowe bases himself in a nostalgic reminiscence of love lost and the pursuit of happiness. But this guy wrote and directed Say Anything. That’s one of the best high school movies ever made. It was real, raw, and vulnerable. Aloha takes the title of Crowe’s breakthrough masterwork to heart. It says anything and everything, and in the process ends up being about nothing. The quote below sums up my feelings about this. Yes, that line is actually in the movie.