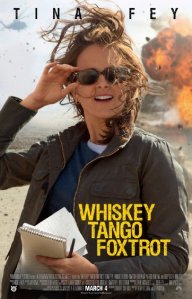 Whiskey Tango Foxtrot is a lot of things. First: the disfigured offspring of last year’s dreadfully apolitical Our Brand Is Crisis and the bleached dramedy Aloha. Second: a surprisingly offensive film that tries to cover-up its flippant misogyny for women’s rights by practically wearing a Hijab with “feminist” bedazzled across its fabric. And lastly: one long and cumbersome excuse of a bathroom break. Take your time when you make those trips to the toilet or the lobby too. Hell, treat them as intermissions, because you won’t miss a damn thing. Whiskey Tango Foxtrot leads my early list for worst movie of 2016. 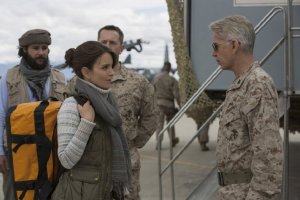 Without reason or setup or any sense of the lady’s personality, Kim Baker (Tina Fey) heads off to Afghanistan to be a war correspondent. The relationship with her serious boyfriend back in the States deteriorates. Her alcohol intake skyrockets. And a fling with freelance photographer Iain MacKelpie (Martin Freeman) reluctantly sparks. She interviews Marines, gets into the middle of the action, makes the faraway land her temporary home. And then. And then. And then. One mistake after another. Robert Carlock’s adaptation of Kim Barker’s memoir has no segues or story beats, making me guess that they dropped the R in Barker in order to stifle her voice, opting for the more comfortable Suzy Homemaker surname Baker. 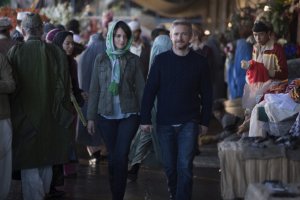 The film’s cast is somewhat baffling. Margot Robbie plays a fellow journalist while Billy Bob Thornton is a General. Plus some of the only decent performances come from Christopher Abbot as local fixer/guide and Alfred Molina as an official. But why not put real actors of Middle Eastern heritage in these roles? Probably because Whiskey Tango Foxtrot doesn’t care about political correctness or consistency. Somewhere along the way the film was lost either in the editing room or behind directors Glenn Ficarra and John Requa’s cameras. It’s amorphous, tonally challenged, dreadfully executed. Covering the war on terror through a humorist point of view has rarely ever felt so emotionally or dramatically AWOL. 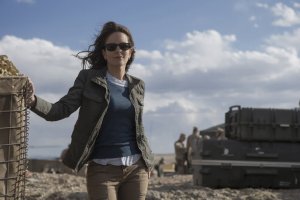 In the midst of all this mess is Tina Fey doing her best SNL Weekend Update impersonation. Here though, she doesn’t have a counterpart to help deflect all of the shoddy jokes and unfulfilled character arcs. Fey actually isn’t bad in the role either, but yet again we see her talent fall victim to substandard material. I still think she can lead a film; she just hasn’t had the opportunity to lead a good one. With enough vagina inspired wisecracks and a slew of lecherous lads lurking in every woman’s wake, this war comedy puts a farcical face on femininity and reduces personal complexities to impulsive flirtations with disaster and turmoil. Whiskey Tango Foxtrot’s title might sound like fun. At least until the bar’s closing time comes and you find it face down in the toilet, dumb and drunk and defeated all at once.

“That sucks. That sucks for women.”