Slow West is a nearly impossible film to define, to pin down what it is and what it isn’t. The sheer number of outside influences overwhelm the senses. It has the irony of a late Spaghetti Western, the sympathy and strength of the Revisionist Western Era, and an abundance of pathos to evoke pity and sadness. Slow West is, for the lack of a more descriptive adjective, utterly heartbreaking. The journey itself is allegorical – whether that was the intended purpose or not – and represents the search for life through love. It stirs empathy by making us feel equally beaten, battered, bruised. And it’s so close to perfection, so masterfully told, that I pressed play again the second it ended. Slow West is one of the year’s strongest films.

Making the trip from Scotland to the West in search of his adolescent love, his girl, the young aristocratic Jay Cavendish (Kodi Smit-McPhee) travels alone. It’s him against the elements, the outlaws, the natives. Miraculously, he goes unnoticed and unharmed, until a group of former law men find him, chasing down “savages” to kill for sport. Enter Silas Selleck (Michael Fassbender), the typical drifting outlaw archetype of the genre. Silas, with hidden motives that are expertly and meticulously fleshed out, becomes Jay’s chaperon on their trip. “Ho for the West,” Jay says, with a youthful innocence found to be both jejune and optimistic by Silas. Slow West draws its emotional pistols at just the right moments, creating a spray of intimacy that you can’t dodge. The man and the child form a bond and a symbiosis to be challenged by the Great Western Frontier. 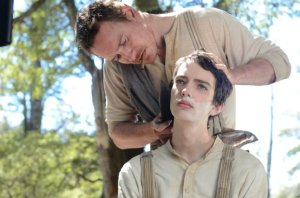 The film is so staggeringly memorable because it is so episodic. That’s tough to do, especially with film, since that approach requires pitch perfect segues. It is Tarantinoesque in its hyper-realized and absurdly violent noir style, but also as ethereal and dreamy as a Michel Gondry film. Written and directed by newcomer John Maclean, a former musician, Slow West is one of the best filmmaking debuts I have ever seen. It’s undeniable how much his past art form influenced the piece too, similar to 2009’s haunting A Single Man from designer Tom Ford. Maclean imbues into the film a clear 1-2-3 time signature of the waltz, which serves as inspiration to the unforgettable and tremendous score as well, and the result is an 84 minute movie that does two quick steps, hits us, and then repeats the process. Each time the stakes are raised and the drama intensified.

As a former student of screenwriting, I can tell you that the script is sickeningly good. It’s direct, concise, highly descriptive, and full of some of the most memorable dialogue I have heard in recent years. A scornful murderer saying, “we’re all sons a bitches,” and Silas describing Jay as, “a jackrabbit in a den of wolves” are two standouts. Even more striking are the visual metaphors and symbology. There’s the bounty hunter Payne (Ben Mendelsohn), previously the employer of Silas, traveling with his henchmen. It’s no mistake that his group number is 7, a clear nod to Akira Kurosawa’s Seven Samurai and its American remake The Magnificent Seven. But we also get more, like multiple scenes adding to Jay’s loss of innocence, ultimately culminating in having an arrow shot through his hand by a native. No matter how hard you try in the West, everyone gets their hands dirty.

The script doesn’t work unless it has the right actors to bring it to life. Smit-McPhee, paired with his work last year in Young Ones, has now made me a believer. The kid pulls off vulnerability and feigned ferocity with ease. We also get Ben Mendelsohn, an actor who consistently plays the same character with a new spin and new take, making them so compelling and disturbing and distracting that you forget everything he’s done before and hone in on the current moment. As Rose, a character appropriately as beautiful and thorny as her name insinuates, Caren Pistorious paves a name for her obvious talent. She’s coy as a cat (literally in one scene, placing her feline friend in front of Jay’s face), seductive, and unforgivably concentrated. She’s a valued and tenacious young woman, never submitting to the royalty of Jay, choosing to move her pawns than ever sacrifice her romantic king. Rose is attractive, but lest ye be weary, her indifference will make you bleed. She feels the most real of the bunch. 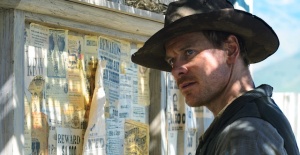 Fassbender, as usual, steals the show. He’s indifferent and inclusive, collected and curious. Silas is not a good man, yet, through Jay’s travels, we learn how little that means on the Great Plains. How the conditions don’t determine who we are or are not, but even more illuminate our real inner lights. Silas, without question, is the character we are meant to experience. To understand and to confide in. After a shootout at a provisions shop, leaving the victims’ little children behind to die, he rides off, quietly crying, whistling Yankee Doodle. And in another, during a discussion about Jay with Rose he says, “He loved you with all his heart.” Her reply? “His heart was in the wrong place.” Slow West is a depiction of infatuated and silly youth during a distinct time period. It is the consequential Western with a heightened acknowledgment of disparate race relations and its choking sense of fatalism. Still, in despite that, it is unambiguous, because by the end, when the lump starts to form in your throat, you feel a wary sense of suspicion. Which makes sense, because in the West nothing came without haste. Things can always go wrong, or can always go right, and Slow West’s greatest accomplishment is that, unlike most stories, it realistically shows them with equal weight.

“In a short time, this will be a long time ago.”