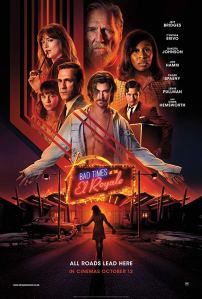 “Which side are you on?”

Some movies are short but linger like zombies who just won’t quit. Others feel long because the road they travel is far too ambitious and lacking quality scenery. Bad Times at the El Royale, clocking in at nearly two and a half hours in length, doesn’t fall in either category. Despite its extensive run-time, the film never wastes a single second over the course of this massive murder mystery, opting to utilize increasingly escalating stakes rather than relying on unwarranted twists or turns. Bad Times at the El Royale is the kind of original movie we don’t get all that often anymore; it’s unique, surprising, and has been constructed with an all-seeing eye for detail. The less you know going in, the better experience you’ll have. I can’t recommend this play date with a penchant for the macabre quite enough. 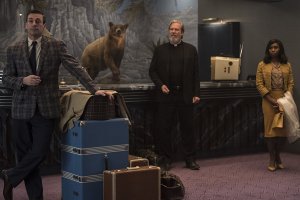 It’s 1969 and the previously prestigious El Royale hotel has fallen under hard times. Once a profitable den of depraved debauchery, the place has become a ghost town. With empty rooms and a lifeless lobby, the sprawling building is so vacant that they couldn’t turn Mary away to a manger, that is until the doors unexpectedly open and the front desk bell is rung. There’s vacuum salesman Laramie Seymour Sullivan (Jon Hamm), soul-singer Darlene Sweet (Cynthia Erivo) and the priest Father Flynn (Jeff Bridges). Their arrival surprises Miles Miller (Lewis Pullman), the one man employee maintaining the confines, and the sense of unease gradually rolls in like a thick fog settling in to cloud this one night affair. Safe to say things won’t end with a continental breakfast in the morning. 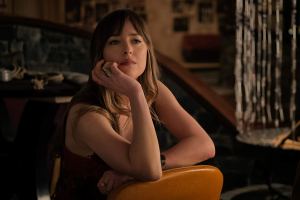 The last main guest to the party is Emily Summerspring (Dakota Johnson), stowing away as many secrets and lies as the rest of the lodgers. And this is where I should probably stop in terms of plot description. Bad Times at the El Royale scrupulously draws a palisade of a purgatory for these fibbers to dance back and forth – with the help of careful choreography – between the realms of Heaven and Hell. The building literally sits on the border between California and Nevada, using its line of demarcation to visually enhance the dichotomy between good and bad, although it’s always a bit blurred as well. At the center of it all is a jukebox, an ornament featuring selections that skate around different time periods and genres, serving as the beating heart in this unforgettable neo-noir (the opening’s masterful transition from The Four Preps’ “26 Miles” to Edwin Starr’s “25 Miles” just takes us one step closer into the thick of the mystery). Bad Times at the El Royale watches its characters with a voyeuristic, god-like eye, and it creates a space for these people to be tempted by the most deadly of sins. It’s a thematically religious film, although it’s not one any church would endorse, entirely because it shows the occasional harmful effects of blind belief. 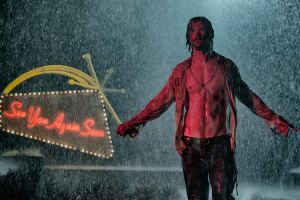 Drew Goddard’s Bad Times at the El Royale features a cast of A-listers who willingly serve as pieces in a collective ensemble. Everyone in-house is superb, especially the scene-stealing voice of Erivo, and yet no presence hits harder than Chris Hemsworth’s cult leader Billy Lee. He’s charismatic, terrifying, and showcases a washboard torso that slithers back and forth like the serpent in the Garden of Eden. As in the Bible, when Billy Lee’s temptation enters the story the landscape is forever changed. And I think that’s all I can really say about that. Bad Times at the El Royale could not be more of an American film if it tried, force-feeding us like a fatted calf, walking us out to a celebratory slaughter lit by the bright hum of a neon light and and the shade of half truths. It fills us with bipartisan politics, the possibility for redemption through penance, and it is one of the most intricate films I’ve seen in 2018. Consider this a cinematic TripAdvisor recommendation of sorts. You’re likely to enjoy your stay at the El Royale; you might even want to revisit it sooner than you’d think.