“We need to fail down here so we don’t fail up there.”

You don’t fall in love with a picture like First Man. It’s a cold, hostile, largely introspective endeavor, the type of film with a steady pulse and a dogged sense of persistence. Instead, you’re left in awe of the movie’s commitment to doing things the way that they are meant to be done. By unearthing every kernel of information, leaving no stone left unturned, and by carefully constructing a biographical epic about one of the biggest milestones in mankind’s history. That’s the American way – or, as I now believe, was the way until complacency set in – and in that regard First Man is a breathtaking, almost haunting depiction of deadly determination and an America that is no more. Try to see this one in IMAX if possible; the sound and scope are truly astonishing. 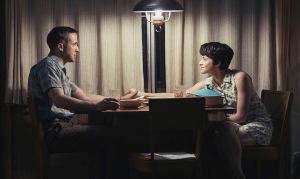 Like any stoic, so much of what we learn about Neil Armstrong (Ryan Gosling) is shown to us through his actions rather than told to us through his words. He’s a tight-lipped man, a careful listener who speaks with an exacting precision. He says what he means. Neil starts out as a civilian test pilot, using his meticulous, constantly calculating background in engineering to solve problems while quite literally on the fly. And as the United States’ Space Race with the USSR continued heating up, Neil was selected to become a NASA astronaut. “It’ll be a new adventure,” he’s told by wife Janet (Claire Foy), the two of them still reeling from the untimely death of their young daughter to pneumonia, the side-effect of a malignant tumor. Neil eventually escapes into his work. Janet’s stuck raising two boys and playing homemaker. A marital rift boils between them like an abscess growth.

First Man may be an overly serious and stern film, but that doesn’t mean it completely lacks for personality. There are brief, important moments that are funny and charming and allow us (and the characters) to just take a deep breath. All the while, even as the rare comedic bits land with authority, there remains the possibility of dread just lurking around the next corner, using the gut punches of life to frighten us more than most horror movies can with a number of jump scares. The film spends a great deal of time untangling and introducing the details we’ve either confused or never heard before, gearing up for the Gemini project and eventually pushing forward towards the famous Apollo mission.

Like Neil, the picture struggles to process its grief and to really share emotion. It’s simply the byproduct of the man at its epicenter. That’s why the rest of the supporting cast (Jason Clarke, Corey Stoll, and Patrick Fugit are especially good here) is so integral to the picture. Similar to man’s collective pursuit of taking a step on the moon, the real-life story and the script both heavily depend on the unique function of each aspect. The aircraft won’t soar into space if a piece is missing, and likewise the movie – featuring one of the most dynamic casts of the year – relies on each person to play the part they’ve been given. You might assume that First Man seeks to expand upon one of the greatest stories never told – and it handles this side with intelligence – but more than anything this is a film about sacrifice, and is a reminder to squeeze your loved ones and to honor yourself before exploring the ceaseless dark space surrounding our tiny space in the solar system.

The intensity and the inward-looking nature of the film are on full display through the checked emotions in Gosling’s portrayal of Armstrong. He’s statuesque, almost stately in his lack of expression, allowing his eyes to tell the story that his voice forbids him from sharing. And to that account, the technical aspects of the picture move to the tune of his quiet and subdued melody. Tom Cross’ careful editing exhilarates the space sequences and fine tunes Gosling’s performance. Justin Hurwitz’s score channels his work on La La Land and imbues the music with heavier strings, more ethereal tones, and appropriately heavy sounds when the time calls for it (one track, played against a crucial attachment sequence, is as romantic and fanciful as the galactic space dance in Wall-E). First Man will most certainly rack up plenty of well-deserved awards nominations in the technical categories (the sound design is outstanding), but the direction of Damien Chazelle and his collaboration with cinematographer Linus Sandgren are what really turns the movie into its own entity. With static shots, frenzied shaky cam, long smooth takes and a first-person perspective of the astronauts during the missions, Chazelle doesn’t just tell us that the journey was harrowing, but instead allows us to experience it for ourselves. However distant the film might feel, it’s been crafted with sincerity and empathy.

Josh Singer’s script, inspired by James R. Hansen’s official biography on Armstrong, never lacks for authenticity. It shows the public’s negative and positive reaction to the space program. Gender discrepancies are treated with a subtle touch. And most importantly, it’s patriotic without resorting to flag-waving, jingoistic behavior. It all adds up to a movie that’s somehow both one of the most expansively epic yet claustrophobic films I’ve ever seen, with First Man being immersive in the ways that very few movies are. Throughout the picture, we see multiple shots of objects in space, not because the camera is pointed directly at them, but because we see the images reflect against the faces of people; ambitions and goals remain within reach so long as we can see them. For all of Chazelle’s flair and his mastery of the craft at such a young age, he’s still able to take a story as infinitely challenging as this one and to flip it on end, emphasizing a sense of humble humanism. Channeling and paying respect to 1983’s The Right Stuff, Chazelle’s vision of First Man serves as a template and a reminder of what we’re able to accomplish when we band together.

“It gives me faith.”