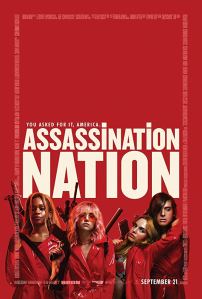 A sociological, invasive thriller verging on the edges of madness, Assassination Nation is both brilliant and blunt, obtuse and acute, and a paradox of its own satirical creation. The film is meant to make us laugh with its frequent light jabs to our jaw and to endure its many strong right crosses to our temple. To point fingers and to admit blame. To join the faceless in the stadium who cheer and jeer as those tossed into the ring are forced to face demons both random and of their own doing. Assassination Nation is the 21st century’s version of a gladiator battle to the death, sparked and stoked through the faceless interactions floating around the internet and in the airwaves. This movie attempts to do too much, but I can’t say that it doesn’t do enough either.

Set in a contemporary Salem, Massachusetts, the film follows a quartet of close friends navigating their lives while they simultaneously dismantle and circumvent them in the digital world. Lily Colson (Odessa Young) leads the pack. She’s intelligent, naive, slandered around the school as a slut. The libertine men in her life, from boyfriend Mark (Bill Skarsgård) and to the married man next door named Nick (Joel McHale), treat Lily as a sexual conquest. Sisters Em (Abra) and Sarah (Suki Waterhouse) stand by her side, as does Bex (Hari Nef), an openly transgender female (I only tell you that because it involves a crucial plot point). Then a hacker attacks the community, or perhaps just exposes their deception. First in line is Mayor Bartlett (Cullen Moss) as his secret snuff pictures are made available for all to see. His abrupt demise leads to more and more leaks. Before we know it, the entire town has become embattled, and Lily turns into the Ann Putnam figure in the leading role, accused of character assassination and hunted for the crimes of airing everyone’s dirty laundry. As the film posits, we’re mostly a nation of hypocrites.

Assassination Nation, with its indignant opening warning of us what’s to ensue, comes across like a story that’s more or less been written by an imprudent author with no sense of restraint, with the movie delivery the same feeling. That’s more of an observation than it’s meant to be a critique. And I think this creative decision by writer/director Sam Levinson permeates a purgative sensibility, vomiting all of its frustrations onto the screen because the movie is so overstuffed with fair criticisms of the modern world. It’s the kind of film you can feel, taste, smell. One that attaches its main theme of female empowerment to all of our most basic senses, not because they’re most easily interpreted that way, but because those spaces allow the sentiments to own a place in the memory that festers. However temporary this film might come across, it sure manages to brand us with its searing hot message.

There’s just so much to unpack in Assassination Nation that at times it may as well be a bagged school lunch, messily packed but abundant in its offerings. The film delivers its hyper-critical message with aplomb, allowing Levinson’s outstanding debut to gracefully dance around its topics like an ice-skating routine that’s been set aflame. I’ve read some people calling the film inconsistent, arguing that the picture condemns the male gaze while still using it as the main perspective. And that’s been done on purpose. By doing so, Levinson challenges us to see this movie as art rather than as a piece of pornographic violence. To look past its overt sexual nature and to understand what it’s trying to say. It is time for men to shut up and listen, and with the help of Ian Hultquist’s alarming, arousing film score, Assassination Nation uses its heavily stylized interpretation of a modern-day exegesis to offer up a seething, white-knuckled commentary of the now. If the film feels assaulting, it might be because that’s the main objective.

“The truth is, no one wants the real you.”