Addiction is a beast that constantly lurches around the corners of the mind, purposefully short-circuiting the mainframe and malfunctioning unless it gets its way, similar to a terrible two toddler throwing a tantrum. It can hibernate like a bear or it can be the trap ready to snap right outside the den, and this duplicity and malleability is what makes the disease so devastating. In Colossal, that virus is alcoholism, and the more our lead character consumes the more the hosts of disaster and drama are allowed to come out to play and to prey. Few films in recent memory have so capably captured the overbearing helplessness experienced during a good, solid nightmare. What makes Colossal so special is that it evokes these feelings right after the morning alarm rings, and somehow rips the monsters from our REM cycle and brings them into the real world. It pleads and it begs us to face our demons. We willingly oblige.

We never entirely know Gloria (Anne Hathaway), and that’s on purpose. She seems to be, for the most part, an alcoholic who’s been out of work for more than a year, partitioning her life off into the crusty-eyed corners and rapid blinks of deprived booze. Her boyfriend Tim (Dan Stevens) can’t take it anymore, packing Gloria’s bags and sending her off to her hometown to figure things out. The Victorian family home has long since been abandoned, the pool full of leaves and muck, the rooms empty. It’s like a Chateau Marmont better suited for under the bridge drunks, filled with an air-mattress and an out-dated big-screen TV. A futon is eventually added to the decor. The opening third of Colossal is particularly untidy and all over the place, quite appropriately so, because it reflects Gloria’s current state of disarray. This is a life in shambles. 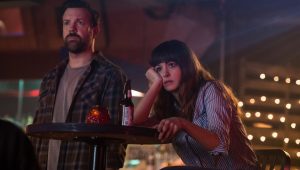 Gloria immediately runs across Oscar (Jason Sudeikis) upon her arrival in town. They were classmates in grade school, and while Oscar clearly has eyes for this woman, he never acts on the impulse. So instead they go to the family bar he now owns. Closing time ushers out the customers but doesn’t turn off the lights, with Oscar and his pals routinely drinking heavily until the early morning. Garth (Tim Blake Nelson) is a disheveled blabbermouth and Joel (Austin Stowell) plays the quiet good-looking guy. Gloria fits right in with this scaled down Cheers crowd after a few drinks. She even comes on as a server to help out Oscar. But after a long bender and a snooze on a park bench, Gloria awakens to find out that a giant monster has attacked South Korea’s capital city Seoul. At this point, you might be wondering what the film’s catch is. Well, she seems to be in control of the massive horned beast. Her self-destruction becomes visceral and tangible.

Colossal is, without question, one of the most creative films I have ever seen; there’s no genre classification for this picture. But that doesn’t imply that this literal giant metaphor of a movie can’t be fully understood either. It’s a story about addiction and coping mechanisms without the dire preaching of a classic like The Lost Weekend, and told with as much imagination as last year’s Swiss Army Man, only with more weight and more emotional pull. Anne Hathaway gives, in my opinion, an award’s worthy performance while Jason Sudeikis continues to surprise me. He’s likable, and because of his talent, able to turn on a dime and be hated. They are the two catalysts for a movie that’s been made without waste; what we see and what we miss out on is of extreme importance, and audiences really need to focus in on the details. The reward is as nourishing as a tall glass of water after a night of excess.

Writer/director Nacho Vigalondo gets nearly everything about binge drinking right yet frames it in a way that’s rarely judgmental. From drunken conversations and half-hearted commitments to waking up in the most uncomfortable of places (I once slept in a laundry basket years ago and I must say, it’s no sofa), Vigalondo’s film is a high-wire act likened to a half-time show plate spinning performance. No porcelain is dropped, nothing breaks, and the applause is deservingly effusive. Even then, Colossal proves to be so much more than your typical addiction drama. The picture dives headfirst into gender politics, the dynamics of abusive relationships, and an under-your-thumb psychological slavery. It does all of this without hesitation, sprinting and charging towards its finale like Kerri Strug’s famously hobbled Olympic vault. Needless to say, despite the bumps and bruises collected along the way, Colossal sticks one hell of a landing.

“It makes no sense to keep staring straight ahead if everything is below you.”