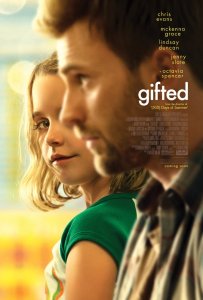 Gifted is a tiny movie about a lot of big things: finding balance in life, the rigors of parenting, differing from the crowd, trying to forge your own path. And while these are all righteous pursuits with promising setups from the start and endearing payoffs in the end, one of its platitudes transcends the picture’s predictability and plateau effect to really resonate in our hearts. I discovered said truth while watching 2013’s tender and touching Short Term 12, and I believe it to be universal. From excited extroverts to miserable misanthropes – and every person living in the middle – all any of us really longs for in life is not just be needed by those around us, but to be wanted. To know that when given a choice, we are the preferred option. I so badly wish we had more movies like Gifted. We need them, and filmgoers should want them.

In their little home near the Florida coast, maintained just a few notches above being called a ramshackle, the so-called quiet/damaged/hot bachelor Frank Adler (Chris Evans) fixes boats by day and plays dad to his 7-year-old niece Mary (McKenna Grace, a natural on the screen) in his unpaid overtime. The film plunges us into Mary’s introduction to 1st grade, although his prescient neighbor Roberta (Octavia Spencer) warns him of the possible repercussions. Frank seeks normalcy for his niece because, as the title insinuates, Mary is a prodigy (specifically in mathematics). He wants her to have friends, to play, to discover boys, and to grow up around children her own age. But that first day doesn’t go as planned. Mary stubbornly defies her teacher Bonnie (Jenny Slate), yells at her principal, and later that week shows an older bully a lesson with a textbook to the nose. She’s a pint-sized Rosie the Riveter with an Einstein brain. 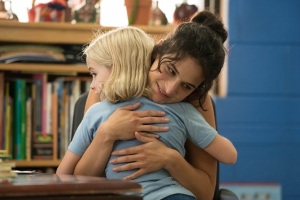 As a result, Gifted abruptly and sporadically shifts into a lite courtroom drama, with Frank battling for custody against his esteemed Mother Evelyn (Lindsay Duncan). Frank’s a smart man; he once was an associate professor of philosophy at Boston University. But following his once-in-a-billion brilliant sister’s untimely death, Frank wants to reroute his niece on a path different from that of his sibling’s self-destruction. For Grandma, Mary seems to be a mulligan, like a capably minded show pony with which Evelyn can make another attempt at motherhood. And as you’ll see in the movie, her passion for greatness overshadows her dignity and her pulse. Evelyn is the film’s most troubled and tragic and insane character, yet Duncan still manages to make her human and, at the very least, tolerable and even agreeable. The best films give us a protagonist (Frank) and an antagonist (Evelyn) with a similar goal (do what’s best for Mary). They’re different and shared, and Gifted walks this fine line with both sides showing such vulnerability, power, and an understood desire for what they each think to be best.

It’s funny that director Marc Webb should make such full use of screenwriter Tom Flynn’s mention of the Trachtenberg Method. I hadn’t heard of it until now because math has never been my strong suit, but it’s a way of coming to rapid calculations, and frequent moviegoers will recognize that Gifted is so routine we can often deduce what the equation is going to eventually equal. It’s predictable in its nature, whereas it contrasts this uniformity by nurturing us with absolutely beautiful scenes of unfenced honesty. The standout moment comes later on in the film during the court battle. Frank drags Mary and Roberta to the hospital waiting room. How long will they be there? “As long as it takes,” he says. Then they’re awoken to a new father breaking through the doors, hugging his family and announcing “It’s a boy!” Frank looks at his niece, tells her that was exactly how her own birth went, and she questions who told the sleep-deprived guests. “I did,” Frank says. It is one of the most stunning scenes I’ve come across in a long time, and while the film tends to be a bit hokey with sentiments merely grafted onto another, we constantly care about the livelihoods of everyone involved. This warm and winning film is capable of moving a cold-hearted center right where it belongs – just left of the chest – and there it beats with long-lasting love. Gifted doesn’t come wrapped with a bow, but it’s still surprisingly honest and rewarding.

“He wanted me before I was smart.”