“A shootout never has a happy ending.”

Blake Snyder’s popular book Save the Cat should be administered like a vaccine to every film student and to all movie geeks. It’s a 15 point outline that’s typically the standard plot structure necessary to produce a competent, easily understood, and overall cohesive picture. This approach is fundamental and freshman; there’s little room for much nuance or artistry or subjective impressions. But like much of the 90’s cereal box cinema, Going in Style follows Snyder’s beat sheet to an iron-pressed tee and so much sweet that it refuses to go stale. We’ve had this bowl for breakfast before – many times in fact – and still we lap it up, tightly close the bag, and return it back to the pantry until the next morning. The familiarity of this picture somehow works in its favor. 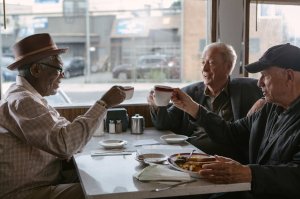 With Going in Style, the heist genre literally gets old; three friends on the 17th hole of their lives decide to go for broke and simultaneously try to break the bank after their pension packages are inhumanely revoked. Following this, Joe (Michael Caine) is faced with losing his home and witnesses a robbery during a quarrel with his financial adviser. Some people may think the next development from here is a bit too bold or too impractical, but these are men, and a man’s hamartia tends to concern the ego and a bit of self-appreciating delusion. So this old billy-goat shepherds his pals Willie (Morgan Freeman) and Albert (Alan Arkin) into thievery. They go from a gang of AAA cardholders and senior discount beneficiaries to tortoise speed bandits.

Joe wants to provide for his daughter and his granddaughter. Albert still searches for lust and Annie (Ann-Margret) placates the old-timer’s heat. Meanwhile, and secretively, Willie wishes to see his family before his kidneys go out. Going in Style is just about as uniform and janitorial in its execution as a late night custodian’s routine mop of the halls, but it makes sense, and most importantly, there are personally driven motives. To believe that these geezers actually think they can pull off such an intricate plan is the entire movie’s magic trick. We know what the result is going to be and can practically predict its sleight of hand. While it’s true that Going in Style is not unlike anything we’ve seen before, it isn’t clumsy or tedious either, and it has enough charm to pull the coin from behind our ears with innocence.

It’s probably impossible for this film to stack up against the George Burns starring original; that picture embraced old age whereas this feature seems to rebuke it in spots, even mistakenly casting shades towards geriatric inability. Zach Braff’s take on that 1979 movie never completely sets sail from its own breeziness, nor does it remain tied at port either. At the very least it’s competent, structurally balanced, and altogether completely harmless with its subject manner. Going in Style doesn’t have to lace up its shoes because the Velcro variety is such a capable substitute, and not only does it wear them comfortably, but it has the audacity to wear them on any occasion. This is not a particularly amazing film; it is an easily enjoyable one, though.

“It always works out in the end.”