It’s hard to know what the hell I watched, or to what level I enjoyed it, or how to properly summarize the experience that is Swiss Army Man. Parts feel like zany Madhatter daydreams and others delve deep into the reserves of mental health awareness. It’s a film that defies convention by not conceding to formula, let alone even admitting cinematic structure exists. The quality is admirable, if not flawed to a fault, and results in a mercurial movie that can be something to behold in splashes and falls out of mind during others. Swiss Army Man has the ambition of the Wright brothers without the ability to actually take flight. The highs soar, and the lows bring it crashing down in a fit of reckless revelry.

Stranded on a desert island, Hank (Paul Dano) decides to give up. He stands on a cooler, his neck adorned by a makeshift noose, muttering melodies and indiscernible words as he slowly creeps his way towards death. Then he sees a body washed ashore. Hank names him Manny (Daniel Radcliffe), and together they journey into a buddy comedy soaked in the surreal. Manny has the ability to talk, along with powerful flatulence and an erection that always points North. Now, I realize how bizarre that sounds, like it’s the kind of story a 10-year-old boy might write whilst saying, “farts and wieners are funny!” And oddly enough, Swiss Army Man manages to make the immaturity endearing while maintaining the amusement that comes with them. Following Hank and Manny as they venture out to find home is a delight until the film loses its way. 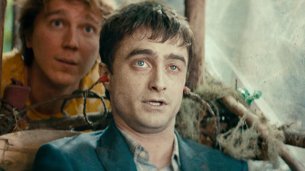 The setup is too long, the pay-off underwhelming and obscure, but for about a 30 minute stretch Swiss Army Man was the best thing I’ve seen all year. While breathing life into Hank and Manny’s friendship, directors Dan Kwan and Daniel Scheinert take us to an imagination station literally unlike anything you’ve ever seen. These are very visual storytellers, and regardless of script issues, it’s clear as day that the two have a promising future as filmmakers. Powerful images resonate with really honest, observed truths about the beauty of life’s banalities and the anonymity of loneliness. It’s as close to joy induced by eye-candy as you could ever expect, which is why it’s a shame the movie relinquishes such brazen boldness for a tonally inconsistent and procedural closure. The last shot bottles up some of the originality, but not before allowing too much of its life source to leak out.

Perhaps the greatest pleasure in viewing Swiss Army Man is watching two talented actors free themselves from typecasting to tackle distinguished, alienating characters. Dano’s power has always been his ability to embody insecurity, a fitting trait for the shy Hank. But I can’t say enough about Daniel Radcliffe here. Following the Harry Potter series, the actor seems to be comfortable doing anything and everything knowing he won’t need another paycheck for the rest of his life. It’s made his work better, and in many ways, more profound. How many people can play a carcass and deliver genuine laughs and tears? So although Swiss Army Man is not the complete package you’d hope it to be, I still found myself in a love-drunk sense of wonder, teetering between bored capitulation and cheek to cheek grins. I wish the film had congealed together as a whole more smoothly, but when it’s on fire, the sights are blistering and unmatched. The foibles leave an imprint.

“Why would you ever say no to that?”