“We all have the same strong.”

Too often we forget that the world – our rendering and no one else’s – is seen through our eyes, at our height, at our time. It’s the product of subjective social structures and environments and personality. Life is a movie that we write, we star in, and we direct however we want. What a powerful tool that is. And the late Roger Ebert once said of cinema, “for me, the movies are like a machine that generates empathy.” Good movies collect our sympathy because, from a distance, they never let us vicariously feel what they feel. Great films start our empathy engines, strapping us into the passenger seat and taking us along for the ride. There are plenty of movies to still be released this year, but I am comfortable and confident in saying that I have now seen 2015’s best picture. Room, the rare combination of perfect storytelling and affectionate execution, reminds us that perspective is not just important; it’s everything. 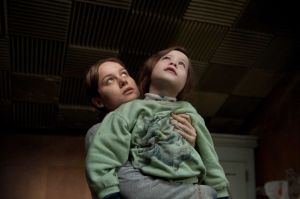 Room began as the 2010 novel written by Emma Donoghue, who was clearly aware of the potential for a screen adaptation, penning the script herself to ensure the integrity of her story. That’s when director Lenny Abrahamson wrote her a fan letter, saying what the book meant to him and promising her to do right by the film. To take care of it. Thankfully, the stars aligned, and as a result we have not only one of the most subtle and strongest adapted scripts of the year, but also one of the most creatively directed movies. Donoghue has honored her sensational book (which reads as unfilmable) while also championing the pure nature at the core of its narration. Her writing leaves holes for Abrahamson to fill, and the filmmaker suffuses the nooks and crannies with techniques both ambitiously acute and obstinately traditional. Your heart will race, your emotions be shaken, and your cheeks stained and stinging from the trailing salt of tears. Room, by some unteachable method, manages to substantiate every feeling and materialize every dream that it has.

Most would expect this story to be harrowing – which it is – but never so uplifting. Barricaded behind four walls and a door and a skylight, Ma (Brie Larson) is a prisoner. Snatched up as a teenager during an act of goodwill, unwillingly raped each night by a man only known to us as Old Nick (Sean Bridgers). Ma, whose real name is Joy Newsome, only goes by Ma because she bears her captor’s child. Jack (Jacob Tremblay) is born into a boxed in world, knowing nothing outside of his defined space. He talks to lamp, and wardrobe, and bed, and meltedy spoon who got too close to the hot oven. The room and the pieces inside it are his friends and characters just like Ma and Jack themselves, and you’ll understand that once you see the movie. I sit here now, in my own box, trying to imagine the implications and the extent of knowing nothing beyond what is immediately near me. To forget the burn of the Summer, the coolness of Fall, and the smell of a morning Spring rain. 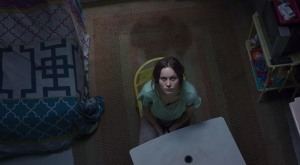 Room is an escape story as much as it is one of being lost and then found. Like reaching to the back of your closet and finding that old shirt you loved so much, now with stretched out shoulders from time on the hanger. It’s still there, just different. Lenny Abrahamson is a technical master of the POV shot – lending itself well to this story – and never is it clearer than Ma and Jack’s daring plot for freedom. Expertly edited by Nathan Nugent, Room puts us into the story, discovering a whole new world through the eyes of Jack and succumbing to the lonely abandon of Ma. Intuition tells us that the world outside the walls is different, and in ways harder, but also that we must cope with trauma and hardships through the compassionate chain link that makes us all tick. A loss of humanity can drive some to do unspeakable acts like Old Nick, as well as the opposite, struggling and prevailing to extend the warranty of the great human endeavor.

By now you should know Brie Larson from Short Term 12, one of the best films in recent years, and here I believe she will deservedly win awards glory for her performance as Ma. Room allows for quiet moments as well as loud ones, giving Larson a picture to paint with her adeptly diverse and honed in palette. Ma can only be as good as her counterpart though, and Jacob Tremblay, an astoundingly mature actor carrying an incredible load, matches her beat for beat. The cast is rounded out by the likes of Joan Allen, Tom McCamus, and William H. Macy. Room’s powerful and evocative message unfolds as Ma and Jack go out into the world. She feels dirty and shamed and ruined. He’s naive and inquisitive and withdrawn. They are reborn, together, hands interlocked and hearts adjacent, venturing out into the great unknown that is life. Should you be blessed to have a relationship with your parent, or a child, or somebody or something that makes you indefinitely you, Room will confide the endless possibility and wonder of the human spirit.

Joyous, delicate, graceful, transfixing. These words help describe Room, but like any worthwhile relationship, there is something coursing through its veins that almost goes indescribable. And that is, I believe, the life altering faculty of requited love. This picture doesn’t tease us along in hopes of forming a bond. It forcibly grabs us by the wrist, capturing our souls, however you define them, and leading us to a new place from a new perspective in a new frame of mind. So bring your tissues because you will cry. And cry plenty, weeping tears from different emotional springs. You’ll be happy, and laugh, and be devastated, and ultimately changed. Empathy comes to us when we get on our tippy toes to see those on top and when we stoop down low to see those on the bottom. The movie challenges you to shift your perspective, and by doing so ruins and assembles a new way of seeing the world for us. Its encompassing and profound statement is more than just life affirming; it is impossibly hopeful and uncommonly revelatory. Room, one of the best films I have ever seen, accomplishes what almost no others do. And that is clear-cut, crystalline, resounding pitches of perfection. I still can’t get it out of my mind.

“There’s so much of place in the world.”