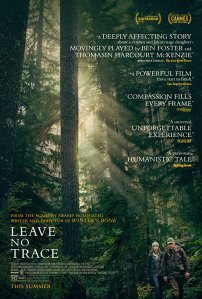 “They don’t think I was where I was supposed to be.”

Leave No Trace is both an unwitting and a stategic game of hide-and-seek between those of us in the audience and the story’s secretive, unfleshed, deeply buried secrets and messages. We’re the one’s in pursuit, chasing after the Marco beacon as it bellows to our Polo, and I don’t think the film ever allows us to catch up and say, “you’re it.” To look us directly in the eyes and to become a victim of vulnerability. Maybe that’s an intentional by-product of characters who voluntarily live in isolation, or maybe it’s what’s to be expected of a picture which visually drenched itself in more color than it ever emotes. Quiet drama pairs well with evocative performances driven by empathetic eyes, and while Leave No Trace has intense conversations, I found that its sockets spun with anxiety and unrest.

At a fundamental level, and at a psychological one, the adaptation of Leave No Trace combines major aspects from two of the decade’s best page-to-picture films. In 2009, John Hillcoat directed Cormac McCarthy’s novel The Road, turning its absolute written genius into a post-apocalyptic pilgrimage colored by grey falling ash and a concrete parental love. Then in 2015, Lenny Abrahamson crafted a revolutionary picture with Room, one where lies were only told so they’d impart less pain than the truth, and it manufactured an environment where unsaid rules and regulations were taught to us through the process of watchful repetition. Leave No Trace absolutely marvels in its opening act, and it forces us to jump to conclusions. Thankfully it’s so compassionate and slow that we never race too far ahead, and instead we hold our horses in hopes of hearing some answers. I just wish that the eavesdropping was more substantial.

Regimented and stern, veteran Will (Ben Foster) struggles with his war-torn past and the scary prospect of a future overwhelmed by the triggered powers of PTSD. He’s more comfortable adrift in the woods than he is saying land ho. In the wild he’s a homesteader, undocumented with no superiors to stand beneath, relying on the bountiful NW lands. His daughter Tom (Thomasin McKenzie) doesn’t know much better or much different. Together they hunt, they fish, take shelter under makeshift shacks from the stormy cell systems, only venturing into the disgust of civility so Will can steal some prescription drugs and doll them out to other combat vets for a levied price. Leave No Trace too aggressively sticks to its title in these scenes, diminishing key points of character development into moments of futile transgression. They’re powerful because the compatible performances from the evergreen Foster and the newcomer McKenzie are so outstanding, but they’re too nondescript as well.

Maximizing diegetic sounds to optimal effect and shooting everything through an intimate, if not voyeuristic camera lens – from the cautious discoveries to the intrusive anxiety propelled by the swirling blades of the helicopter oft heard above – Leave No Trace has a didactic approach to its method. Debra Granik’s film was too subdued and too hardened for me to really care about the well-being of the people it exploits for dramatic purposes, but it also packs a very strong performance from Thomasin McKenzie in her debut role alongside some of the strongest work the unheralded Foster has ever put to film. Leave No Trace showers its run-time with bits of greatness, and while the father-daughter journey is one with serious emotional heft, I never felt like I belonged in this world, let alone welcome to watch it unfold from the outside. It’s a thought-provoking, powerful film because it refuses sensationalism, and it’s also held back by its refusal to speak.