The thing about Brooklyn that lingers with you most is its honesty. A story with simple sensibilities, straightforwardly told, classically made. It may be a fictitious picture, but you are always aware and alert of its immigrant inspirations. We all know people who have come to this country in search of the American Dream, and unfortunately we often know too few details of the journey. For that, we have this nearly flawless film, sending us back in time to the bustling boroughs of 1952 New York. The gaps we have in our own memories and stories become filled and shaped by the richly authentic feel of this movie. And what an experience it is. Brooklyn breaks your heart, molds your mind, and wholeheartedly believes in the inevitability of fate, as well as the tandem importance of creating your own destiny. 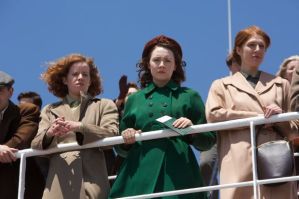 Admittedly, Brooklyn is a more immersive experience if you have read the novel by Colm Tóibín. His book feels more like a shorthanded tome than the emotional drama nestled in its pages, filled with keenly studied information. Because of that, things had to be stripped, and screenwriter Nick Hornby pieced together only the essentials vital to the picture. Characters are cut, some great scenes most likely removed due to budget constraints, but Hornby knows the heart and the propulsive power of this voyage towards redefining home, which is one of the most centrally key characteristics through which we come to determine our own sense of self. Director John Crowley holds this closely, and by film’s end you don’t feel like you’re in a theater watching a movie being projected onto a screen. Brooklyn makes you care, transporting you to a time and place with remarkable precision. Not many films garner our impassioned investments as easily as this does. 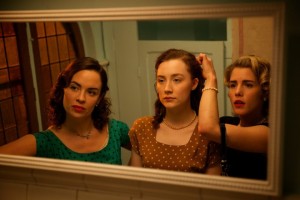 Eilis Lacey (Saoirse Ronan) travels to New York by sea, unable to find a good bookkeeping job in her home of Enniscorthy. Brooklyn almost comes across as a spin on the classic It’s a Wonderful Life, this time partaking in the adventures of Harry Bailey rather than George. Eilis’ departure is a difficult one, and I make that comparison because left behind is her mother and sister Rose (Fiona Glascott). Rose is responsible for sending her sibling to make a new life, shoehorning herself into never getting to leave the Irish countryside. Brooklyn adamantly acknowledges the difficulty of choice while simultaneously revealing to us the crucial significance behind caring for yourself first and foremost, paving roads and clearing blockades on the way to carving a niche into the world to call our own. You must first care enough about yourself and your home before you can appropriately share it with others. In that respect, Brooklyn doesn’t hit a false note. 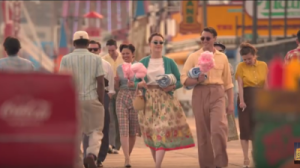 The only problem with the film can be found in the opening, ignoring to establish Eilis’ (pronounced Ay-Lish) attachment to her home and justifying her initial homesickness. However, the missing emotional beats are filled by Saorise (Sear-Sha) Ronan’s impeccable performance. We know how much she misses Ireland and her family and friends because of Ronan’s blend of stoic and raw intimacy. What starts as a shy and timid character becomes a confident and commanding young woman. Ronan, like the film, is always tangibly real, traversing a tale told here as fiction but most likely actually lived incalculable times over. The city gives her confidence, as does a romance with an Italian fella named Tony (Emory Cohen). They meet at a dance, go to Coney Island, stake claims in one another’s lives. Cohen could not be better, exuding the charm of James Dean with the swagger of Brando, looking at Eilis and us with voracious eyes, plucky cheeks, and boyish charisma. Brooklyn courts us like a proper love story should, and along the way we are swept up in the arms of endearment. You’d be hard pressed to find a better romantic drama this year or any other.

Brooklyn can be uncomfortably funny with some prudish dinner table scenes full of causal prejudice and some disparaging beats at the boarding house. And it can be heart wrenching at others. But the strength of this phenomenal film is its capability to confide in its audience. Eilis really loves Tony, and after temporarily returning home, also loves the idea of making others happy. Her gentle soul is not in between a rock and a hard place. Instead, true to her Irish manner, she rests betwixt and between, forced with a truly life-altering choice. Brooklyn’s bravery is shown through its willingness to acknowledge that some choices are irrevocable; that we must take the time to decide what is best for ourselves. John Crowley hints at this all along, ending with a final scene that is not only heartfelt, but rightfully deserved. Anymore, far too many movies take the easy way out. This film doesn’t, resulting in an old-fashioned piece of filmmaking, presented in a timeless manner that can be applied to the current refugee crisis. Typically, the best thing to do is embrace others with open arms, and a smile, and a little bit of insight. Brooklyn nails all three. 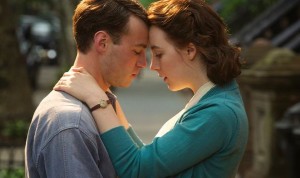 I once spotted a trunk in my parents’ attic. The color now faded to mustard yellow, worn down, its best days in the rear view. It belonged to my Grandmother. She made a similar trek during the same year, and as I watched this movie I could not help but see her on the screen. From the isles of England to the corn belt of the Midwest, clutching her trunk as she took her first steps into America, scared and anxious and determined. These are adjectives I can only assume she’d have scoffed at with a grin and a swig of Yorkshire Tea, ever the tireless debater. Brooklyn serves as a catalyst for myself, and for others, to answer the questions that they never got to ask. Here’s a movie and a story heavily steeped in nostalgia without all of the bitterness. It’s sweet, and calm, and relentlessly wrestles kindness out of you. Submit to this age old narrative, so ripe and vibrantly new that it reminds you to appreciate the passage of time, and celebrates how much of a present that the present actually is. Brooklyn is the kind of movie that makes you fall in love with cinema. And, unsurprisingly, fall in love with the idea and the action of falling in love.