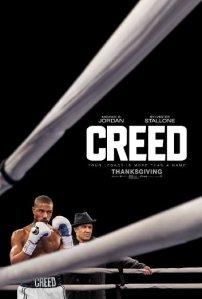 “I’m afraid of taking on the name and losing.”

There is little doubt in my mind that people will flock to theaters thinking that they’re going to watch a new Rocky movie. Hell, an old man two rows behind me even leaned over to his spouse during the previews and said, “what are we seeing again?” Rocky Balboa is synonymous with boxing, often more associated with the sport itself than some of the legends who actually entered the ring. And the reason for that is, from that first little Best Picture, we have always cared about the man more than the result of the fight. Sure, that hasn’t always been the case with the franchise, but with Creed director Ryan Coogler has managed to take us back to that 1976 film, honoring the legacy while unabashedly creating its own identity. Boxing movies have always been about the battle with personal demons rather than the actual sparring in the ring, and Creed’s success can be found in its unflappable integrity. This may just be the surprise film of the year.

In 1998 L.A., young Adonis Johnson bounces around from foster homes to youth centers, scrapping his way through thick and thin. He just can’t help but fight, and as suggested by the film, maybe the urge to throw a punch and take a hit simply runs in the family. You see, he is the illegitimate son of Apollo Creed, who from past films we know was considered the world’s greatest boxer before being killed in the ring. Now a man, Adonis (Michael B. Jordan) works for a financial group while brawling across the border in Tijuana on the weekends. He lives with Apollo’s wife Mary Anne (Phylicia Rashad), openly opposed to him following in his father’s footsteps. But boxing is the bruising family business, and Creed’s ardent scrutiny of such a life path becomes blurred by Adonis’ relentless perseverance. We don’t know his motivation to start either. Then the movie ends, the reveal is made, and Adonis becomes the self-made man he set out to shape in his own right. Creed shows incredible patience, almost too much with a number of scenes that sorely needed trimmed, but nothing ever feels redundant. This is a climb with a view from the mountaintop that proves to be rewarding.

Regardless of how hard he tries on his own, Adonis needs help. Being rejected from a club in Los Angeles leads him to the streets of brotherly love, tracking down the legend who was like family to his father. Rocky (Sylvester Stallone, as if you didn’t know that already) runs a tiny restaurant named after his late wife Adrian, living alone with his boxing days behind him. Creed lacks depth explaining the relationship between Adonis and Rocky, but the equalizing performances from Stallone and Jordan show enough chemistry to make us believers. Rocky transforms into a corner presence like his old trainer Mick while Adonis tries to become a worthwhile heir to the family name. Jordan previously worked with Coogler in Fruitvale Station, and they are a formidable duo, giving us politically and socially relevant characters without distorting reality to falsely service or appropriate the story. These are two talents you’ll need to keep your eyes on.

Along the way Adonis meets a woman named Bianca (Tessa Thompson), his neighbor and a promising singer with her own issues. Most movies would have labeled Bianca as the love interest – which she is here – but she is propped up by the unsurprising range of Thompson, continuing to prove she is a rising star. You watch this woman on the surface level and yet Thompson still manages to inundate us with information about her character. In a different universe she could lead just as compelling a movie. The real star here is Stallone though, for reasons you might not expect. It’s the first entry that Sly hasn’t scripted because he didn’t feel he could properly connect to young audiences. That decision shows great wisdom. Rocky has fought the good fight, living past his expected expiration date devoid of purpose. Stallone will be in discussion for Best Supporting Actor, not out of prestige, but because of his layered delivery. Time has beaten and bloodied this man more than any opponent could, and somehow he manages to channel the spirit of the boxer we’ve seen throw jabs while also inviting his own dissolve. Stallone is a fine actor and in Creed, bearing less responsibility, he has perfected an icon.

Creed features great editing and some fine camerawork, most notably two separate sequences that go from the training room to the fight in one long shot. Coogler uses circling and counter-circling to bring us in to the ring, as well as some great crane shots to position us in the crowd, making the experience immersive from all angles. So even though the human opposition is razor-thin, the film works beyond that because Adonis’ greatest adversary is himself. He fights to find personage, purpose, and to escape from the shadow of a man he never even met. Coogler’s movie may be long, but it is justified by the purposeful pursuit of its protagonist. And the moments of all out blinding blitz are superseded by enough crafted character details to make us care, for the people to matter, and for the scorecard to always be in its favor. The movie culminates with a scene that not only passes the torch, but shares the moments of the then and the now, happily slapping gloves and facing whatever fight it has to face next. Creed doesn’t just rekindle a franchise; it breathes fiery resolve into itself. This new foray balances mature judgement with youthful tenacity.

“You are you father’s son, and you are part of him, but it doesn’t mean you have to be him.”