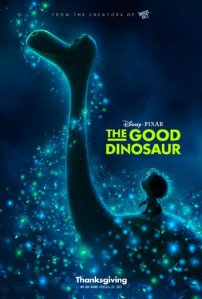 Pixar has become synonymous with being the leading storyteller in animated filmmaking. They’re progressive, smart, intuitive. What really separates the majority of their movies from the rest of the pack is their daring originality combined with honest human reflections. Because of them we have cried and laughed alongside fish, a rat, toys, bugs, monsters, robots, cars and anthropomorphic emotions (just to name a few). This time around they go the prehistoric route with a big “what if” of a story. What would the state of the world be had the Ice Age never happened? If that meteor never struck Earth 65 million years? The Good Dinosaur, somehow, is probably Pixar’s most high-concept story to date, following dinos that talk and farm the land and make families. However, it’s also one of their laziest narrative features, lacking the trademark sense of fun and adventure that have made the studio a staple as surefire entertainment for the entire family. I could not have cared about this movie any less.

To its credit, The Good Dinosaur is a full-blown and by the books Western, which comes as a pleasant surprise and breaking off point from typical animated movies. In a family of five, we follow Arlo (Raymond Ochoa), the runt of the litter. He’s little and terrified and clumsy. Arlo is a hindrance to his family. Peter Sohn’s film speaks with terribly on the nose dialogue and unimaginative situations. So after a predictable tragedy, Arlo gets lost and must make the quest back home, finding strength in himself before finding his way back to the farm. Tagging along with Arlo is Spot (Jack Bright), a caveboy with whom he sparks a friendship. Spot manages to be the film’s best character because his inability to verbally communicate challenges the filmmakers to delve deep into the power of visual storytelling. A lot can be expressed with eyes and gestures and grunts. The dinosaurs can speak, yet aside from a T-Rex voiced by the perfectly cast Sam Elliot, none of the performances stand out. The Good Dinosaur tries to say volumes through tongue when its only good moments come in peace.

The opening shot shows some herbivores chomping away, briefly looking up at a streak against the sky, unaware and quickly forgetting how close they were to their demise. That’s exactly how the movie feels. The Good Dinosaur certainly wows us with stunning visuals, but all the good looks in the world can’t cover-up such a blatant shortage of personality. Originally set to be released a couple of years ago, the entire cast and even the directors were scrapped due to serious story issues. Despite the changes, Pixar’s latest still just isn’t very good, or funny, or touching. Problems aside, it is a step forward for animation as a story tool. Brilliant photography mixes with unthinkably realistic landscapes to fill the canvas with artful images. You’ve only see water look this real when it’s right in front of your face. The Good Dinosaur is a Bob Ross painting done without any of the man’s guidance or warmth.

Maybe Pixar has unfair and typically unattainable standards after making so many groundbreaking movies. That’s a high-class problem to have, at least until they release something like this, easily towards the bottom of their slate of 16 full length features. Simply put: The Good Dinosaur does not have an audience. There’s an incredibly awkward scene where Arlo and Spot hallucinate from wild berries that kids won’t get and adults will shrug at, shortly followed by a funny scene resembling a wild game of whack-a-mole. Mostly though, the movie just doesn’t resonate. Earlier this year I saw Inside Out with a packed crowd. I heard kids squeal and parents cry, with all of the important emotional beats stirring a silenced concentration. The Good Dinosaur accomplished none of that because those qualities are nowhere to be found. This hit or miss movie may be one of Pixar’s best visualizations, and it just so happens to be held back by one of their absolute worst stories. At least the unorthodox short film that comes before doesn’t create absolute indifference.