“We have dreams and imaginations to help us escape.”

As a child – and now as a grown man – an unhealthy amount of my leisure life has looked like the image below. Spellbound by screens of all shapes and sizes, melting into fictional worlds near and far, completely and utterly fascinated by the structure and the power and the purpose of storytelling. Brigsby Bear embodies all of these sentiments, and better yet, it dares to proudly dress itself in the truly overwhelming feelings that great films are able to elicit. Here is a movie for the outsiders, the loners, the individuals who feel isolated. For the people who connect to ideas and beliefs better than they do strangers. Brigsby Bear venerates cinema as savior and allows artistic creation to serve as a means of heart to heart communication. This is my kind of prayer and worship.

James’ (Kyle Mooney) life revolves around the colorful, occasionally crass, and educational show titled “Brigsby Bear.” Holed up in a bunker with his parents Ted (Mark Hamill) and April (Jane Adams), James does chores and tends to his studies. His spare time is entirely dedicated to watching the children’s program though, his bedroom walls lined with countless VHS tapes, the recordings whirring and warped from age and overuse. Even his nightstand lamp is molded with the bear’s body. We aren’t told how old James is but we can tell he’s stuck in a childlike state. This show – or, more appropriately, this belief system – is James’ only tie to the outside world. To him, connection comes from the belief that everyone in the world is watching “Brigsby Bear” at the same time as he. And in that respect, despite its poor character development and rather rushed conclusions, Brigsby Bear unifies its audience through carefully nuanced and thoughtful creativity.

Ted never discourages James’ curiosity into the outside world nor does he really promote it. Their space is safe and it is comfortable. It’s all a ploy, though. Ted and April aren’t really his parents; we come to learn that April stole him as a baby and Ted welcomed a Son who felt like his own. They’re not horrible people per say even though they admittedly did do a very bad thing. Sure, they isolated James and manipulated his mind, yet they still forced him to learn, to be part of a family unit, to fulfill the mind’s potential in their small abode. James simply does not know any better. So as he sits outside throwing rocks, contemplating existence and wearing a gas mask, cop car lights bleed into the horizon and quickly encroach. What once was an unquestionably honest life slowly peels back the lies layer by layer. It’s as hilarious and awkward to watch as it is achingly naive. 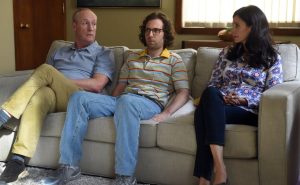 As the story progresses and changes, the tone becomes less peculiar and increasingly endearing. James’ former life lived in his “mom and dad’s” make-belief world borrows some elements of Yorgos Lanthimos’ Dogtooth, swapping out the critical bite for a satirical bark. And once he’s reunited with his real parents (Matt Walsh and Michaela Watkins) and his disinterested sister Aubrey (Ryan Simpkins), the script has a similar likeness to 2015’s gut-wrenching Room. However, Brigsby Bear doesn’t aim to shatter our emotions or to induce tears as easily as that Brie Larson starring film did. It’s approach is lighter – almost something like Blast from the Past meets Michel Gondry’s Be Kind Rewind – with hilarious jokes and a fish-out-of-water awkwardness that helps to soothe the trauma of learning how to live again, and how to live differently. 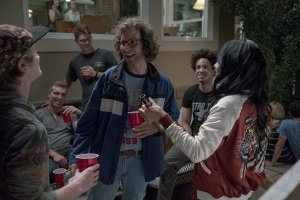 Brigsby Bear is a film with some big issues (most notably its unwillingness to thoroughly deal with the traumatic events) but is also so unshakably impassioned and sincere that my head and my heart never lingered on them. There are blemishes and they are noticeable, but like any person you’ve ever truly loved, you embrace their imperfections, and eventually they only add to the inner beauty. As James sets out to make a “Brigsby Bear” movie and to finish the story, we come to understand that this is his means of coping, of catharsis, of making sense of an unknown world. He can’t begin to write his new life unless he finishes his old one. It’s such a beautiful mess to watch. His first kiss, first time seeing a dog, first party, and most importantly, his first time ever sharing “Brigsby Bear” with the rest of the world. Some independent films like this little gem often feel contrived, so obviously trying to be different for different’s sake. Brigsby Bear so clearly comes from the heart and from experience.

Competently and quietly directed by Dave McCary, Brigsby Bear differentiates itself thanks to writer/lead actor Kyle Mooney. I’ve always been a fan of his off-brand, charming, stuttering sense of disheveled humor. Here his performance is one of a kind, a bit like an early Andy Kaufman but only more energetic and boyish, and while he makes us laugh, he also has the ability to become completely withdrawn. That takes talent. I suspect it’s so successful and transparent because Mooney might have had a similarly alienated upbringing. Maybe he was the weirdo and the outcast who struggled to make friends and instead resorted to consuming mass amounts of analog media. I’d bet that assumption is at least half right. And so as the film comes to its finale with James making his movie and wanting to share “Brigsby Bear” with the rest of the world, Mooney’s script leaps forward into the realm of brilliance. James hurls into a toilet bowl and wonders, “what if they don’t like it?” With that line James is essentially asking, “what if they don’t like me?” His new friend Spencer (Jorge Lendeborg Jr.) tells him, “who cares.” It’s a statement, not a question, and it encapsulates what Brigsby Bear is all about. In a time where anonymous bullying happens beneath fingertips, this small film stands tall and firm in its message of unrestrained kindness to all.

“There’s not a lot of stuff like this out there.”