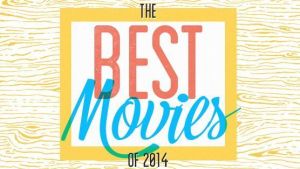 2014 was an outstanding year for cinema. From the blockbusters to the little indies, there were some truly exceptional films. I saw as many as I could, but you can’t see everything, and there were a number of movies that I’m sure could have made their way onto this list. Alas, I can only rank what I’ve seen. Here are the films I have yet to watch, followed by the 50 best I saw from this past year.

Didn’t see – The Homesman, Mr. Turner, Two days One Night, Listen Up Phillip, Leviathan, Hector and the Search for Happiness, Kill the Messenger, The Trip to Italy, Laggies, Rudderless, 20,000 Days on Earth, How to Train Your Dragon 2, Get On Up, A Girl Walks Home Alone at Night, Wild Tales, Finding Vivian Maier, The Kingdom of Dreams and Madness, Predestination.

50.) We Are the Best! – Set in 1982 Stockholm during the rise of disco and the death of punk, We Are the Best! emphatically looks at generational gaps. Three young girls, only one of whom knows how to play an instrument, start their own band to rebel, and come together, during the part of adolescence where identity is crucial. It’s funny, insightful, and as riotous as the bands eschewing the mainstream.

49.) Love Is Strange – John Lithgow and Alfred Molina play seasoned lovers forced to move from their longtime apartment. While bits can be extraneous, Love Is Strange offers something important for viewers of all sexual orientations. Love can always work, but you have to be willing to put in the effort. The tremendous acting appeals to all of your emotions.

48.) The Imitation Game – As ordinary as a biographical film can be, The Imitation Game succeeds solely because of two tremendous pieces of acting from Benedict Cumberbatch and Kiera Knightley. It’s clichéd, at times even forgettable, but the fine British actors save the day. Their performances are nuanced and elevate an otherwise benign, average movie.

47.) The Congress – Easily the wildest, trippiest ride I had watching a movie this year, The Congress is a blend of live action and transitions into beautiful animation. Robin Wright plays herself, an aging actress who is scanned into a computer, her likeness to be used as a forever young leading lady. It’s Hunter S. Thompson level out there, but it’s also deeply emotional and paints a dubious, colorful picture of Hollywood’s unattainable standards.

46.) Young Ones – Bolstered by a tremendous cast, Young Ones is the sci-fi western nobody asked for but we all needed. The narrative is scattered, yet underneath is a visually stunning film. It’s entirely original in its depiction of the not so distant future and grounds itself in the dog eat dog, profiteering, Machiavellian commercialism we’re surrounded by today.

45.) Only Lovers Left Alive – A hilarious vampire rockudrama and the latest from the mind of Jim Jarmusch, Only Lovers Left Alive is unlike any bloodsucker movie you’ve seen. Resembling the Greek tragedy of Orpheus and Eurydice, minus the melodrama and added stakes (pun intended), this is a film that really has to be seen to be understood. Even without a definitive message behind it all, it’s a creative step forward in a genre that’s become increasingly stale and thirsty for new blood.

44.) Inherent Vice – Too incomprehensible for most filmgoers and probably a little too vain for bona fide cinephiles, Inherent Vice is a lengthy and hazy head trip. Its place on this list is deserved because of Paul Thomas Anderson’s unique capability to allow us to see and experience this cloudy story through the lens of Doc Sportello. He’s always confused, normally drugged out of his mind, and the constant befuddlement injects itself into the viewers. It’s a divisive film, but it’s incredibly well-made.

43.) The Giver – A rare successful page to screen adaptation, The Giver stood out to me because of its gorgeous visuals. The story, as depicted here, is a lot cheesier than the book. But almost like something out of the Planet Earth series, best viewed on the largest, brightest screen possible, it’s lavishly poetic. It’s a journey of hope, and by the time it ends, I’ll bet you feel the vibrancy.

42.) Dawn of the Planet of the Apes – A vast improvement on its predecessor, this sequel pits the apes versus the humans, and although it’s temporarily postponed, the showdown is inevitable. The amazing CGI creates a realistic palette for the civil war that follows. A sharp, anthropological look not just on the origin of species, but also the extinction, Dawn of the Planet of the Apes is a blockbuster with brains.

41.) Still Alice – This is a one woman show with Julianne Moore pulling out all the stops on her way to the Oscar podium. That recognition is long overdue and much deserved. Still Alice is a smart, quiet, gentle film about Alzheimer’s harsh realities, all honestly realized by one of the greatest living actresses.