Remember when Batman Begins was released and everyone thought it was pretty good? And then The Dark Knight came along and blew that first installment out of the water? That’s the exact same case with the latest go around in the Planet of the Apes series. I don’t think it’s the best movie released this summer, but it is definitely the most profound big budget film, full of sociological questions that fall back on the age-old question. Are we, humans and animals, all that different? The answer isn’t so simple and neither is the film. It’s dark and contains almost no monkeying around. We don’t know what side to root for and neither do our main characters. Sit back, if you can brace yourself from edging towards the front of your seat, and take in this movie. Dawn of the Planet of the Apes is a cinematic achievement that should be fully experienced.

Set roughly ten years after Rise of the Planet of the Apes, the simian flu has grown into a pandemic and exterminated all of the humans not fortunate enough to have a genetic mutation flowing through their veins. A colony of sorts resides in San Francisco, or what’s left of the city with its buildings overrun with ivy and grime. They’re running out of an energy source to power equipment used to attempt communication with any other survivors. There’s only one catch. The dam they need to use is in the forest, as are the apes, not hidden but discreet enough to have not seen a human for two years themselves. And you guessed it…they come to meet.

Malcolm (Jason Clarke) is a leader of sorts for the humans. He makes contact with Caesar (Andy Serkis), the unmistakable patriarch figure of the apes. The message is clear. “Do not come back,” says Caesar. Unfortunately for Malcom he has to deal with Dreyfus (Gary Oldman), a bullheaded old man who refuses to believe they’re more than animals. On the flip side, Caesar has his hands full with the vengeful Koba (Toby Kebbell). Koba dons his hate for the humans on his scarred face that they gave him in testing labs. Malcolm wants to help the apes because he knows they are more than just animals. Caesar wants to help the humans because he knows he is as much a human as he is an ape. Trust plays a major component and it’s engaging to watch unfold on-screen.

Caesar has his partner, son Blue Eyes, and newborn to look after. Malcolm’s family consists of Alexander (Kodi Smit-Mcphee) and second-wife Ellie (Keri Russell). Caesar is the main protagonist between the two, but their circumstances are undeniably similar. They don’t want to go to war and kill others as well as their own kind. They merely want to survive. Which is hard to do when surrounded by cowardly individuals full of trepidation. They fear what might come to be. Dawn has an incredibly detailed plot for a summer blockbuster, and while giving away more hints wouldn’t necessarily ruin the film, it’s better to go into it unknowing of what’s to come.

Visually, this is the most astounding film I have ever seen. No exaggeration comes with that statement. Watch this short clip to take some more appreciation for what the crew was able to pull off. Every furrow of a brow or snarl of a lip is actually done by the actors in the performance capture suits, and what they deliver is even better than the actors playing their human counterparts. Not enough praise will find its way towards Serkis and Kebbell. Which is a shame, because what they give us as an audience is entrancing to watch. The attention to minute aspects is pure artistry. Notice the detail in the scene when Malcolm confronts Caesar and his troops. His white shirt, along with Caesar’s white chest paint, show their good in a sea of dark colors. Two virtuous characters so similar in outlooks are surrounded by Judas like figures.

My only critique, and it’s a major one, is that this is two entirely separate movies welded together by careful editing and Matt Reeves’ excellent direction. The first half is tense and plodding, but never feels slow, while the rest of the film is an onslaught of action set pieces. It jumbles the tone of the film, and while the superb script tries to interject intimate dramatic moments, it just doesn’t mesh. I guess that’s how revolutions work though. Quiet, quiet, quiet…and then full out charge. I don’t really know how else to put it or what the movie is missing. It’s ambitious and enthralling but just lacks that last punch to make it a knockout. Oh well, a T.K.O. is better than what audiences normally get.

This is about as anthropological a film as you’re likely to see for some time. The apes have gestures and movements, subtle things that might seem arbitrary but make all the difference between them and us. And then there are the humans, almost unwavering in their stance to reign over the rest of the animal kingdom despite their vulnerability to the Simian flu. It explores the sociocultural, biological, and linguistic branches of the study of our species, and most certainly they’ll delve into the fourth branch later on (archaeological). Most wars are inevitable. Dawn is no different. It closes on a dark tone, foreshadowing the bloodshed between the humans and apes that will undoubtedly come. 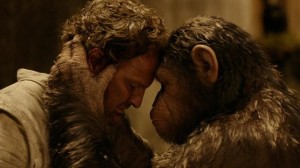 I took a college course on anthropology, and after some digging through old notebooks was able to find a quote I recalled that paired well with the film. “If anyone, no matter who, were given the opportunity of choosing from amongst all the nations in the world the set of beliefs which he thought best, he would inevitably, after careful considerations of their relative merits, choose that of his own country.” That was by Herodotus (don’t ask me anything else about him…I often fell asleep during the class.) That quote struck me, and it deeply emphasizes the peril of both species in Dawn of the Planet of the Apes. Both want what’s best for themselves and the others, but that’s simply not viable or practical. The dawn of the apes is coming, and this stirring film makes me eager to find out when. As a human, the irony in that statement is laughable.