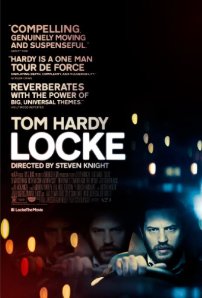 “I’m not coming home. I’ll fix it and we’ll all go back to normal.”

Never have I seen a film like Locke, or at least not one that works so well with a particular storytelling method. For about 80 minutes we ride around with the main character as he drives across London. It’s polarizing and unconventional. Obstinate audiences will think it’s another unsuccessful gimmick movie, others will be intrigued and wondering where the hell the story could possibly go. Either way, both sides would likely agree that Tom Hardy’s performance fills the screen with as towering a figure as a seated man can have. It’s him alone on the screen and he carries the movie with a hefty, rugged performance that’s simultaneously graceful.

Ivan Locke (Tom Hardy) is the foreman for a construction company. He opens his car door at the construction site, gets in, and it’s claustrophobic from there on out. Locke leaves on what is to be the biggest pour in Europe’s history. It’s a one man show with an accompaniment of a few voices. Donal (Andrew Scott) is his assistant, an incompetent stand in for Locke. The beers he enjoys on the job don’t help either. Locke’s wife Katrina (Ruth Wilson) and their two sons expect him home for a football match and are informed he has to be elsewhere. Bethan (Olivia Colman), a colleague of Locke’s, is in childbirth. The baby is his. We see his choices, where they take him, and the consequences they create all unfold in less than two hours.

Directed and written by Stephen Knight, the film was shot in the span of a week following lengthy rehearsals. With multiple cameras in use at once, each night the team went out and essentially shot the entire movie, then came back and did it all again the next day. That’s incredible, especially when considering the sheer magnitude of Tom Hardy’s performance. We figure out the rules after a few minutes in and realize we’ll be spending the evening riding around with this character. Bursting with dialogue and subtle nuances, Hardy gives what amounts to a stage performance. That’s exhausting work. The voicework throughout is impressive, as well as the cinematography. It’s vital to have talented people behind the camera so that the finished product is consumable. This thrives because it’s such a visual treat.

I can’t stress enough how much of this movie falls squarely onto the shoulders of Hardy. His performance is incredibly physical for taking place in the confines of a BMW. Locke rolls his sleeves, wipes his mouth, pulls at his collar. So many actors use these actions to make their characters feel more realistic, such as the classic nudge of glasses, but they never become more than a tactic gesticulation. Hardy’s movements never feel forced and instead show us his plight. His tone is always cool and calm. Frustration get’s the best of him once the entire time, and then he collects himself to answer a phone call saying, “Ivan Locke.” Few actors have Hardy’s presence and capability to pull this off.

Sometimes a review can go into a fair amount of detail without giving away everything and other times it can’t. This is the latter, mostly because there’s little to spoil. Locke is a linear movie, traversing from point A to point B across the dimly lit London highways. There are moments when Hardy talks to thin air, pretending to converse with his absent father, and it carries that Shakespearean tone throughout. Hectic pacing leads to frantically solving one problem only to get called up with another. Filmmaker Knight takes his time and slowly reveals Locke’s motivations along with the harsh reality his choices create during the fateful evening. Solid editing, confident direction, and the defining performance thus far of Hardy’s young and promising career make Locke a solid and constantly demanding viewing experience. It’s a quick watch and most certainly worth seeing.

“I’m not going to turn back. I have made my decision.”