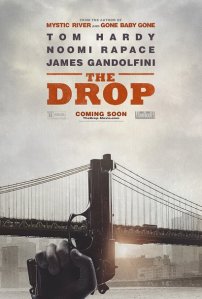 “There are places in my neighborhood that people forget about.”

The Drop is a tight, tense, gritty look into the illegal and seedy happenings of Brooklyn’s underground criminal network. The title refers to a “drop bar,” which if you don’t know (I didn’t), is a bar randomly chosen to hold the city’s dirty mob money for the night, then allocate the funds the next day. It’s a bank and a booze tent all in one. There’s a lot that goes on in this fast-paced and lightning quick story, almost to the point that I found myself missing crucial details and trying to remember the exact words and facial expressions from each character. That’s what makes the movie, which is rather compact and dense, so intriguing. Everything matters. Did it all make sense? No, not to me at least, although I’m sure the fog would lift with repeat viewings. There’s a loyalty between the protagonist and the rest of the characters, and Michaël R. Roskam’s honest directing establishes that trust with the audience. The Drop is a gripping, intense ride.

Cousin Marv’s bar acts as the center piece to the story. It’s run by Marv (the late great James Gandolfini), a former loan shark who passed ownership over to Chechen mobsters years ago. Alongside him is his cousin Bob Saginowski (Tom Hardy). Bob is simple to a fault, saying through early narration, “I just tend bar.” While that’s true, there are hints at his deep back story planted all over the movie. There is more to Bob than his quiet voice and Igor shuffle imply. His dark past is suggested by his weekly attendance at mass while refusing communion each time. I can imagine him being a snapping turtle hiding in his shell, afraid to come out and lose his temper once again. Late one night, long after last call and the crowds have stumbled, maybe crawled, back to their homes, two armed men wearing masks and covered head to toe storm in and demand money. It’s not the bar that they’re robbing. That would be the Chechens, and you can assume they aren’t too happy being out $5,000 in a single night.

The movie’s effective B story involves Nadia (Noomi Rapace) and the wastrel punk Eric Deeds (Matthias Schoenaerts). Bob’s path unintentionally crosses with Nadia’s while walking home after a night shift. He hears a crying dog and the sound is coming from a garbage can outside Nadia’s place. Inside is a bloodied, cut up pit bull, and Nadia has Bob bring the pup in to get cleaned up. There is an instant friendship and bond formed between these two. Not necessarily romantic in nature or lusting for the other’s affection, they are two worn down people who find a glimmer of hope and solace in the other. Not all good things last though. Especially with Eric Deeds forcing himself into the lives and homes of Bob and Nadia. Deeds is a degenerate and a loser who prides himself in taking credit for the infamous murder of Ritchie Whalen years ago. He’s the kind of bad person with no redeeming qualities, who no matter what, will never amount to more than the scumbag that he is.

Adapted by author Dennis Lehane from his own short story, (you’re probably familiar with other movies based on his work: Gone Baby Gone, Mystic River, and Shutter Island) The Drop has a lot of moving pieces and plot elements that can’t be shared without spoiling the constant unraveling of one revelation after another. I can, however, discuss the superb performances, namely from Tony Soprano himself and the genius Tom Hardy. In his final performance, Gandolfini went back to the crime genre that served him so well throughout his career. Marv bears resemblances to his most famous role while distancing itself through nuance and detailed writing to feel original. Marv isn’t a good guy, in fact he’s one of the worst people in the movie. But he has his rightful reasons and tries to justify his reprehensible behavior by taking advantage of situations and individuals. Including Bob.

With the one-two punch of Locke and this movie, Tom hardy just might be the MVP of 2014’s leading actors. I hate the phrase, but both are absolutely tour de force performances that hit every high note possible. Marlon Brando had On the Waterfront, and Tom Hardy has The Drop. THAT is how phenomenal this once in a generation performer is. His talent knows no boundaries, has no creative or artistic limitations. As a whole, The Drop works beyond measure, yet while it may be my own appetite for more of this story and these characters, specifically Bob, the film felt incomplete. You could write a dissertation on Bob Saginowski and the possibilities of his past life. There’s a Cronenberg A History of Violence vibe to the proceedings that is never brought to life or breaks the water’s surface to gasp for a lifesaving breathe. I needed more. What I did get from the film was emotionally visceral and physically brutal. The Drop is a compass whose magnetic needle always points towards north, guiding us straight ahead into unflinching moral turpitude.

“There are some sins you can’t come back from no matter how hard you try.”