“It’s kind of a corny, romantic comedy kind of story.”

There’s really no way to spoil this movie. You already know exactly what is going to happen. They Came Together attempts to make fun of the romantic comedy genre, yet it’s so uninventive that it only makes fun of itself. There are funny bits, but the movie as a whole is underwhelming, stupid, and a waste of time. I still can’t believe how uninspired and awash the story is with banality. Some effort might have improved the movie, but ironically it never comes together.

Joel (Paul Rudd) and Molly (Amy Poehler) are out for a nice dinner one evening with their pals Karen (Ellie Kemper) and Kyle (Bill Hader). They recall their relationship and how they’ve gotten to their current situation. The two are described as your typical main characters. He’s kind of handsome, she’s sneaky cute. New York is said to be a character in the same vein as a Woody Allen movie. Molly owns a quaint candy shop that accepts donations but doesn’t rely on customers paying to get by. Joel is unhappy with his job as an executive at Candy Systems and Research. They’re setup on a blind date and wear the same Ben Franklin costume…it’s your standard clash of opposite personalities. 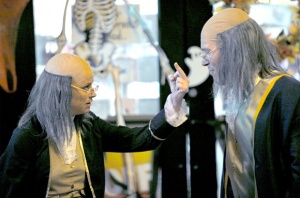 Rudd and Poehler do the best they can with the material they’re given. I’ve always found Rudd to be one of the best comedians in the business when it comes to facial expressions and timing. Here is no exception as he plays a satirical version of his usual typecast. And the same goes for Poehler. We also get to see her more physical side, like a hilarious sequence where she describes herself as a klutz and proceeds to fall down every step and break everything that she touches. For how much I disliked the movie, I actually laughed a lot. Don’t get me wrong. It’s funny. But nothing about it sticks with you. Had I not read over the notes I took while watching it, I probably would have forgotten the majority of what I saw. 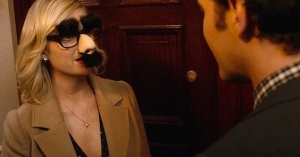 Director David Wain’s 2001 film Wet Hot American Summer was received poorly and universally smashed by critics. It’s grown into a bit of a cult classic and to this day is one of my favorite comedies. Check it out if you haven’t seen it, it’s hilarious. They Came Together attempts to copy the same formula as WHAS from more than a decade ago. That movie worked because it had so many characters. There was one character to personify every specific cliché or stereotype that you can associate with young adults working at a summer camp. The virgin, the closet gay, the drama queen, the slut, the naïve nice girl, the social outcast. And that’s only naming a few. Wain fails this time around because every stock character and story trapping are thrown into two people. Joel and Molly are so jumbled and stitched together by bits and pieces of things we’ve already seen that they never resonate. Good actors fill the roles and make us laugh, but the character development is so poorly thought out that you struggle to know who they are. The end result is a letdown.

Reviewing a movie, or even just giving a quick synopsis, is usually a pretty easy and quick sit down with the computer. It’s like a memorable day, amazing or terrible, and recounting moments and the way they made you feel in a diary. This was different, and the quality of my writing probably reflects it. In some ways it felt like the morning after a long night out with too many drinks and too many quick conversations with those people who you think you know but deep down actually don’t. You share some laughs, stumble around and clumsily spill a drink or two, then you wake up in need of some water and Advil. Like most people in that state, They Came Together never fulfills what it promises.

“You and I are like rainproofing on a wooden deck…finished!”