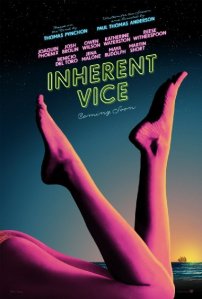 “They’re helping me wake up from my bad hippie dream.”

We’ve all had the typical nights that we won’t remember with the people we won’t forget. That’s Inherent Vice. There’s little to no plot and so many characters, all of them memorable in their own right, that at one point I wrote in my notes, “starting to lose track of all these people.” It’s a hard film to get through, but in no way or shape is it bad. Adapted from the story by author Thomas Pynchon, notorious for his dense and overly complex novelizations, Inherent Vice will undoubtedly lose you. I had to read the plot summary on Wikipedia immediately after I watched it, and even then I still wore a veil of ambiguity and confusion. What it does best though, mostly because of mastermind director Paul Thomas Anderson, is allow us to experience the unfolding shaggy dog story exactly how our protagonist, the drugged out Private Investigator Doc Sportello, does while he moseys his way around 1970’s California. 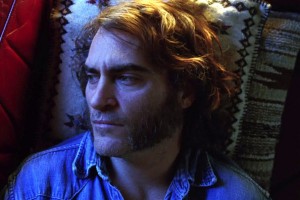 Laying on his couch, the mutton chopped and disheveled Doc (Joaquin Phoenix) stares out his window, deep in thought with his current drug induced high. Into his beachfront home walks Shasta (Katherine Waterson), Doc’s former lover, now engaging in a romance with local real-estate giant Mickey Wolfmann (Eric Roberts). Shasta believes Mickey’s wife and her lover plan to have him committed to an insane asylum, so she has come to ask for Doc’s help and not for his forgiveness. It’s the start of a wild, winding trip built layer upon layer, each setup and plot development more trifling than what came before.

That’s the main trajectory of the story, although as we follow Doc, case after case, always merging paths with the others, things begin to seem insurmountable. This is one of the most opaque films I have ever seen. Honestly, I would regurgitate more of the plot, but I’m afraid I either remember too little or would go into too much detail in certain areas. Inherent Vice is the story of Doc seen through his own eyes. Some characters magically come and go, forcing the audience’s hand to question whether or not they’re actually real or if they are the side effects of constantly being under the influence. The prime example is Sortilège (Joanna Newson), the movie’s narrator. Personally, I believe her to be an apparition, a physical manifestation of Doc’s subconscious. She’s the lucid, intelligible side of an otherwise constantly befuddled man. The narration is so beautifully written by Paul Thomas Anderson that I could have just listened to the film and had the same vivid, stupefied adventure.

Inherent Vice is so full of themes and metaphors that I’m not sure any of them ever really get a chance to shine. I’d bet it works better in the more unrestrained confinements of literature, but here it’s just so overstuffed and unreasonably complicated. Doc is always in over his head, and so are we, because as a film Inherent Vice is like wading into the ocean carrying a cinder block of characters and subplots that will surely drown us should we tread far enough out. As an audience, we can’t solve anything or stay finely tuned in when the story at hand is incoherent. Paul Thomas Anderson is a genius filmmaker, there is no doubting that. From his debut to now, the man simply makes beautifully striking films to look at that also engage our thought processes. But the farther he’s gotten into his career, the more inaccessible I’ve found his films to be. Movies are the gateways to different worlds, portals we’re allowed to briefly jump into and temporarily experience something/somewhere that we otherwise could only imagine. We certainly get that with Anderson’s films, but I’m afraid he’s starting to carry that cement block so far out that the audience becomes too fatigued to make the swim back inland. 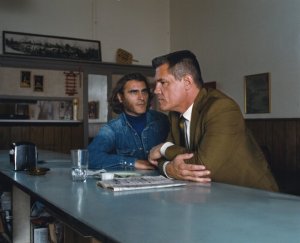 “Inherent vice is the tendency in physical objects to deteriorate because of the fundamental instability of the components of which they are made, as opposed to deterioration caused by external forces.” What a perfect title. Inherent Vice is an often funny, curiously fluid ride where almost nothing stands out. On a technical level there is absolutely nothing wrong with the film. PTA is the best modern director when it come’s to the rule of thirds, and his balance between all of the story’s tonal shifts is truly remarkable. It’s the story, the parts that Inherent Vice is made out of, that keeps it from telling us the sobering account of a pot smoking, cocaine snorting, nitrous oxide huffing man trying to determine which case to take and what drug to do next. Doc Sportello embodies the clashing virtues of the 70’s drug landscape versus the changing trends in law enforcement and pop culture attitudes. Inherent Vice never amounts to much, but it’s still a great, accurate reflection of a period of America lost to time.