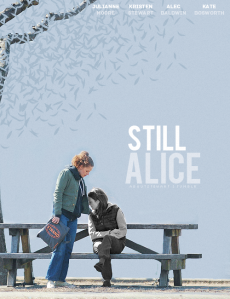 The song Dance Me To The End Of Love has Leonard Cohen famously singing, “Show me slowly what I only, know the limits of, dance me to the end of love.” In Still Alice, a crushing tale of disintegration, we encounter a woman whose life could be those lyrics copied and pasted. It’s a story of unintentional epistemic pursuit, a heartbreaking portrayal of just how cruel our bodies can be while a once rich mind is reduced to nothing more than an empty void searching for truth. Still Alice is equals parts encouraging and tragic. 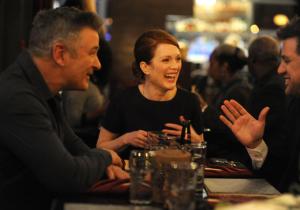 An esteemed Linguistics Professor at Columbia, Dr. Alice Howland (Julianne Moore) is at the top of her field. She’s married to fellow professor and Doctor John (Alec Baldwin). The film opens with a birthday dinner for Alice. Their lawyer daughter Anna (Kate Bosworth) is there with her husband while the lone son Tom (Hunter Parrish), a Doctor as well, arrives late…he had to care for a man with multiple stab wounds. Absent is the youngest Lydia (Kristen Stewart). She’s busy in L.A. trying to get her acting career going. The scene might feel aimless, but it shows us character traits, introduces each individual, and nicely sets up a soon to be tested family.

Alice starts forgetting words, getting lost on runs through campus, introducing herself more than once. All little things that raise big questions for a person of such striking intelligence. Alice and John are so smart they’re like patients who looked up possible diagnoses on WebMD. She has a rare kind of early onset Alzheimer’s. It’s familial, and her children have a 50/50 shot of inheriting the disease. The discovery is devastating. To see a woman with such control over her life lose that command is demoralizing. Even worse is to witness her helplessness as a mother inadvertently passing a deadly disease to her children. Almost everything is out of her hands. 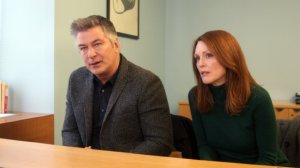 Directed/adapted by Richard Glatzer and Wash Westmoreland from the novel of the same name, the two deliver fantastically nuanced and subtle results. They capture all the little and intimate details that make the story feel real. Alice writes words on a chalkboard and sets a timer to test her memory. Shots go from her wide awake at 1 in the morning to 4:30, showing her restlessness. It’s mightily impressive. The tandem are able to get good performances from the supporting cast, but this movie is Moore’s from the onset.

As Alice, Julianne Moore will be nominated for her 5th academy award, and although I enjoyed Felicity Jones more in The Theory of Everything, I have to believe Moore will get her first win. This is her movie, one that the directors hoped she and she alone would star in. She’s the perfect choice to show us the crippling effects of Alzheimer’s. It’s a slow burning candle, one full of overwhelmingly turbulent emotion. Moore retreats into her character’s empty vessel and simultaneously brings to life a woman whose own being is steadily entering egress. You won’t find much better acting this year. 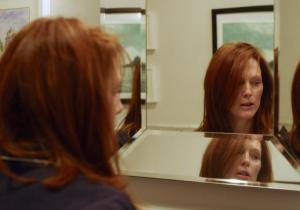 Not since 2007’s masterful film Away From Her, one of my favorite love stories, has there been such a realistic and honest portrayal of Alzheimer’s disease. Still Alice loses steam once it reaches its finale but that doesn’t lessen what it’s able to accomplish over the course of the film. This is a story about loss, the loss of oneself and those who we love. The effects of the disease are beyond ugly, but as the title suggests, underneath the hazy confusion and lapses in memory is the same person. Despite the change in personality and behavior, no matter how far gone she might seem, she’s still Alice and always will be.

“I am not suffering. I am struggling.”