The Theory of Everything can be summed up in one word: serviceable. The Oscar worthy lead performances standout, but besides that this is a pretty average tale about an extraordinary man and his devoted wife. But at the same time, it’s not entirely about his genius. Therein lies the problem. This could have, and should have, been a top 10 film of 2014. And due to its source material and fantastic leads it will likely garner a best picture nomination. I can name 20+ better movies that came out this year, yet because of who it’s about it’ll weasel its way into the coveted top category. The Theory of Everything ultimately suffers from the tolerance and approved assent of its own title. It’s part biopic, part love story, part everything else that can be crammed in. The end result is a good, not great, ineffectual film about one of the most influential minds of our time. 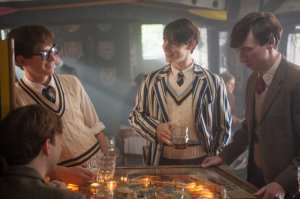 The film starts out with Stephen (Eddie Redmayne) as a physics student at Cambridge in 1963. He frequents bars, is the stroke for the crew club, and studies less than an hour a day compared to his classmates constant cramming. It’s clear from the get go that this man simply has it. The striking Jane (Felicity Jones) eyes his mopped and bespectacled head at a party and for some reason takes a fondness for him. She’s aligned with the Church of England, he’s an atheist. She’s an art student, he’s an aspiring cosmologist. They are so unique and different. That’s what makes the first third of the film the best part, full of some of the most romantic scenes of the year. Disappointingly, the course of their relationship doesn’t hold up and neither does the rest of the film.

It’s appropriate that the movie is being released during the widespread clearance and 2 for 1 sales of the holidays because that’s exactly what you get. Stephen battles ALS, Jane sacrifices her life for him, Stephen makes revolutionary scientific discoveries, Jane plays housewife. It’s a sad and at times excessively divisive story. Stephen is always likable and Jane is never less than a saint. The fault lies in how the story is told, and that comes down to screenwriter Anthony McCartern and director James Marsh. It could’ve solely been about Hawking’s theoretical pursuit. It would’ve been passable as a testament to the hardships of marriage and love through their trying relationship. But the writer and director try to do too much, resulting in a haphazard and by the numbers account, nullifying the effect that a direct story angle could have achieved. You can’t prove a theory without even making a thesis. 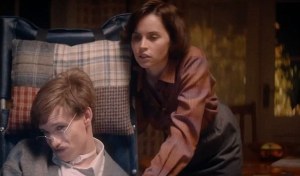 Lots of people have been flocking to this film because of Redmayne’s performance as Hawking. That’s deserving. Redmayne is insanely appealing, funny, and dramatically tinged as the historic figure. His mimicry is outstanding and just looking at him with his loss of motor skills will make you think you’re seeing the real deal. While I hate to say it, I think that takes away from his overall representation of Hawking. It’s so similar to Daniel Day-Lewis in My Left Foot, for which he won an Oscar. At times Redmayne’s dialogue is completely lost, and although he’s a marvel and spitting image as the paralyzed Hawking, his best work comes in the opening third as the youthful and endearing savant of the stars. I was so much more affected by Jones’ portrayal of Jane. Jones, a classic beauty who easily could’ve been a star of films Golden Age, is one of the best actresses of her generation. She’s able to say more with her eyes and her nuanced delivery than most performers can with Shakespeare soliloquies (watch Like Crazy and try not to fall for her). She absolutely deserves best actress consideration and is the front-runner from what I’ve seen. Redmayne may make the more visible impact, but see this movie and think about it a while after. Jones is the one you really remember. 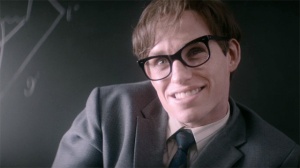 Redmayne and Jones bring a tangible chemistry to a film that’s otherwise lackadaisical and blase. We’ve seen all of this before, many times. A genius finding inspiration in something as simple as milk swirling in tea. Unsuccessful montages show crucial life events but never give an iota of detail. Nothing comes together and at times it can be maddening to watch. Once the movie had finished all I could think about was the film The Diving Bell and the Butterfly. That’s a masterpiece and so similar to this story, except that it decides what it wants to be and follows through over the course of two hours. The Theory of Everything, a story about a seemingly ordinary man harboring one of the best minds of the human race, relegates itself to such a lighthearted, unspecific, unengaging and schismatic story that it all boils over before it can tenderize our hearts. The unsuccessful attempt to be everything has resulted in an imponderable letdown.

“While there is life, there is hope.”