“The elders are never wrong.”

What a pleasant surprise of a movie. The trailers seemed obsessed with looking like the rest of the young adult fantasy films released in recent years. This is so much better and true to the beloved novel than I could have imagined. In The Giver, an emphatic point is made to differentiate between feelings and emotions. Feelings are fleeting, short-lived moments in time. Emotions, on the other hand, last much longer. They’re sort of like that distant friend you run into at the store, kind of familiar but not really, and twenty minutes later you’re still talking with them. Emotions stick around whether you want them to or not. This is a movie with structural problems and a disregard to delve below the surface level of the source material. Still, it’s an entertaining and visually stunning movie about finding more in life.

The year is 2048, and we’re told in the past there was a war that led to ruin. Now there are communities with leaders known as Elders and family units, made up of a male and a female and children that are assigned to them. The kids grow up and have ceremonies. One is to get a bike and learn responsibility, another is to be given a job up until they are “released.” It’s all about achieving sameness. They can’t lie. There is no color. Precision of language is of the utmost importance. Worst of all, they take morning injections that unbeknownst to themselves rids their ability to feel. For such a Utopian setting, the characters don’t seem as robotic as in other like-minded stories. These are just people that have had their lives taken from them. Except they don’t know it. 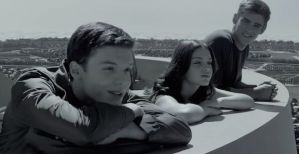 Jonas (Brenton Thwaites) is a sixteen year old boy anxious for his Ceremony of Growth and figuring out where he will be placed within the community. Tagging along is his rambunctious friend Asher (Cameron Monaghan) who has no idea where he’ll go. Fiona (Odeya Rush), a beautiful girl with a gentle soul, will certainly be placed in the nurturing center to care for the newborns. Jonas is skipped in the order and left to the end. Chief Elder (Meryl Streep) informs the crowd that Jonas has the four attributes necessary to become the next Receiver of Memory. He will be given all of the memories of the past in order to help impart wisdom on current decisions. But, of course, that’s not what happens. 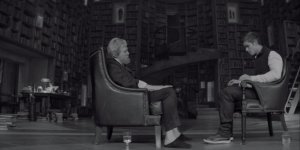 Jeff Bridges plays the Receiver of Memory mentoring Jonas to someday fill his position. Jonas recognizes that he now bears the title and asks the drained old man what that now makes him. “Well, then that must make me the Giver” he replies. Bridges delivers a tremendous performance in the role. He tried to get this film made for more than a decade, and he wows in his passion project. I was suspicious of the casting, mostly because I was so unfamiliar with their work, but they all deliver. Rush plays Fiona with a tranquil grace. Alexander Skarsgard and Katie Holmes, only known as Father and Mother, give quality performances that are as subdued as their characters. And Meryl Streep is, well, Meryl Streep.

Thwaites is the real shocker and proves he can carry the weight of a movie. It had to be a tough task bringing such a sedated central character to life and not make him outlandish at the same time. Maybe that’s partially due to the help of veteran director Phillip Noyce. This is a bold movie that could understandably turn away audiences. Although the Newberry Medal winning book was groundbreaking, those unfamiliar with the source material might think it’s all a copycat. Noyce, aided by great production design, tells the story the way it’s meant to be told. The colorless world boldly lingers much longer than I thought they’d dare to go before it slowly trickles back in. That’s a ballsy and artistic move, showing that you don’t have to sacrifice quality.

The last act is rushed and would’ve been helped by having more time. As far as I can remember (it’s been years since I’ve read the book), it plays out pretty similar. Jonas becomes determined to make the people around him feel what he has been able to feel. To learn how to love. He’s driven by the memories the Giver shares with him, and that was my favorite part of the movie. We see lush landscapes, visual displays of joy and laughter and dancing. The magic of music. And we experience pain, the emotion of death and sorrow and loss. It’s fantastic to see such beautiful clips played on the big screen and had me on the edge of my seat. You’ll root for Jonas. You’ll hope that he succeeds in his endeavors so that the rest of the community gets to experience what he does. The Giver is a rare page to screen success.