As kids, we’re fascinated with movies that unleash our imaginations and paint creations made by our mind’s eyes, filling us with a giddy stupor. And as we get older, movies tend to become an emotional outlet that we plug into; they charge us with feeling. Interstellar, a trip and a voyage both literally and figuratively, delivers on both levels. It’s a modernized Manifest Destiny of the future, destined to expand not across continents but into the farthest pitches of the endless black void we crane our heads towards. The 3 hour trip is dense and complicated and arresting (See it in IMAX, it’s otherworldly). Yet underneath the taxing scientific exposition and dialogue is a message of love that echoes symphonically throughout the entire story. What a profoundly heartfelt film this is.

The year is never specified but it’s clear the world were shown isn’t all that far off. Blight, a contemporary Dust Bowl, begins to kill off crops while corn remains sustainable. The dust blinds the sun and engulfs lungs, providing an imminent death by asphyxiation for all. Widowed Cooper (Matthew McConaughey) fulfills his civic duty as a farmer. But the former NASA test pilot would rather be playing Magellan and sailing the boundless black seas. His father-in-law Donald (John Lithgow) helps raise the two kids. Tom (Timothee Chalamet) is happy to farm like his dad. Murph (Mackenzie Foy), the apple of Cooper’s eye, is a thinker. Her hair’s kept up with a pencil and her bedroom is a small library. She won’t be fooled by the pages of her school textbooks that spew propaganda claiming the moon landings were fake. To them, space is just that…space. 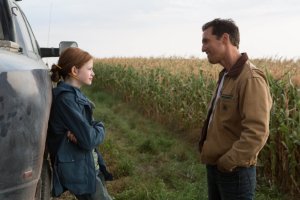 I’ll refrain from any clues or storylines that the trailers don’t already show. Strange, convenient, and somehow logical circumstances lead Cooper towards the underground NASA where he’s asked by Professor Brand (Michael Caine), his old instructor, to pilot the mission to save the human race. How long will he be gone? They can’t say because they don’t know. Tom accepts his father’s departure while Murph swallows the tough pill as abandonment. That’s the soul and the spirit of the film. Cooper promises his daughter he’ll come back, that they’ll be together again, whenever, wherever that may be.

The four man crew and one robot mission takes flight following a masterful cut from Cooper’s truck to the spaceship’s liftoff. Doyle (Wes Bentley) is the navigator, Romilly (David Gyasi) is the physicist, and Brand’s daughter Amelia (Anne Hathaway) sits copilot. The most helpful of the bunch is TARS (Bill Irwin), a fancy R2D2, providing laughs and help but never becoming the menacing red dot of HAL 9000. Previous missions discovered possibly habitable planets through a wormhole, and it’s operation Endurance’s task to find the best suitor for human life of the three remaining options. From there, you’ll be left amazed and traumatized. 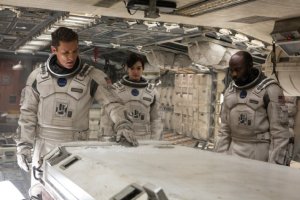 To commend Christopher Nolan’s effort in a single paragraph is borderline inexcusable. Sure, he has a $165 Million budget at his disposal, but no other director, past or present, could have made this film. Ranging from the jaw-dropping CGI and breathtaking IMAX sight and sound, Interstellar is the definition of a film experience. But it’s his old school flair that brings it to life. Miniatures are expertly used while the vastness and massive scale of the props and set design are something to behold. Nolan takes Kubrick’s masterpiece 2001: A Space Odyssey and gives it a warm human touch. It’s what true science fiction is meant to be, but it never veers too far off the grid of nonfiction. Nolan doesn’t just shoot for the stars; he aims for something that’s never been done. Love or hate the results, you can’t deny the sheer audacious ambition.

It’s a fact – Chris and his screenwriting brother Jonathan make faulty films. Their shortcomings never detract that much from their movies (save for TDKR), but it seems their concern with epic scope results in model films covered in pockmarks. In the first 45 minutes we meet the space team, but hell, Michael Bay does a better job with introductions and character development in Armageddon than this does. All the while the father child relationship of Cooper and Murphy is meant to be the skeleton upon which the flesh and bones of the story is laid. That doesn’t happen. They seem close, but never inseparable. As for poor brother Tom, he might as well have been cut from the film altogether. He has no purpose, and his absence would have provided the singular connection to earth and family and love that Cooper clings to while hurtling through space. Don’t get me started on the terrible sound mixing either. Just know some dialogue will be rendered so inaudible by Hans Zimmer’s drowning, albeit moving and operatic score, reminiscent of a piping organ clouding a mass’ liturgy, that you’ll wish you had captions.

What Nolan does well is direct his performers. It’s a great ensemble, and too vast to highlight each and every one, but a handful are noteworthy. Irwin as the sarcastic robot TARS enhances a film full of unexpected humor. I wish Gyasi had more material in a role that could’ve been juicy, but he sure shows promise in the few scenes he’s given. At this point Jessica Chastain delivers on a Meryl Streep like rate, and Foy makes your heart ache as the younger version of Murph. You’ll want to wrap her in your arms, wipe her tears, and whisper the same promise into her ears that Cooper does. Anne Hathaway is an enormous talent who’s always rubbed me the wrong way (maybe it was that Oscar acceptance speech), yet she presents a layered and committed performance as Amelia, the aviator so obviously named after Earhart. And you can all rest easy, because the McConaissance remains strong. I’d be floored if he received Best Actor buzz considering this year’s deep pool of candidates, but the guy just keeps getting better. Watching him and Nolan, two absolute master’s at the height of their craft, is an honor and well worth the ticket price.

Rarely do you find a blockbuster movie with such a clear message. Time is the single greatest form of currency we will ever have. But deeper than that currency is its intrinsic value, which by my esteem is the lasting effect we can have on other people, the positive or negative impact we impart on those we encounter every single day. But most of all, no matter how you frame it religiously or politically or through whatever filter you choose, it comes down to a simple message of love. In that respect, this blemished film achieves near faultless efficacy.

While watching this grand and spectacular movie, I was reminded of a memory quite the contrary, one that’s simplistic and evanescent. Some years back while vacationing in Mexico, I lounged and enjoyed some complimentary Modelo beers. Typical resort stuff. Then I saw something I’ll never forget. A toddler edged towards the side of a high drop off, his father came panicking, frantic, grabbed his son in the nick of time, then swaddled his little boy in his arms and anxiously laughed. I wish I had worn the same sunglasses to the movie that I had on that day. They would’ve helped mask the looming rush of tears. Interstellar makes you feel small with its haunting visuals and the numbing silence of space’s quiet vacuum. Then you remember that you should feel big. That you, a person in the here and the now, are made of the same bits and pieces of everything that ever has been and ever will be. That similar to love, we last beyond time. Interstellar, like life, is a magnificently imperfect blackhole that we’re all privileged to explore.

“Love is the one thing that transcends time and space.”