“Is there something there?”

Contrary to the celebratory nature of work promotions and Olympic podium ceremonies and battlefield war cries, life isn’t a game any one us ever actually wins. Some come out on top in spite of their flaws. Others drown despite their best efforts. Maybe famed actor and comedian Jim Carrey encapsulated it best in his unforgettable 2014 Maharishi University commencement speech. “Life doesn’t happen to you; it happens for you,” he said so matter-of-factly, his words embalmed and preserved in reassurance instead of formaldehyde. A Ghost Story shares this same sentiment and walks it to the edge of the soul’s cosmos, pit-stopping along the way to fuel up on pain and sorrow and existential examination, finishing with a swiftly freeing and self-inflicted coup de grâce. Living isn’t about marking a tally in the win or loss column; it’s about relishing the experience as a lump sum whole. You win some and you lose some. In A Ghost Story, those statements are one and the same, presenting a frustrating tale that’s as downright nihilistic as it is innocently hopeful, all while capturing the participatory nature of being alive. What a stunning reflection on love and loss this film is.

We only briefly meet them together. C (Casey Affleck) is a musician who adores their weathered home. “We’ve got history here,” he says to M (Rooney Mara), his partner who’d prefer to move on from their rickety ranch. She asks about the small upright piano squatting in the corner, wondering if they’ll take it with them or leave it in the possession of the foul quarters. They don’t share much conversation through voice but speak volumes through nuanced eyes and intentional movements; C clings to the comfort of routine and M wants to write a new chapter in their love story. Then, on a dime, C dies in a car crash right outside the home. M identifies the body at the morgue, she leaves, the shot lingers on the body from afar, as if it’s creeping around the corner to see what shouldn’t be seen. And suddenly C’s torso rises. He walks the halls still draped in the white sheet, two hollow black holes serving as his eyes. As he travels down an aseptic tunnel, a light carves its way into the wall, the rays beckoning him forward. The ghost turns left, the light collapses, and we watch him wander. C’s physical life may have ended but his spirit still thirsts.

There’s a desperation in A Ghost Story involving the need to feel necessary. To be noticed, to be of service, to be present in any shape or form. C’s ghost lurks in the corners and sometimes stands so close he could be touched, watching M as she mourns and reluctantly moves on with her own life. She lies on his side of the bed. She listens to the last song he composed. And she cries as she eats an entire pie in one uncomfortably long scene. It’s a metaphor for her isolation and her emptiness, desperate to fill the time and space and her gut with anything at all, and it’s meant to challenge audiences into grappling with the changing speed of time. In spurts, A Ghost Story’s clock seems to madly spin forward like a hallucinatory nightmare, and at others it drags so long that we can practically count the seconds. If time is a construct, then David Lowery’s film deserves to be considered a masterful design of its architecture. 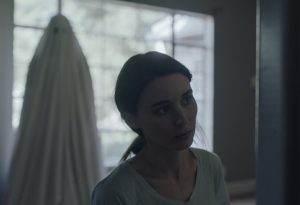 Lowery’s film is perplexing. Are we supposed to laugh at its initial simplicity and stubbornness? In some spots it does seem like we should, and yet as I grinned, the movie continued to play out so straight-faced and so quietly that I suppressed my chuckles and surrendered myself over to its method. This, I will tell you, quite matter-of-factly, is the only way to really watch and to understand A Ghost Story. Like a grandiose fisherman’s tale or a bonfire yarn, this film is less about believing what transpires on the screen and more about the feeling we’re meant to be moved by. In this peculiar case, Lowery invites us on a personal journey which transcends both time and space with its cyclical nature, sharing with audiences a story as intimate as the grieving process of death, as exploratory as a soul stuck in the middle, and as unknown as the universe itself. Lowery’s picture is like an elevator; it shifts between levels and spaces fluidly and knowingly, always with a new sight to see when the doors open. In that sense, it’s pure movie magic.

It’s easy to pass this film off as a gimmick. Place a recent Academy Award Winner under a sheet and have him react opposite his Ain’t Them Bodies Saints collaborator Rooney Mara and see what happens. Not so fast, though. Pay attention to and scrutinize all of the camera placement, the juggling of thematic tones, the ability to force us into submission. This is virtuoso directing by Lowery because he makes it seem so effortless and casual, and when you really consider his creative choices you begin to realize that this is a man with a vision. Take the still below for example. Middle of the night and we hear a slight crash. C inspects the house while M stands wrapped in bedding. No sign of forced entry and no intruder. Back to bed they go. But M’s heart is still racing – she says it and we hear it – and as C places his palm on her chest, their foreheads butted up against one another, her heart rate audibly drops and they fall asleep in each-others’ arms. This is blinding and binding love shown through sight and through sound.

The opening baffled me, the middle moved me to tears, and the final third left me in awe. Inspired by Wim Wenders’ angelic accords in Wings of Desire, the spatial reasoning of Tarkovsky’s sauntering Stalker, the drawn-out and rapid pace of Soderbergh’s adaptation of Solaris, and challenging the effects of time similar to that of Christopher Nolan’s Interstellar, David Lowery has given life to a film and a story well-aware of its own destiny. Years will pass. Corpses nestled in coffins will rot at different rates. The leaves of the trees will eventually stay brown come Spring. Water will run dry. The Sun will die and so will the Earth. These words that you’re reading right now will cease to exist, as will, unfortunately, everything else. This is the nihilistic side of this picture; it reminds us that all beginnings do in fact have an end. And still it remains hopeful, patient, kind, willing to wait itself into oblivion to find love once more. A Ghost Story embodies the ferryman’s ride of Greek mythology’s figure Charon, slowly paddling from here to Hades and back again. This film moved me beyond measure, partially because it visually represents that when we meet our maker, what we carry with us is ourselves and nothing more. No things, no money, no objects. And it assures us that letting go is indeed hard, that it takes time, and ultimately, that time is at our disposal. We can spend it how we want and we can waste it how we want. What’s most important is that we retain the memories, that we share, that we progress until we all eventually become a collective ghost story.

“We do what we can to endure.”