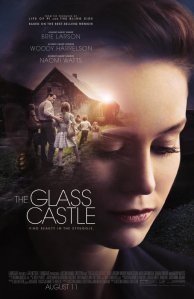 “Talking is not trying.”

Roughly halfway through Jeannette Walls’ subdued, resilient memoir, the family drives their beat-up Oldsmobile lemon through Oklahoma to mining country in Welch, West Virginia. While the Okies laugh and jeer at their jalopy, a window covered by a garbage bag and the hood strapped down, Jeannette hid beneath a blanket and refused to be seen. Meanwhile, Mom embraced the 15 seconds of D-list fame, waving and joking. She said to Jeannette, “Life is a drama full of tragedy and comedy. You should learn to enjoy the comic episodes a little more.” The Glass Castle acts on those words wholeheartedly, lightening up a dark and desperate tale of overcoming poverty to one that’s shades lighter and slightly less detrimental, a tad less personal, but no less emotionally affecting. It’s hard not to notice the film’s flaws; it’s just as difficult to be left unmoved by its power. 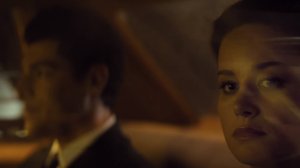 Jeannette (Brie Larson) writes a weekly gossip column, wears fancy clothes, dines in fine New York City restaurants, lives on Park Avenue with her fiancé David (Max Greenfield). It’s a far-cry from the vagabond squalor of her youth, and as she rides in the backseat of a taxi home from another meal with important guests, she looks out the window vacantly, imbued by Academy Award winner Larson with eyes in search of a life a million miles away from her current state of comfort. Anyone with a sliver of moxie has felt this way before, convinced that they’re happy when in fact they’re not, looking out instead of looking within. Jeannette has rightful reason for this self-reflection; her pilgrimage to New York was no easier than that of the Mayflower. And then she sees her Mom, Rose Mary (Naomi Watts), foraging through dumpsters and her Dad, Rex (Woody Harrelson), drunkenly dragging a cigarette and kicking the vehicle’s front bumper. They’re homeless, and, eventually, squatting in an abandoned building.

Sometimes kids turn into their parents. Other times parents regress into kids. And in the case of The Glass Castle, both sentences prove to be true. The children have an absent-minded Mother addicted to adventure and an absent but thoughtful Father addicted to booze and tobacco. She loves her old drunk and he loves his artisan. What’s so frustrating about these unfit heads of house is that they can be so loving and so damn unkind at the same time, pulling double duty by rearing their intelligent children with mixed moments of vitality and irreparably damaging them in equal measure. They move when bill collectors come, skedaddle from the hospital before ponying up money to the establishment, and are educated through stolen library books and the school of life. Rose Mary and Rex seem to raise their four kids by way of Ella Fitzgerald’s song Summertime. “Oh, your daddy’s rich and your ma is good-lookin’.
So hush, little baby, don’t you cry.” If only such idealistic thoughts were the truth. 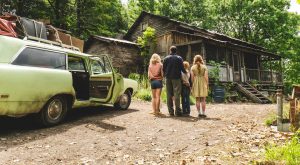 As a grown woman, Jeannette has become a realist and a con artist. She’s uptight and upscale, that twangy voice restrained but still rolling off her lips, a woman so determined to forge her path whilst abandoning her past. You are what you eat, or so they say, and instead of sharing butter coated in sugar with her siblings, she now eats to her fill, even asking for a to-go box. Contrary to the memoir, The Glass Castle adapts itself with adult Jeannette entirely in mind; she makes this machine go. Rather than building through Walls’ straightforward and brilliant prose, director Destin Daniel Cretton hops around in time, adding depth to the grown woman while diminishing the importance of her youth. Some scenes are combined, others rearranged, a handful deleted altogether. And that’s because rather than being a written story about a dysfunctional family, it’s an acted out film about a Father and the Daughter he sees himself in the most. 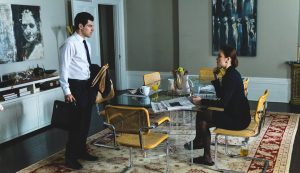 In that regard, you couldn’t ask for a better or more different leading duo. Larson knows how to calculate her cold gaze and to manage her fiery emotions; when her quiet swells into a squall of screams, you sense her understanding of the woman she’s playing and her own ferocity that’s being added to the character. She is such a powerful actor. And in the same breath, I honestly don’t think I’ve ever seen Woody Harrelson better than he is here. This is a casting match made in heaven, with Harrelson’s charming demeanor, his ability to convey a drunk stone cold sober, his fatherly warmth and his fragile ego always attached to those vivacious or glossy or bloodshot eyes. When he tells a young Jeannette out in the desert – her recent burn wound unwrapped and left to breathe a little – that they “ain’t like other people. We got a fire burning in our bellies,” Harrelson doesn’t even seem to be acting; he’s delivering one of countless sermons on his high and whiskey soaked mount, and it’s absolutely Oscar caliber work.

The morning I saw this film, I went to open a cabinet and grab a small juice glass for my breakfast. Out came a rocks glass, shattering on the tile counter-top, a few large shards left intact and others practically dust. Then on my drive in to the theater I passed the little trailer park on the right hand side, the house closest to the road resembling my mishap. A few weeks prior it had looked clean in the sense that it wasn’t the dirtiest of the bunch, and frequent passersby could tell a certain amount of effort had been made to spruce up the lot. Now, though, it was once again in shambles, as if a tornado had targeted the plot. Some, I’m sure, drive past and ask themselves the same slew of questions: “How could people live like that? Have they no dignity? No pride?” We can be so quick to judge without offering a proper trial. Maybe those people living in that trailer are doing the best they can. Maybe their problems outweigh the promise of their future. And maybe they just don’t give a damn what others think. Or maybe, just maybe, they are like that shattered glass, subject to the forces of the universe, or as Rex would have put it, “dancing along the border between turbulence and order.” The Glass Castle has a beauty to all of its disarray, its constantly harping dialogue, its hokey score, and is elevated by two lead performances that justify the fact that the closer we allow others to get to us, the easier it is to be hurt. And, at the same time, even easier to be loved.

“We’d have to be out of our minds to trade places with any of ’em.”