“Forgive me Father, for I’m about to sin.”

There’s no question that director David F. Sandberg knows what the hell he is doing. With last year’s fantastic Lights Out and now with Annabelle: Creation, it’s crystal clear he understands how to terrify his audiences. Both films have shared qualities: scenes linger while we scan the background for movement, lights flicker on and off anticipating a fright, and the frames often hide the danger just out of sight. However, his second feature-length film is as nerve-wracking as it is alarmingly and foolishly underwritten by Gary Dauberman. Annabelle: Creation conjures up a few remarkably intense scares, but it’s too bad those moments can’t escape the incompetent and seriously stupid script. There’s a big difference between being frightening and being altogether uninteresting. This film forgets the importance of elevating the latter.

The setup doesn’t make a doggone lick of sense, which in the horror genre really is fine because, as is normally the case, it establishes the unbelievable nature of everything yet to come. How else are we to supposed to believe a demon inhabits a doll unless the opening act is just as implausible? And so we travel with Sister Charlotte (Stephanie Sigman) and the girls of their closed down orphanage to a new home, somewhere I assume to have a Bible Belt zip code given the film’s blatant religious overtones. There they are tepidly greeted by Samuel Mullins (Anthony LaPaglia) and his mostly off-screen and bedridden wife Esther (Miranda Otto). Samuel used to be a doll maker – a successful one, as the massive house would imply – and he still grieves the loss of his young daughter 12 years prior. His main message to the girls is clear: an upstairs bedroom door is locked for a reason, and it is to stay locked. Annabelle: Creation acts as if such rules aren’t just meant to be broken, but to be ignored altogether.

Janice (Talitha Bateman), a young Polio victim who limps along the hallways with a cane and her leg brace, is too visibly a soon-to-be victim. She is the prey. Nighttime entices her towards that off-boundaries door, now unlocked by the evil lurking inside, and she stumbles inwards, looking around so curiously that we know she’ll be the target. The terrorizing of this girl builds sadistically, maturing from jump-scares to straight-up horror. Janice voices her concerns about the home to Sister Charlotte, who in return assures the girl that she may be physically weak but is strong in spirit. In that regard, what happens next should label Annabelle: Creation as a massively mistaken contradiction of faith-based folly.

Giving credit where credit is due, Sandberg still directs the young cast well. Talitha Bateman impresses as a massive talent who can play weak and sweet and sinister, and Lulu Wilson acts her heart out as Janice’s sister Linda, effortlessly looking as terrified as a deer staring at a big rig’s headlamps mere yards up the road. On the flip side, Anthony LaPaglia – for whatever indiscernible reason – delivers a performance that’s as stiff as a board and light as a feather. It’s less a horrible creative decision and more a totally and tonally miscalculated one. Why he’d invite these girls into the pits of danger is a great moral question. Neither he nor the flatlining script can give even the least plausible justification. 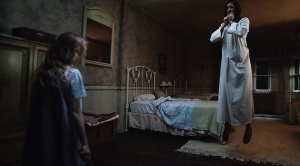 Overlong and overworked, Annabelle: Creation probably should’ve been about 10-15 minutes shorter and likely would’ve been better with a lighter load to drag around. As is though, the opening slogs along with setups that diminish the surprise of the payoffs later on, and turns into an exposition laden finale more inclined to haunted house gore than the promise of its early character driven setup. Annabelle: Creation made me dart my eyes away from the screen because it can be so severely intense, but unlike Lights Out, there’s not nearly enough personality or an adherence to defined rules for this forged schlock to feel as fine as it looks. Great horror films have a presence that fills our shadows afterwards. By comparison, Annabelle: Creation gets us to shake in our boots for 109 minutes of translucent entertainment, and afterwards we sweep it off under the welcome mat.