There has been an interesting phenomenon at work in the horror industry. Back in the late 70’s and up through the 90’s, a movie’s musical theme meant just as much to the story as the characters themselves. Not only did we see what the villains looked like, but the sheer sound of the score made us envision their presence. Last year’s It Follows is a rare, albeit lackluster, example of this technique. Nowadays, the genre opts for drowning and elongated silences all leading up to a scare. Whereas a memorable soundtrack creates an association, the current use of quiet generates psychological detachment. That may be an exploitation of primitive fears, but when done as well as it is in Lights Out, the results become unnerving. This movie scared the hell out of me.

An effective opening sequence introduces us to the terror, a lumbering and gangly figure with elongated fingers plus squiggly hair who only exists in the darkness. We later come to find out her name is Diana, an old friend of Sophie’s (Maria Bello) from back in their youth. Diana died and has returned in the physical form. I won’t tell you how or why or spoil the facts behind their relationship; the film works better the less you know. But Diana wants her friend to herself, which isn’t good for Sophie’s son Martin (Gabriel Bateman), calling upon his older step-sister Rebecca (Teresa Palmer) to intervene. Becca fled home years back and reluctantly returns to help her brother because she’s been through the same ordeal. Being afraid is part of their bond. 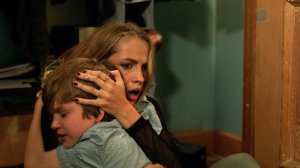 For those with privileged upbringings, you can typically think of a mother and a home as sanctuaries. They’re safety nets to provide protection and warmth and a sense of security. That’s why Lights Out feels so refreshing; the evil isn’t just invited in by their parent, but even allowed to join for movie night. Of course, there’s a reason for Sophie’s behavior, which again I won’t divulge. Yet do know that she goes from being labeled as crazy to victim to Mom for a number of reasons. What starts as a genre flick without much depth sneakily evolves into a maternal drama about forgiveness and family. That can only happen for something of this nature if it has an adept cast, which certainly is the case here. Bello has the range, Bateman has that jejune quality, and Palmer wears her emotions on her sleeves. All three shine. Don’t forget Becca’s “boyfriend” Bret (Alexander DiPersia) either, a guy who says he is good and backs it up with his actions. Characters in American horror films normally aren’t this polished and unique. 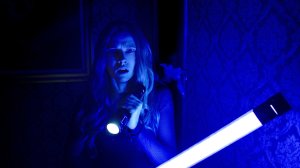 Carrie, Rosemary’s Baby, Mommie Dearest. There are plenty of classics that certainly inspired Lights Out. However, it’s undeniable how closely it resembles 2014’s Australian film The Babadook (on Netflix, make that your next watch). That film by Jennifer Kent is one of the genre’s best of the decade, and a more focused study on fear, but that doesn’t mean David F. Sandberg’s feature-length debut should go unnoticed. His film may be inferior in overall quality, but stands alongside Kent’s picture in terms of the emotions and conditions of distress that it calls forth. The only issue is that there isn’t a distinct set of rules for Diana other than living in the dark and disappearing in the dazzle. Had it done so, I wouldn’t be afraid to call it one of the year’s most entertaining movies. Because of that boundless mindset though, the film has an appreciated unpredictability quality to it. Allow Lights Out to haunt you for a brisk, terrifying 80 minutes. Then go home and flip all of your switches on. This one sticks with you.

“Sometimes the strongest thing to do is just to face your fears.”