“Who are we if we can’t protect them?”

I normally try to avoid opening night for blockbusters / horror films because the unpredictable crowds always scare me. Walking into A Quiet Place, a surprisingly PG-13 rated movie (if kids can handle this, they can surely handle a little nudity and sex to go with all that violence), all I could hear were immature young men talking in squeaky voices, popcorn being crunched, drinks slurped, and the animated shutter of countless iPhone cameras. “This is my nightmare,” I thought, especially as a trio of kids (who were 10 at max and definitely told their parents they were actually seeing Sherlock Gnomes) came sprinting down the stairs. Then the lights went dim, the film began, and for 90 straight minutes I didn’t hear a single peep outside of a shriek or a scream. A Quiet Place takes its title literally, transforming the noisy theater into a contemplative and communal place of prayer where all walks of life are welcomed to carefully consider the effects of dread and regret, and it’s likely to be one of the most efficient, emotional films you’ll see this year.

The Abbott family rarely speak. Zilch. Nada. Hardly a sound made between them. Food is passed around the table in leaves and the plates set on a noiseless cloth. Lee (John Krasinski) is the patriarch, a kind and stern man who says “NO!” with such silently lasered eyes that we easily comprehend his nix. He’s the natural protector. By comparison, wife Evelyn (Emily Blunt) is the nurturer, a calm and collected voice of reason who offers assurance. After great tragedy – and an open that sets up this world better than almost any other of its kind – the children are in disarray. The cautious and weary Marcus (Noah Jupe) needs to find bravery. The deaf Regan (Millicent Simmonds, as tremendous here as she was in the beautiful Wonderstruck), needs to obtain a level of redemption. For all of the tightropes and plank walks, A Quiet Place can be reduced to a film about family. How we treat one another in times of trial. How we suppress the emotions circling in our core. How water can boil over when left unmanaged. And how the relationships between parent and child – and how they change with the times – are purely symbiotic, to the point that we evolve from teacher/student to dueling professors in the way of life. The lack of sound only makes the blind belief and the trust they share all the more eye-opening 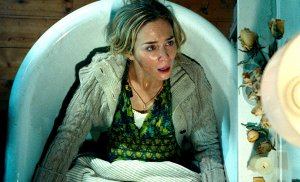 A Quiet Place has a lot to vocalize about how we relate to one another on different levels, but I’m not sure any of it is more meaningful or as ubiquitous as the battle of life against death. This film refuses to give in to the grim reaper or the uniquely drawn devil hopping about on each of our shoulders. Neither should we. Socrates allegedly once said, “the unexamined life is not worth living.” And so, according to those unapologetic words, A Quiet Place explores a new brand of emotional development. These kids will never experience the world the way that their parents did, so why do these people continue on? Perhaps, I’d argue, because they don’t know any better, and because each generation – for whatever laundry list of reasons – hopes that its progeny outlives its predecessors. A Quiet Place has jump scares and threads a thin needle of terror, but it also reminds us of the great lengths we’re willing to go (let alone capable of weathering) for those who truly matter. Love is terrifying, and by that little definition, the film is a love story.

A Quiet Place is as scary as it is smart and takes a deeply empathetic approach to the dynamics of trust and belief set in a world where the enemy hunts you by way of sound, and therefore, where you’re forced to repress an intrinsic biological feature. No dry coughs. No cries during childbirth. No fits of anger. And for the love of God, please don’t have allergies. The high concept of the movie might seem too ambitious for its own good, but then you sit in the theater, and the numbing silence assures us that what’s happening isn’t just good or great…it’s absolutely visceral. We’re leveled by the tension. There have been other recent films to embrace the tenacity of silence (such as Don’t Breathe and Lights Out), but none have had such a soft and accessible paternal curb as A Quiet Place. Every single part of this story is included for a reason. 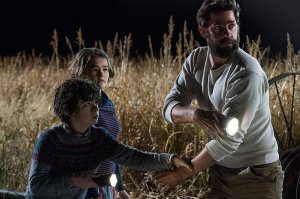 Wrought with suspended silence and forged from our most primitive sense of fear – which unequivocally resides in the realm of the damned and the unfitting unknown – A Quiet Place is an existential examination taken in a time of great crisis and constant duress. We tend to ask the most obvious questions in our most trying periods. “Can I do it?” “Am I good enough?” “What if I fail?” These are the kind of pleas which might make sense for all of us to ask even when they offer no satisfactory answers. They’re black holes, mirages, caverns. To assuage such thoughts, A Quiet Place has scares aplenty and enough tension to bite a nail to the cuticle, and it offers us assurances through the many facets of sacrifice. About the lengths we’re willing to go to and the hurt we’re open to endure in order to ensure the safety of our loved ones, and it’s an exemplary vision of the human race’s uncanny ability to adapt or die. In this case, it comes down to a toy rocket, a roll of the dice, a rusty nail, a storage silo, and a proclamation of love signed through the language of the hands that’s understood through the connection of the eyes. I was scared, although never afraid during this film, and I suspect that’s because it’s so full of love.

Back in my 2016 review of The Hollars – a terrible attempt at indie eccentricity which I still can’t wrap my mind around – I wrote that John Krasinski should never be allowed to direct again. And for the umpteenth time I have happily been proven wrong. A Quiet Place has been made with the finesse, great skill, and the palpable heart of a filmmaker imitating an exaggerated portrait of his own life. To raise a child feels impossible. To grow up feels unbearable. And here the two converge into a place of harmony. Through Krasinski’s determined eyes, Blunt’s poignant expressions (keep your spots open, Oscar voters; she’s worthy), and through these two amazing child actors, the picture raises your heart rate not through the tightening of a blood pressure cuff, but through an emotional investment in this family’s well-being. It doesn’t matter if we believe what’s on the screen because we believe their every intuition, expectation, and instant reaction. What’s real isn’t seen through our eyes; it’s through our connection to the performances of the actors, and boy do they sell the unreal. A Quiet Place capably pantomimes the darkest parts of drama and the furthest pitches of the imagination, allowing us, in the end, to have hope and to believe even when we’re ready to surrender. It’s true what they say – where there’s a will there’s a way.