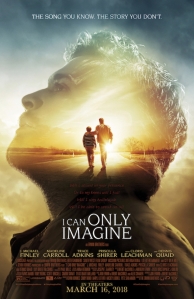 In the same way that I struggle to recommend or even enjoy many animated kid’s movies nowadays, faith-based films (specifically the countless Christian productions flooding my Midwest cineplexes) tend to fall into the same category. Yeah, your kids will cackle at the talking piece of poop in The Emoji Movie. Similarly, if you’re Christian, it’ll be easier to overlook the glaring low production value of films like God’s Not Dead or The Case for Christ and agree with a story that only wants to affirm your beliefs instead of strengthening them through constructive debate or challenge. In both instances, the movies pander to their respective audiences. I don’t think that’s the case with I Can Only Imagine, a redemptive film that’s definitely Christian and ain’t afraid to show it. But just like the earworm of a song that it’s inspired by, the picture transcends religion to share a message that we all should be open to hearing; that forgiveness is as rewarding to receive as it is to bestow. 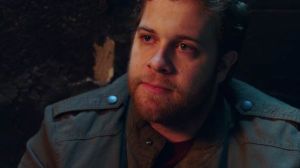 As the film suggests, a lot of great art is inspired by pain. That eponymous song by MercyMe – the best-selling Christian anthem of all-time and a bona fide crossover mainstream hit – came from the troubled youth of Bart Millard (J. Michael Finley, a reclusive Broadway star destined for the screen). His abusive dad Arthur (Dennis Quaid, who at 60+ has a boyish grin as magnetic as ever) was more monster than man. Mom (Tanya Clarke) left on her own, afraid for her life. Because the film is PG, we don’t see much domestic violence on the actual screen, but we hear it and we feel it through the fear and fervor of the performers. Bart grows up, falls in love with Shannon (Taegen Burns as a child and Madeline Carroll as a young woman), and tries to connect to his burn-out Dad’s glory days as a local football hero by shedding blood and tears on the field (even the film knows how ridiculous it is to pawn Finley off as a high-schooler, with his friend saying, “that beard makes you look 35!”) Fate has other plans in store for Bart, though. This quiet guy is about to be forced to speak up, to chase a dream while outrunning demons, and to ultimately share his gift with the entire world. 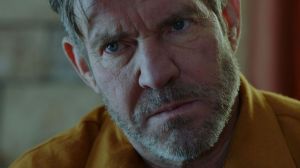 Most of the movie feels slightly off to start. The young kids desperately try really hard to play their characters but it’s a bit stagnant and all too unbelievable. I’d compare it to an unsteady The Voice audition where the contestant begins a bit shaky and nervous and nevertheless builds to a dynamic, pitch-perfect high note. Likewise, I Can Only Imagine has a humble beginning and a powerful ending. What launches it towards the top-tier and the upper echelon of this niche genre are better directorial eyes and stronger performances. Brothers Andrew and Jon Erwin know how to make a film, and here they’ve made one which caters to their core Evangelical viewership whilst inspiring hope in anybody looking for strength. They’ll only get better from here on out as real filmmakers; during the movie’s most integral scene, they constantly swirl and hurl the camera around as a physically suggestive way of moving us even though the story has already accomplished this feat. What should be dazzling comes off as dizzying, yet somehow no less emotionally enveloping. The Erwins might not have the best shot choices or develop characters in a way that feels authentic, but what’s most important is that they use a story to tackle universal themes with a PeeWee coach’s instructional form: head up, feet still churning, arms wrapped all the way to the ground. I Can Only Imagine isn’t a great film by any stretch of the imagination…and yet here I am, hours later, inspired by its empathy and its dogged pursuit of purpose. 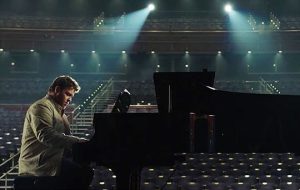 Much like last year’s The Glass Castle – a more open and worldly approach to the very same material, making sense of an agitated father-child relationship with a cosmic, scientific outlook – the livelihood of I Can Only Imagine lies in the hands of your chosen higher power’s healing, saving grace. Some of you might be like me, a renegade Catholic who still happens to believe in something beyond our tiny corner of the universe. Maybe you go to every Sunday service out of obligation or routine. Perhaps you’re on the precipice of conversion. You could even be of a different religious practice altogether. What makes I Can Only Imagine such an uplifting film is that it uses a specific platform to sing the praises of secular truths such as the rectitude of forgiveness, the earned security from hard work, and the guiding light of ambivalent hope in a way that we can all sing in our own variations, eventually joining in unison to belt out the line we all know so well. “I Can Only Imagine…”