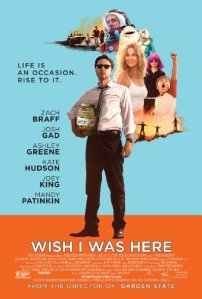 “For the next minute only, you can curse.”

Set in hiker friendly Los Angeles, Wish I Was Here is a film that’s as up and down as the bumpy trails of the Western Coast. It was funded through a kickstarter campaign that raised $3 million and it’s impressive what writer/director/actor Zach Braff was able to pull off with such a shoestring budget. Everything passes the eye test, but underneath the sun-drenched California backdrop is a terribly diluted story, one that needed less effort and touch and a whole lot more meaning. We’re supposed to laugh, but it’s not that funny. Then we’re urged to cry, even when you don’t know the characters. The title feels like a reflection of Braff’s inner dialogue while writing the script.

Our leading man Adain Bloom (Braff) lives the struggling actor’s life so common in LA. He pretends his wife Sarah (a wonderful Kate Hudson) works at her dream job even though it’s a drearily fluorescent and sardine-like cubicle. Their eldest Grace (Joey King) is devout in her faith while her younger brother Tucker (Pierce Gagnon) is preoccupied with video games and fart noises. Grandpa Gabe (a sternly sincere Mandy Patinkin) pays their tuition to a Jewish school to hammer in the faith, but he can no longer make the payments. His cancer’s back and has metastasized so he spends his remaining savings on a trial drug (that shouldn’t be a spoiler…you know it’s coming). As Aidan says, “there is so much bad news all at once.”

Evidently it’s all up to Aidan to play Mr. Fix It. He visits his brother Noah (Josh Gad) to deliver the news about their dad. Noah stands in socks and sandals outside the trailer he inherited from their mom with indifference towards the imminent death of his disparaging father. As the story progresses it becomes clear that Aidan is an egocentric lecturer. He chastises his brother’s ineptitude for life when he’s just as incompetent. It takes a blunt conversation with Sarah to drill into his head that things outside his own dreams matter. And when he takes up homeschooling the kids, they wind up duct-taped to chairs while he sits with a beer. It should be clear that I did not, and still don’t, like Braff’s character.

While Aidan is in turmoil, Sarah is the sole leavening agent that keeps him from collapsing like an amateur chef’s souffle. Kate Hudson, an actress I’ve never been particularly fond of, delivers a sophisticated performance. Joey King and Josh Gad are soon to be stars almost at the boiling point of celebrity (Gad is sooo close). The disappointment falls on the project’s helmer Zach Braff. He’s as uninspired as Aidan, and I think it’s more of a character problem than his acting, but at times I reviled him. Everything he does and every life lesson he teaches others finds its way back into his greedy pockets. Hey kids, sit on this rock where I once felt enlightened. Hey wife, go get a massage with money I took from our family swear jar. Hey dad, you’re dying and I disappointed you, I’ll go get you your favorite dessert. In such a beautiful filming location and a story ripe with opportunity to find genuine drama, I wish Braff had made his character skip the shortcut and take the scenic route. 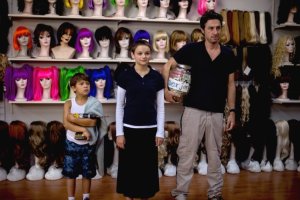 It’s hard to believe this is the same guy who pulled the movie making trifecta with his debut film Garden State. That movie is a deserving contemporary indie classic featuring one of the best film soundtracks ever compiled. This time around the story suffers from a severe identity crisis, and as for the soundtrack, I wish he hadn’t used songs so integral to other recent films (most notably Paul Simon’s Obvious Child from the movie of the same name). Braff’s sophomoric effort is briefly endearing, then oddly placed and abysmal scenes of a daydreaming Aidan moonlighting as a superhero come along and provide a sour note. The last shot shows little Grace with a shaved head about to take a leap of faith towards her father in a pool. For a movie surprisingly awash with religious doctrine, Wish I Was Here never has the courage to follow the advice from Garden State’s most notable quote and say to itself, “Good luck exploring the infinite abyss.”

“We move forward. It’s the only direction God gave us.”