“What are you thinking?”

Ever heard of the Nuclear family? A set of parents and their handful of children that happily live under the same economic and social ideals as everyone else? The vision of normality it conveys isn’t a color you’d paint the walls of your home with. Gone Girl takes the idea of the Nuclear family, soaks it in kerosene, and eagerly, patiently, flicks a match. It’s pyromania of the mind, showing us smart people who are as eager to destroy others as they are stupid enough to incinerate their own souls. I left the theater underwhelmed, perhaps because I finished the book the morning before seeing the film. Hours later and I can’t shake it. You’ll leave questioning whether or not you’ve ever truly known another human being, and you’ll wonder if anyone has ever thought the same about you.

The ostensibly Anacreontic (new vocab word I learned…just think lustful boozehound) Nick Dunne, played by the affable Ben Affleck, opens the film petting his wife’s hair, debating whether or not bashing her head in would help spool the thoughts out of her skull that he can’t seem to find. We never get the sense that he’d do it, all the while, it always feels believable. Nick is the type B personality to his wife’s type A. He’s laid back, a lickspittle. The out of work writer moves back home to Missouri from New York to care for his cancer addled mother. Nick is a baby. A momma’s boy. The guy men want to be and the type women swoon over. The kind you see in a Lifetime movie that gets the death penalty.

Amy Elliott Dunne (Rosamund Pike) is THE girl. She’s the one most guys are too intimidated to talk to at parties. Her psychologist parents based a successful series of children’s books around her called Amazing Amy. Even when she got cut from volleyball freshman year, Amazing Amy made varsity. It’s a game of catch up she will never win, a persona she can never actually be. It ruins her. Amy is an updated version of Goldilocks, one that is conniving and thoroughly disciplined in the art of revenge. She wants to win, always, and will go to any lengths to not be denied.

On the morning of their fifth anniversary, Nick sits at the watering hole he bought with the remains of Amy’s depleted trust fund called “The Bar.” How meta. His nosy neighbor calls…the cat is out and the front door is open. Upon returning home, Nick finds that his wife is missing and there are signs a struggle took place. She’s gone. Officer Gilpin (Patrick Fugit) and Detective Boney (Kim Dickens) arrive and there starts the hunt. Gilpin deems Nick guilty from the onset while Boney saves her judgement trying to form a proper investigation. They find a clue, literally labeled clue one, which is the start of a treasure hunt Amy plans for their anniversary that ends in a present. The gift for the fifth year is wood, in case you were wondering.

To go any further would be to compromise the foundation of twists and surprises that Gone Girl is founded upon. I can not and will not do that, because this movie, unlike so many others, earns them. It’s like the hardworking kid bussing tables past his shift, staying longer than needed but merits every cent he sweats over. The script by the novel’s best-selling author Gillian Flynn is outrageously good, giving us the perfectly abridged version of a truly great book (Read it. Now.) There have been qualms with the dialogue, but that’s purposeful. These characters are not themselves at any one point. They’re sketches of individuals who are comprised of outside influences, of art and movies and literature. If it feels fake, it’s because the characters are.

David Fincher never ceases to amaze me. The man doesn’t know how to make a bad movie. No one else, in all of cinema, has as vast a knowledge for camera placement as him. Seriously, watch this excellent video. You’ll be amazed by the technique and precision he displays. His typically distinct color palate and the outstanding score by Trent Reznor and Atticus Ross help enlighten the viewers on the tone, the setting, and everything in between. Fincher takes Flynn’s script and uses it to comment on our society. The pill-popping, bottle-swigging, credit card swiping philanderers fickle enough to be persuaded by Nancy Grace like attention seekers. Protesters gather outside Nick’s home like soldiers holding Molotov cocktails. The film is as much about our culture as it is about the human psyche.

What a tremendous supporting cast as well, highlighted by Carrie Coon as Nick’s twin Margo. Tyler Perry gives his best performance to date (not hard to believe since he’s usually in drag) as go-to defense attorney Tanner Bolt. And Neil Patrick Harris is surprisingly and methodically creepy as Amy’s old ex Desi Collings. Fincher hired Affleck because of the public scrutiny he’s personally endured and it paid off. The guy, with his disgustingly fake grin, can’t look innocent regardless of how hard he tries. As Amy, Rosamund Pike owns the film. She’s Blanche DuBois and Virginia Woolf wrapped into one. Whether it’s flashback sequences reenacting her incriminating journal entries or the current time, she is captivating and terrifying all at once. 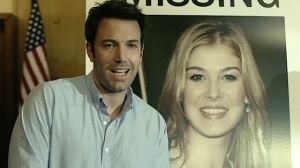 A quote from the novel perfectly describes the film. Amy writes of her affinity for Nick, “We are one long frightening climax.” That’s the same relationship we as an audience build with the film. You’ll be shocked, weathered, and exhausted by the web of lies spun by these two black widow protagonists. The famous playwright George Bernard Shaw once said, “The liar’s punishment is not in the least that he is not believed, but that he cannot believe anyone else.” I’ve always found that to be hauntingly accurate. Gone Girl will prove to be too dark come awards season despite a bevy of effective gallows humor. Who cares. What a twisted, mechanical, effectively chilling film this is. Oh, the things we do for “love.”

“This man may truly kill me.”