“It’s hard to see people from your past when your present is so cataclysmically screwed up.”

The “confined family that hates each other” is a niche genre that’s common territory in films past, present, and certainly the future. It’s relatable. Almost too much so. I always struggle to see the characters for who they are instead of inserting my own neurotic family members into the field. That’s what happened here. The surprisingly more dramatic than comedic This Is Where I Leave You (TIWILY for short) filled me with the kind of disappointment a parent must feel when saying that same word to their kids. You’re not mad, you’re not angry, you don’t hold an ounce of resentment. No…you’re letdown, because you know how much better they could be.

Judd Altman (Jason Bateman) lives the life he tried so hard to avoid. He produces a douchey radio shows and lives in a pleasant New York apartment with his detached wife Quinn (Abigail Spencer). It’s her birthday and Judd makes sure to get home early and surprise his spouse with a fancy personalized cake. Instead he finds her in bed with Wade Beaufort (Dax Sheppard), the host of the sleazy radio show and Judd’s boss. He walks to the kitchen to sit and blows out the candles on the cake. He’s listless.

Judd’s sister Wendy (Tina Fey), the only sibling he really gets along with, piles on the bad news when she calls to say that their dad has passed away. As it unfortunately is in real life, such a dire circumstance is the only way to finally bring the family together again. Paul (Corey Stoll) is the old and responsible one. He’s married to Annie (Kathryn Hahn), a former girlfriend of Judd. Wendy’s a mother and a wife to the stereotypical worker ant with a cellphone glued to his ear. The baby of the family is Phillip (Adam Driver). Adulthood doesn’t appeal to him nearly as much as fun and irresponsibility do. They’re all distinct but still share commonalities that make the family feel real even in the most staged scenes. 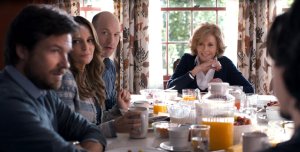 The timeless, age defying Jane Fonda takes on the role of matriarch Hillary. She grounds her children and forces them to go through Shiva for their father; he was a Jewish Atheist and they sit in the spot where a Christmas tree used to call its home. Most movies find the relatives coming together out of tradition for a holiday or a major celebration. TIWILY finds a broken family reconciling over the loss of a husband and a father. All the while, he’s really only more than a punchline in 3-4 scenes. You can’t build familial dramedy around a character that doesn’t exist. The actors do their best, especially Fey and Bateman with swell dramatic performances. I had hoped for its EKG reading to start beeping and suddenly spike. It eventually and grudgingly flatlines.

Have you ever been to a shoulder to shoulder party and thought, “this would be great if some people left to make room”? You still have a good time, some howling laughs and a few truthfully enjoyable conversations. Then you leave, probably after staying longer than you anticipated, and imagine what the night could have been. That’s the quicksand TIWILY proudly walks into. Director Shawn Levy actually balances the dramedy well, yet this book adaptation is so overstuffed with unfulfilled plotlines and side characters, some that magically materialize and just as easily disappear, that my suffocated mind was close to an aneurysm. I have yet to beget a child, but a fatherly sense of disappointment still ebbed from me like a tide out to sea destined to never return. TIWILY fails to flow back ashore.

“You guys are idiots, but you’re my idiots.”