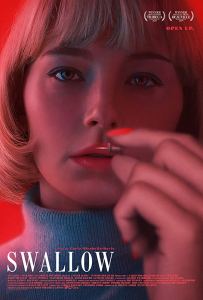 “I did something unexpected today.”

The most fascinating film so far in 2020’s truncated schedule may very well be its most oblique. I’m talking about Swallow, a jagged little movie with a unique taste and a penchant for the unexpected, and it’s the kind of voracious, infectious experience you will not soon forget. It’s a cautionary tale about a silenced and stilted young woman’s drastic reaction to her suffocating surroundings, and it depicts the ways in which she goes about becoming full and feeling emotionally satiated. Swallow is disturbing on the surface level and is oddly satisfying with its pro-choice and fiercely feminist resolution, making for a picture that more than delivers on both a tangible and intellectual level.

The film is led by Hunter Conrad (Haley Bennett). She’s a young, bosomed, objectively beautiful blonde sporting a bouncy bob. Hunter’s newly married to the aptly named Richie (Austin Stowell), a distant and otherwise disengaged grown man prospering financially thanks to some good old fashioned nepotism. He’s to take over the the family business, whatever that might be. Hunter and Richie move in together as most serious couples do. The homemaker decorates and designs and lounges around until the patriarch comes home for supper. Yet Hunter never feels adequately appreciated or seen. She’s cast as more of an ornate, voluptuous decorative piece than she is a mature adult. Her lavish life is unfulfilled, and Richie seems to love the idea of who she can become instead of who she actually is. Hunter’s appetite takes her to unexpected places.

As a woman who’s graduated from working retail to a life of care-free luxury, the idle hands and the precarious mind of the recently pregnant Hunter becomes tethered to a predestined future she’s married into via vows, but she hasn’t been completely sold on them either. It’s abundantly clear from the onset that she’s different from and vastly more modest than her highfalutin in-laws, trying to check their boxes and to assuage their wanton wants of her superintendent of a husband. She’s a pretty prisoner. But as the film progresses we come to learn more about Hunter’s troubled past, and the brilliant script slowly introduces us to her cavernous, confusing oral fixation known as Pica in the medical society. Hunter craves internal feeling, and swallowing inedible objects gives her a sense of agency. The body horror and the glee come into play as she gradually downs more and more dangerous items.

What’s most remarkable about Carlo Mirabella-Davis’ daring debut feature film is how he manages to keep our eyes fixed on the screen whilst simultaneously making our irritable innards toss and turn and tighten with every twinge. This is a demonstratively obscene, thoroughly complex film with superb taste and a stunning lead performance from the mesmerizing Bennett, all of which adds up to a movie that should be suckled at and savored from start to finish. It’s a visceral, stunning picture about the dangers of the causes and effects fostered in a truly toxic environment, and it ratifies its convictions by giving its heroine the power to pave her own way and to do as she pleases. I felt like I was watching David Fincher’s masterful Gone Girl blended with the rich, scarlet letter color palette of Argento’s Suspiria from 1977. It’s that contentious, critical, and spellbinding.

Oppressed victimhood and repressed trauma build throughout Swallow in ways that surprise and give us genuine moments of disbelief, forcing us to question the pleas and the plight of its pretty protagonist. That’s done on purpose. You can’t argue that the film isn’t daring enough to consistently push the envelope, or that it’s willing to gnaw at, alienate, and devolve its own sense of being until it gets down to the bone. It’s an empowering movie about becoming whole, about feeling something rather than nothing at all, even if that ties pain and pleasure in a twisted knot, and Swallow‘s final scene reiterates a woman’s right to choose no matter the time or the place. It registers repulsion. Its compulsion loiters. It scratches the throat and tickles the digestive tract. Swallow is a movie you can’t help but feel on a sensory and sympathetic level. And it’s damn near perfect.