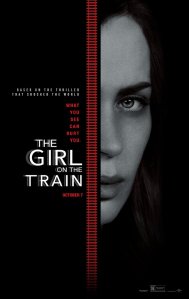 “We were the saddest people we knew.”

The abundant stories in The Girl on the Train are the products of pretty people who get bored too easily. Their lives look well-manicured, but the quote above is just one example of the overt malaise they inflict upon themselves, practically inviting an enveloping wave of sadness to flood their hearts. Infidelity and mystery are the two ingredients fueling every erotic thriller, a genre that the film tries to present itself as. Here’s the problem though: the thrills and erotica aspire to the greatness of Gone Girl but look and feel every bit as lukewarm and formal as Fifty Shades of Grey. The Girl on the Train is an expired date night movie, delivering more heartburn than it does heartache. 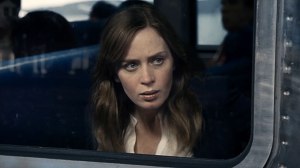 Based on Paula Hawkins’ breakout novel, director Tate Taylor improves the book in some respects while others completely pale in comparison. It’s certainly easier to follow these characters on the screen; having real faces to tack names onto makes for effortless recognition rather than picturing them yourself. Seeing these people in the flesh doesn’t automatically mean we understand their shared suburban nightmare though. Adapted by Erin Cressida Wilson, her screenplay lacks the sexiness to capture our immediate attention and the tension to hold us from there on out. Taylor takes us round and round and round looking at subdued sights, skipping to and fro in a timeline ravaged by uninformative flashbacks. What’s supposed to be a prestige drama becomes a mediocre B-movie. 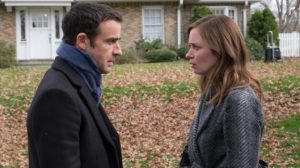 Not a damn thing about this movie sticks out besides the traumatic performance from Emily Blunt. As Rachel, she’s a woman in disarray, a sun up to sun down alcoholic who boards the train each morning with no destination in sight. Her life lacks purpose, and so she creates stories for the people she watches from her seat. Megan (Haley Bennett) has a perfect life, married to a perfect husband (Luke Evans). To Rachel, the pair become the embodiment of true love. Just a stone’s throw down the lane is the house she used to call home. Now it’s filled with her ex-husband Tom (Justin Theroux), his new wife Anna (Rebecca Ferguson), and their baby girl. Rachel looks through the window to a life she once imagined as her own future, and since she sees what she can no longer have, she looks to the new neighbors and dreams up what’s still possible. The voyeurism works well enough, until the overlapping storylines pool into a stagnant puddle. 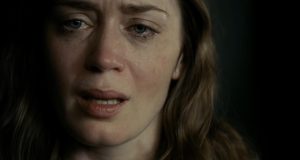 Rachel has another blacked out night, Megan goes missing, and then the film turns into a whodunnit the size of a hurricane; it’s easy to forecast and see what’s coming. With a less melodramatic tone and a shorter running length, I could even picture Taylor’s take on the material being a mild success. Something in the vain of 1991’s love affair murder story Sleeping with the Enemy but still not reaching Brian De Palma’s fantastic 1984 film Body Double. In the end, The Girl on the Train is a revolving door spinning and landing on an endless game of blaming and shaming. The film deserves to be blamed for being so bland, and shamed for wasting another standout performance from Emily Blunt. With her clouded eyes and puffy cheeks, Blunt descends into the pits of a woman whose existence is crushed between the vice grips of vodka bottles, held and controlled by poison. Everything about her work is right. It just doesn’t belong in a movie with this many wrongs.