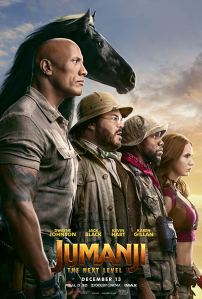 It’s not that I think Jumanji: The Next Level is a far inferior film than 2017’s Jumanji: Welcome to the Jungle, but more that it’s an inherently less interesting one. A Summer blockbuster setting has been swapped out for a wintry holiday atmosphere. The plot is essentially exactly the same, only with a few source code malfunctions bringing any sense of originality. And while the story itself has evolved from a forced The Breakfast Club friendship scenario for the digital age into one where these now college aged characters must find out who they are, the journey back into the game doesn’t make much sense. The Next Level is decent fun once we finally get where it so obviously wants to go, but the bookends aren’t quite strong enough to hold this one together. 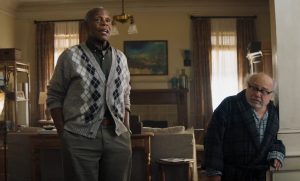 Spencer (Alex Wolff) isn’t handling life at NYU all that well, trudging through the snow and begrudgingly responding to texts from friends about meeting up during Winter break. He’s no longer with Martha (Morgan Turner), who’s made new friends and adjusted to college life. Once home, Martha meets up with Fridge (Ser’Darius Blain) and Bethany (Madison Iseman) to reconnect. He’s playing college football and she’s back from a mission trip abroad. But Spencer is missing, and the film uses his absence to introduce us to two new characters. They’re Eddie (Danny DeVito), Spencer’s grandpa who’s staying with them due to his bad hip, and his old friend Milo (Danny Glover), with whom Eddie once ran a diner. And as you might guess, trying to go into the game once more via a defective console brings unexpected challenges and surprises. 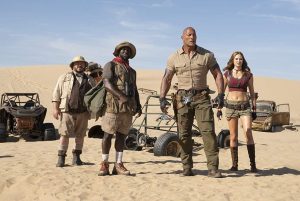 DeVito and Glover don’t actually get much screen-time, and are instead channeled through voices and demeanor once we reconnect with the familiar character options inside the game itself. Dwayne Johnson is back as the smoldering Dr. Braveheart, Kevin Hart plays zoologist Franklin Finbar, Karen Gillan returns as martial arts specialist Ruby Roundhouse, and Jack Black once again steals the show as the intellectual jack of all trades Professor Sheldon Oberon. All seem to be having as much of a blast as they did in the last adventure. And most of the fun in The Next Level comes from watching the talented quartet being challenged by shifting physical mannerisms and doing different voices depending on who from the real world happens to be inhabiting their avatar beings. It’s like watching a series of solid impressions from SNL auditions taking place inside a massive movie. 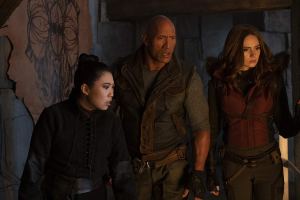 Just as was the case with Welcome to the Jungle, the villain in The Next Level (played here by the imposing Rory McCann) doesn’t really matter or bring anything to the table; he’s only there to present an empty threat and to be vanquished. And while the talented Awkwafina brings new life to this familiar story, most of the humor and camaraderie gets a little too drowned out by the very nature of the title’s “the bigger the better” mentality. Jumanji: The Next Level will please fans of the previous movie, mostly because it’s a familiar carbon copy with minor tweaks, more outrageous CGI set pieces, and a willingness to entertain no matter the cost. But the film also lacks invention, motivation behind decisions, and in some cases completely disregards personal stakes. Having said that, we’ll most certainly get another entry in this profitable franchise, and should the suggestive ending here stay true, the next adventure will at least be something more attuned to the sensibilities of 1995’s Jumanji instead of a big rehash of what we’ve already seen from this reboot.

“He only has a limited number of things he can say.”