“Extra is not the goal.”

Like an expedited package trying to get its Christmas cheer delivered as quickly as possible, Holiday Rush nonetheless experiences a few expected delays and suffers from some self-imposed speed bumps. This is a movie with good heart, a sense of soul and humor, and greatly benefits from understanding how the strength of a family unit can make or break the Christmas season. It does too much and has enough loose ends in sight to feel like you’re watching a literal hodgepodge, but Holiday Rush persists, and despite its many deep flaws, manages to resonate just a bit. 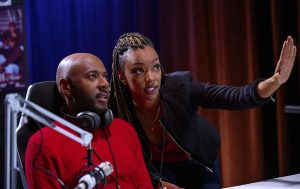 Rush Williams (Romany Falco) is an acclaimed R&B radio host and a widower living in a big home with his four children. The oldest Jamal (Amarr M. Wooten) just got accepted into Harvard. The materialistic Mya (Deysha Nelson) wants an Instagram worthy present to show off online. The twins Evie (Andrea-Marie Alphonse) and Gabby (Selena-Marie Alphonse) demand a miniature horse, even resorting to hopefully crowdfunding their small equestrian dream when Rush loses his job at the station mere weeks before Christmas. His friend Marshall (Deon Cole) agrees to follow along with the new studio manager, and Rush is squeezed out, forced to find a new stream of revenue with his longtime producer Roxy (Sonequa Martin-Green). In the meantime, he’ll sell the mini mansion and move the family back in with Auntie Jo (Darlene Love), still living in the home where Rush first raised these kids, who aren’t humbled very easily to say the least.

Holiday Rush is basically three stories poorly folded into one shapeless piece of origami. There’s the tangible romance between Rush and Roxy, which is inevitable but also warming as he confronts the loss of his late wife (La La Anthony). The kids are a nightmare to start yet they eventually come around, and scenes with Rush and Jamal are actually quite emotional. But the oddball of it all comes through the greedy business people trying to squash a man for no reason. These are such poorly, thinly written antagonists who are evil because that’s their brand, and a better script either wouldn’t have given them the time of day or would have gifted them some sort of motive, especially with how silly some these scenes tend to play out. Two thirds of Holiday Rush is worth watching and the rest is comically inferior. 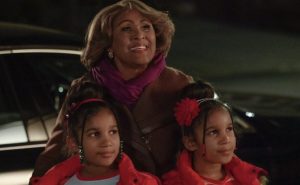 Holding down the fort though is Romany Falco, keeping the entire picture afloat with his charisma. He’s funny and charming and pulls off the dramatic scenes well enough, especially given how the film tends to err towards all of the worst tendencies of low-budget holiday fair. I also bought into the performance by Sonequa Martin-Green, who seems to be an empathetic actress that’s untested by the light tone of this picture; she’s done plenty of TV work and I can tell she has the prowess for a great dramatic role should she be given the opportunity. And while I wanted to like this movie, for every two steps forward it takes one back, never getting as far or hitting as hard as it should, and it’s another example of how a horribly hokey and generic score – so lacking personality – can completely undo the emotions stirred up in the most pivotal moments. Holiday Rush earns its few happy tears, which makes it all the more strange that it pridefully wipes them away a second later every single time.