“We’ll find a new definition of normal together.”

Another holiday season means another installment in Netflix’s A Christmas Prince series of films, and now more than ever, this third entry goes to absurd lengths to insert phony drama into the plot. It’s gaudy, makes little to no sense, and undermines the heart of the story by adding layer after layer of melodrama. A Christmas Prince: The Royal Baby actually works rather well when we’re spending time with the people involved, but it falls apart the more and more ridiculous it gets. This isn’t a bad movie; it’s just a convoluted and absurd one. 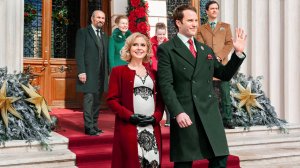 After you press play and before the movie starts to stream, we get a pretty thorough yet succinct recap of what took place in the first two films. The despised suitor to a Prince, followed by the dramatics of a wedding gone awry. This time around, Queen Amber (Rose McIver) and King Richard (Ben Lamb) have their hands full anticipating the holidays and the birth of their first child. There’s also the matter of renewing a longstanding truce with the leaders of Aldovia’s ally country Penglia. They welcome Penglia’s more traditional royality King Tai (Kevin Shen) and Queen Ming (Momo Yeung) for the centennial signing of the document, except it’s somehow gone missing at the last second.

All of the familiar faces return this time around, as you might expect. Princess Emily (Honor Kneafsey) spends most of her time with Queen Helena (Alice Krige). The smarmy Simon (Theo Devaney) still lingers around, going so far as to invite Amber’s close friend Melissa (Tahirah Sharif) to the castle for the holidays, as well as chatting it up with his old classmate Lynn (Crystal Yu), an assistant to Penglia’s royal couple. There’s talk of a curse coming down if the document isn’t signed by midnight, Amber’s baby seems to be on the way, and snowy conditions show that the traitor is still in the castle. Everything builds up before it lets us down. 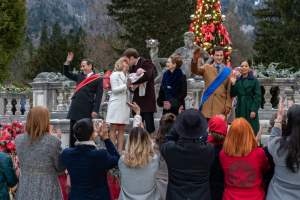 It’s almost impressive that A Christmas Prince: The Royal Baby is able to stuff so much into such a small package. But it could have been a worthy sequel had it just cut out all of the bogus theatrics and instead focused on the people. I understand that films of this nature – all over the airwaves during the holiday season – intentionally embrace outrageous plots that could be cobbled together through mad libs, yet that doesn’t make this one any less disappointing. I think it’s because design aspects are decently well done, the acting is above average, and it has an easy emotional hook. Unfortunately, the newest additions in A Christmas Prince: The Royal Baby don’t add much value, only making this present all the more difficult to wrap your head around.