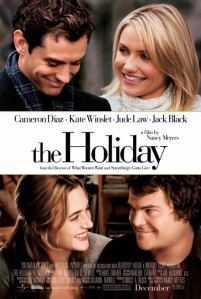 “You’re supposed to be the leading lady of your own life.”

Split into two sorely different halves – one of which is delightfully grounded and the other stuck with its stupid head in the clouds – The Holiday is a tiresome, overlong, and rather uneven hodgepodge that hits the highest of highs and the lowest of lows. At times the movie can be smart and sharp, and during other moments it’s no more believable than the cheap melodrama of an old dime store romance novel. The Holiday’s charms are too infrequent to overcome its largely false emotions deficient of real human spirit.

Over in England, the journalist Iris (Kate Winslet) suffers severe heartbreak during the work Christmas party. She has a gift for her longtime crush Jasper (Rufus Sewell), and he repays her by staging a marriage proposal to another colleague. Far away in California is Amanda (Cameron Diaz), a high-profile editor who cuts trailers for all of the biggest Hollywood movies. Amanda’s a cold-blooded and unsympathetic workaholic, leading her partner Ethan (Edward Burns) to seek passion and heat from other women. With the holiday season looming and both women in desperate need of a brief respite from their toxic surroundings, they join a house swapping website, both matching and eager to spend a few days in each other’s shoes.

Iris hits the jackpot in this exchange. Amanda’s digs are lavish, upscale, and I imagine entirely unrealistic for her job description. There she meets the old neighbor next door Arthur (Eli Wallach) who was a screenwriter during cinema’s Golden Age, and she stumbles across the film scorer Miles (Jack Black), an affable guy who encounters his own relationship problems. Iris intends to use the days for some needed R&R. Meanwhile Amanda plans to drink wine by the bottle, indulge in treats, sulk in the little stone cottage while blaring music. She almost cuts the trip short early until Iris’ brother Graham (Jude Law) comes knocking in the middle of the night, drunk and stumbling around only to find a beautiful blonde on the other side of his sister’s door. Only one of these stories feels the least bit real, and unsurprisingly it’s the story that prefers when its characters look at one another with compassion rather than lust.

While it should go without saying that Jude Law dutifully fulfills this role in his typical beguiling way, this time the deception comes from a place of understandable secrecy. He’s very good here, and conversely, I don’t think I’ve ever seen Cameron Diaz any worse than she is as Amanda. Diaz has never been an actress with the greatest – or any for that matter – sense of range, but there’s something so unnatural and completely fake about her in this film, and it’s never in an intentional or mesmerizing way either. Her half of The Holiday is the weaker written of the two, and Diaz’s Razzie worthy performance only does further damage to a film that’s likable enough yet mostly unbelievable.

At a grueling 2+ hours long, Nancy Meyers’ The Holiday is a film that would have been better off had it prescribed to a “less is more” mentality. A few scenes are endearing, but by and large almost nothing about Amanda’s soul-searching adventure pulls you in. I can only imagine what this movie could have been if the script was workshopped with voices other than Meyers, or if it had the wherewithal to shift its entire focus towards the budding love affair between the adorable Iris and Miles. The Holiday has a few great romantic moments that produce cardiac arrest, yet they’re clumsily doled out in between way too many moments that totally flat-line.

“Let’s get the embarrassment over with.”