The Mule owns a peculiar, engrossing true story buried somewhere in its great wealth of cinematic nothingness. Somewhere inside there’s an honest depiction of a hard-working, middle-class and blue-blooded American who’s been left behind by rapidly changing times. Somewhere inside there’s a family drama about a flawed man who lives to work instead of working to live. And somewhere inside, residing in a place deeper than other elements, is a self-reflective commentary ready to expose its casual display of ingrained bigotry. The Mule has all of these ingredients, and yet this frozen feature casts them down to the lake’s murky bottom, unable to penetrate the thick, calloused layer of ice that this film doesn’t make the effort to auger away at and fish for, settling on wearing a tired trademark snarl and a hardened affront. 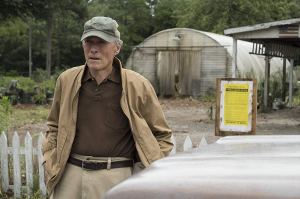 As the embodiment of an American Legion Post regular and an elderly horticulturist whose business has run its final race, Earl Stone (Clint Eastwood) needs work and he needs it fast. Rightfully estranged from his ex-wife Mary (Dianne Wiest) and the rest of the family, Earl prides himself on being a member of the patriarchy, a breadwinner who puts food on the table and provides a roof over their heads. He’s no longer needed though, sending a harsh yet truthful shock through his system. What’s a man worth once his only values – his physicality and his checking account – near their bankrupt breaking points? For Earl the answer is nothing. Maybe that’s why he becomes a drug mule; perhaps breaking the law is the only way that he can salvage the virile machismo of his downward spiraling ego.

The Mule can be interesting early on, especially when Earl is seen running around on his last legs, slower than he’d like but still amazingly sprite for his age. However, the film loses its subtle messaging when it hits the road and grants Earl an unsafe space to flex his rugged masculinity, introducing characters who are little more than moral backdrops for the old leading anti-hero to bully and box. As he delivers stockpiles of drugs and lines his pockets, Earl exposes himself as a self-righteous man who’d rather spend his afternoon buying a round of Crown at the bar than attend his granddaughter’s (Taissa Farmiga) wedding. Like the hamartia of so many people, Earl uses money as a shortcut means of earning respect and bestowing an instant contribution. The main problem is that these efforts come from a place of serious self-interest. His heart is empty and null and void.

Bradley Cooper and Michael Peña fill out this ensemble as DEA agents tasked with tracking down Earl. Clint Eastwood is notorious for his fast paced direction, setting up scenes and doing as few takes as possible, and it’s all too apparent in these stiff, hollow performances from two supremely talented actors. They can’t add weight to such an emaciated picture. That’s because, once again, Eastwood has made a true story feel autobiographical to his life rather than honoring that of the subject material. He plays the same character at ad nauseum, desperately trying to hold onto a version of reality that best aligns with, and doesn’t challenge, his admittedly tainted – for fear of bending to the point of breaking – ideological mindset. You should watch 2004’s Maria Full of Grace if you’re interested in an informative and more discerning picture about drug mules, or if you plainly desire a picture that doesn’t spend its time stuck in neutral or hydroplaning off the road.

“I thought you were dead.”