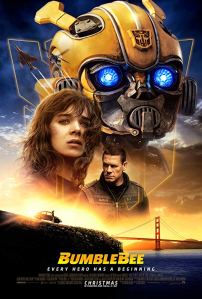 “People can be terrible about things they don’t understand.”

2007’s Transformers was good fun, a blockbuster in the purest meaning of the phrase, and a big-budget adventure that was far too obsessed with the lingering male gaze. It was rated PG-13, but it’s not hard to imagine its objectification of leading lady Megan Fox opening up a soft-core, late night adult feature either. It’s a good movie for what it is, and probably would have been more similar to Bumblebee had it been released today. By comparison though, Bumblebee is the more kind and smart and funny of the two, and is easily the best feature-length take on the lineup of the classic Hasbro toys to date.

Massive movies with giant sums of money on the line tend to abide by rather formulaic screenwriting and the prequel Bumblebee is, for the most part, no exception. We get all of the familiar story beats. War breaks out on Cybertron, Bumblebee (briefly voiced by Dylan O’Brien) flees to make camp on Earth, he’s tracked down by a few nefarious baddies called Decepticons. Meanwhile Charlie (Hailee Steinfeld) celebrates her 18th birthday as best she can. She spends the Summer riding a moped to dip corn dogs on the boardwalk for spending money, arguing with her mother (Pamela Adlon), shaking her head at stepdad Ron (Stephen Schneider), annoyed by her little brother Otis (Jason Drucker), and mourning the loss of her late father (Tim Martin Gleason). 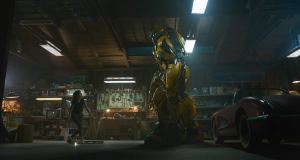 Charlie’s an outsider, a soft-hearted punk with an affinity for all types of music, and a young woman who’s still trying to find her way in the world. What she wants is a car. Any car, really, so long as its allows her to gain more independence. Charlie stumbles upon an old clunker painted an unappetizing mustard yellow Volkswagen Beetle at her uncle Hank’s (Len Cariou) scrap yard and the vehicle practically calls out to her. Charlie’s convincing in her plea and Hank is extra generous, which means she drives the abandoned jalopy off the premises free of charge. Bumblebee sets all of this up quickly, efficiently, and finally hunkers down in the moments where Charlie first meets the gentle robotic giant hiding in her garage.

Honoring the likes of The Iron Giant, Short Circuit, and a noticeable nod to The BFG by Roald Dahl (keep your eyes open and you’ll see those letters written on the back of Charlie’s aptly sleeveless mechanic coveralls getup), Bumblebee grounds the dizzying and blitzing action of Michael Bay’s previous films with a universal story about friendship and trust. Charlie scraps for parts, symbolizing an emptiness in her heart. Bumblebee cowers in the corner, now voiceless, sitting like a giant metallic dog waiting to be adopted. The movie is really rich and explosive and full of terrific nostalgic throwbacks, and Bumblebee uses all of these elements to tell a tale about a lonely girl and her loyal new friend with a Rock’Em Sock’Em Robots ferocity.

As delightful and surprising as it is, a few of the features on this thoroughly modernized classic ride are too extraneous for its own good. The parents aren’t granted authority of any kind, the boy next door Memo (Jorge Lendeborg Jr.) has as much personality as a shirtless greeter at a store in the mall, and the militaristic Agent Burns (John Cena) flip-flops his allegiances without enough rhyme or reason. Bumblebee survives these bumps in the road by being an earnest, optimistic, and otherwise well told story about two partners in crime. In his live-action debut, director Travis Knight doesn’t match the soaring heights of his 2016 stop-motion masterpiece Kubo and the Two Strings, but he does infuse this franchise with a nerdier and more entertaining outlook. Bumblebee delivers laughs and thrills aplenty, and it nails the puppy-dog eyes and the uncouth, childlike mannerisms of the robust robot at its center. That’s a major first for this series and hopefully a promising sign of things to come.

“Music can help you say what you feel.”