“I am not what you thought I was.”

Wonder Woman seems to have been conceived through a simple yet radical notion for the film industry; what if you made a gigantic superhero blockbuster not just about fighting countless foes fueled by rage and revenge, but instead allowed an unapologetic sense of altruism and kindness to shower the story and to tower on the screen? The short answer to that equation is this breathtaking, ambitious, philanthropic picture. Wonder Woman truly is in a category all its own as the rare female-fronted superhero film, but more importantly as the genre’s most unabashedly sincere and compassionate feature to date. I left the theater on a high, inspired by this movie’s generosity, graciousness, and overall goodness. What more could you ask for?

Young Princess Diana lives an idyllic island life on Themyscira, home to the Amazons. Their matriarchal foundation is meant to serve as the keepers of men, diligently and secretively watching over mankind, but over time they’ve become increasingly cutoff from their destiny and duty placed upon them by Zeus. Queen Hippolyta (Connie Nielsen) leads her people with grave concern for the possibility of war – primarily against a potential return from Ares, the God of War and Zeus’ son – without the desire to disturb the peace they’ve found. Hippolyta also doesn’t want Diana to become a warrior, and as nearly all children do, the youngster goes against her mother’s wishes to train with her Aunt Antiope (Robin Wright), general of the army. Diana shows grit, determination, and increasing power. It’s as if we ride alongside her in a tandem fashion, discovering her abilities and breaking free of the training wheels in unison. That’s vicariously empowering for audiences.

The turning point comes with the crash-landing arrival of pilot Steve Trevor (Chris Pine), a spy on the run after infiltrating WWI German forces. Diana (now a grown Gal Gadot) saves him from the wreckage, and soon after must battle troops of men who storm the beach like it’s Normandy. It’s a rave-worthy sequence, marrying the style of DC’s Zack Snyder slow-mo and the legendary Zhang Yimou’s acrobatics into one graceful and tactful balance beam routine. There’s good chemistry between Gadot and Pine, too. In a chess-like move, Wonder Woman counters cinema standards and undresses Pine’s character first, recharging in a hot spring while Diana enters the scene. It’s funny and it’s productive with its laser-pointer accuracy, practically calling out to male moviegoers and producers as if to say, “So, how does this make you feel? Because this is what it’s like for us.” Pine embraces the scene, Gadot infuses playfulness, and director Patty Jenkins imparts a critique of social standards without ever being patronizing or belittling. 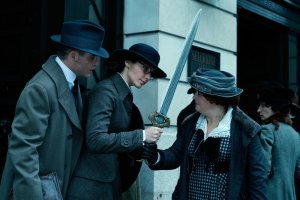 At 2 hours and 20 minutes, Wonder Woman has no shortage in the story department. Somehow it doesn’t feel that grueling either. Patty Jenkins has made an origin story with drive and with purpose, elegantly relaying exposition in a folk fable voice and balancing this mega-budget behemoth with the sort of care that can only come from a great director. Much of the picture relies on the relationship between Gadot and Pine, himself a war-torn man privy to lying and she a fish out of water incapable of rationalizing mankind’s destructive cruelty. Steve wants to capitalize on her powers to take out the nefarious General Ludendorff (Danny Huston) and his mad chemist Doctor “Poison” Maru (Elena Anaya). Diana can only compute such evil as that which she already knows, thinking this catastrophic war to end all wars to be one started by none other than Ares. In a brilliant move, Wonder Woman allows historical facts and a fictitious fate to intertwine as one, emerging as a tale influenced by time but never bound by it. A criss-crossed forearm salutation is deserved for this brave act of defiance and creativity.

You might have noticed that the Americana costume donned by Lynda Carter has been substituted for a darker, sleeker, more mute outfitting. That’s because the Wonder Woman of the now – as played by the brilliantly cast, endlessly charismatic, and completely kick-ass Gal Gadot – is a siren and a beacon of hope for all nations. This is a fact, and one that’s evident as Diana fearlessly jaunts into No Man’s Land. The sequence is one of the very best I’ve ever seen in an action film, allowing Diana to be a strong and fierce woman with a Mother Theresa heart. Jenkins plants a few great seeds of social constraints still held against women throughout, especially during the big final battle (which makes complete sense in its staging and folly in terms of the picture’s context). In those moments, Diana is verbally harassed and belittled, held in a choke hold, confined with arms at her sides. So how does she emerge victorious? Through empathy and through unrepentant love. It takes a massive village to make a film, yet in this case, sometimes it only takes one character to leave an indelible mark. I ask that you take my word for it and go see this film, because she’s an absolute wonder to behold.

“If you see something wrong with the world, you can either do nothing or try something.”